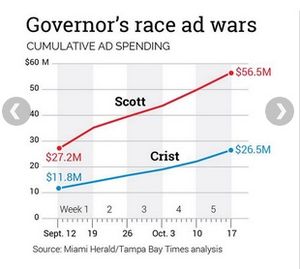 For the past year, living in Florida has meant having Gov. Rick Scott and Charlie Crist as constant and mostly unwanted companions.

If you own a TV, you get the picture.

For months, TV viewers have been forced to withstand a seemingly endless barrage of vicious ads from Scott and Crist as they try to trash talk their way to the Governor’s Mansion, 30 seconds at a time.

Scott and Republicans have spent $56.5 million on ads and Crist and Democrats have spent $26.5 million. Scott has bought far more ads in Tampa Bay than anywhere else: It’s the biggest TV market in Florida and Crist’s home base.

“Gov. Scott is betting his mansion on Tampa,” said Scott Tranter, a principal and consultant for a Republican-leaning data analytics firm, 0ptimus.

Using data from broadcast stations and the Florida voter file, 0ptimus has concluded that Tampa Bay viewers have seen the most negative ads from Scott about Crist, with 95 million impressions since Sept. 1.

That means a Scott ad has been seen in whole or in part 95 million times across the Tampa Bay TV market.

In a first-of-its-kind race where both candidates have been governors, voters say the two men have cheapened and demeaned the high office they seek. Their total lack of mutual respect is magnified by the fact that they refuse to address each other as “governor” and instead use “Rick” and “Charlie.”

UPDATED: Attorney General Bill McCollum continues to distance himself from two shadowy political committees running negative advertisements against his opponent, Rick Scott, but more evidence is surfacing about his campaign's close ties to the groups.

The latest is an email obtained by the Times/Herald that asks McCollum campaign manager Matt Williams "for final approval" of the attack ad run by the Alliance For America's Future.

Dated May 25, the memo was sent from a Philadelphia area media producer to Williams, John McLaughlin (McCollum pollster), Arthur Finkelstein (McCollum consultant), two McCollum media producer staffers and Mary Cheney, the daughter of former Vice President Dick Cheney who runs the Alliance, a 501(c)4. It asks for approval before the ad is sent by Marianne Campbell, McCollum's media buyer.

The memo is not the first link between McCollum and the Alliance. McCollum is also intimately connected to The Florida First Initiative, a 527 group also airing attack ads against Scott.

The group -- which has connections to GOP rival Bill McCollum's campaign -- is a 527 that registered in Florida in March and lists a registered agent at Ken Cleary and the email address of Alachua County GOP Chairman Stafford Jones.

Jones hung up on a reporter who contacted him Friday and McCollum's campaign said they aren't affiliated with the group. McCollum's TV buyer purchased the TV time for Florida First and did the same for a different political group, Alliance for America's Future, which previously spent $1.9 million to air attack ads against Scott.

The latest figures also show Scott spent $14 million from his own pocket on his campaign's ads.

At an impromptu press conference, Gov. Charlie Crist has announced that the extra $25 million is in the bank, and was received via wire transfer. It's ready to be spent on more TV spots promoting Florida's sugar-sand beaches. (The money, of course, was the subject of sharp criticism this morning at a Cabinet meeting.)

Crist's chief of staff, Shane Strum, will convene a task force on how to best use the money to "flood the market in the next 60 days with accurate information" about Florida's beaches and fishing areas.

Visit Florida director Chris Thompson, said the agency will develop a series of new ads that are specifically tailored for Northwest Florida. He called it a "broad stroke" message that could be amplified by matching dollars from media companies such as Clear Channel radio.

Crist said he hopes the ads aren't too late for Memorial Day weekend: "A lot of people make their plans late. It gives them the opportunity (to consider the Panhandle) if they hadn't made their plans yet."

"I think I was in bed and my wife finally said, 'Oh put that away,'" he said, referring to his cell phone (yes, his cell phone). He spent the night voting for his cousin's daughter, Didi Benami, who is a contestant on American Idol. The St. Petersburg Republican also sent an e-mail to his supporters, asking them to vote for Benami:

To everyone who is still awake:

My cousin's daughter, Didi Benami, has just performed on American Idol and needs your vote to continue to the next level. Please take a minute right now to call 1-866-439-5705. This is her number and it does not cost you a dime, but could make all the difference in the world in her life. I may be biased, but I think she is terrific. She comes from a good family and could really use your vote. Once again, the number is 1-866-436-5705 or text "vote" to 5705. Jim Frishe

Sink fights back against McCollum

This spot by the Florida Democratic party begins airing tomorrow in several Florida markets, including Tampa Bay. It's said to be a six figure buy.

As you may be aware, I recently announced that I would be stepping down effective February 20 as Chairman of the Republican Party of Florida.  This decision, although difficult, was made in an effort to unify our Party and in hopes of getting Florida Republicans focused on electing Republicans to office this coming November, which must always be our primary objective. It is has been a great privilege to not only serve as Florida's Chairman, but also as a member of the RNC. I have enjoyed working with many of you, especially Paul Senft, Florida's National Committeeman, and I was humbled and honored to be elected Chairman of the Standing Committee on Rules and I wish my successor the very best.

I would also like to take this opportunity to convey my thoughts regarding the future of our Party, and in particular, current issues involving the RNC and our leadership. The Republican Party has great opportunities before it and our Party's belief in less government, less taxes and self responsibility is one in which Americans are once again embracing which can lead the GOP to many victories this November. But we must also be a Party that is inclusive and committed to providing solutions to the challenges that American's are facing, which, as we all know, is the economy and jobs. For our Party to be successful, we must reject those who promote division, personal attacks and the constant drum beat of Moderates vs. Conservatives. We must talk about the issues and policies and not individuals.  We must recognize that the opposition is not within our own Party, but the Democrats and their policies.  We must also do all we can to make African Americans and Hispanics feel welcome in the Republican Party. With this in mind, I encourage the RNC to oppose any attempt to create a "purity test", to do so would slam the door in the face of Independents and all voters that may be considering to join or coming back to the Republican Party.

Finally, I wish to commend Chairman Steele on his leadership and thank him for allowing me to serve as a member of his leadership team. I look forward to celebrating Republican victories with all Republican's this coming November.

Posted by Beth Reinhard at 2:57 PM in Television | Permalink | Comments