When Brian Breslin founded Refresh Miami in 2006, his monthly meetup would be five people at a Starbucks. Last night, it was standing room only -- about 300 people -- at University of Miami's Storer Auditorium for its monthly event, themed "Founder Matchmaking: Finding your Tech/Biz Partner." 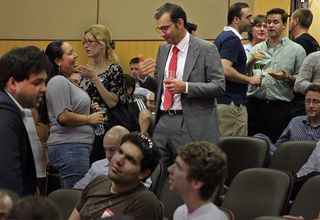 It was the highest attendance ever for a regular monthly meeting, which was co-hosted by the UM MBA Entrepreneurship Club. Breslin attributes that partly to the recent momentum the tech community has been experiencing and partiy to the beer, wine and Misha's cupcakes. But whatever the reason, the topic was a magnet: There were a lot of people starting companies and hoping to meet potential team members, as well as many others looking to  join someone else's venture. "People have been toying with their (business) idea for a long time and are frustrated. They don't know how to get started," says Breslin. 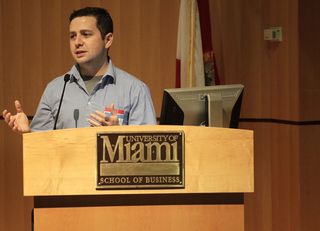 At last night's matchmaking event, there was a panel discusson with two from the technical side (Ed Toro of Inversiones.com and Charles Irizari of Rokk3r Labs) and two from the investment side  (Steve Repetti of RadWeb Technologies and RadWeb Technology Partners and Dr. Stewart Davis of multiple health and medical device companies), who were peppered with questions about red flags when looking for a startup "spouse," what an investor wants in a business plan and presentation, outsourcing versus bringing in a technical co-founder, what qualities one needs to succeed and more. But most of the action happened before and after the panel discussion -- in the auditorium's reception area, startups were on the prowl, with a lot of cards exchanged and phone bumping going on.  By the looks of it, some left with potential partners.

Regular meetups like Refresh fill a need, providing meeting places in South Florida, Breslin notes. Now there are dozens of groups, with more forming every month. In 2010, when he started offering a comprehensive listing of tech meetups and events in South Florida called miamitechevents.com, there were four to five events a month. Last month, there were 82.

Still, what South Florida lacks is gathering spots like Coupa Cafe in Palo Alto, Breslin says, where you can go any time of the day and meet other entrepreneurs, techies and investors. In time, perhaps South Florida will sprout several of its own versions of Coupa. To that end Breslin recently started offering "open office hours" at the Bookstore in the Grove, where those who sign up get a 1/2 hour of his undivided attention for business discussion and feedback. Repetti said he offers "Godfather hours" for that purpose.

Or maybe South Florida already has some favorite gathering spots in the making. Tell us. With South Florida so spread out, we will need several. What do you think should be our Coupas?