On one side: Juan Pablo Cappello, lawyer, serial entrepreneur and serial investor in tech startups. On the other side: Auston Bunsen, young entrepreneur, programmer and organizer of the annual SuperConf. 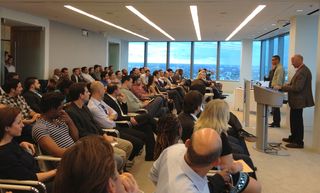 The motion for debate: Miami is rapidly becoming a tech hub and doesn’t need to be a gateway for Latin America to succeed. Read their original viewpoints, where Juan Pablo Cappello argued  Miami needs a major public-private leadership effort to build a tech hub and put forth a five-part plan to do that and Auston Bunsen debated it, first aired on this blog.

They met and agreed to debate the issue this week in front about 100 or so guests that represented a cross section of Miami’s tech community –- startups, investors, university representatives, service providers among them -- in Greenberg Traurig’s large meeting room. UM Launch Pad’s leader, Susan Amat, moderated the debate. 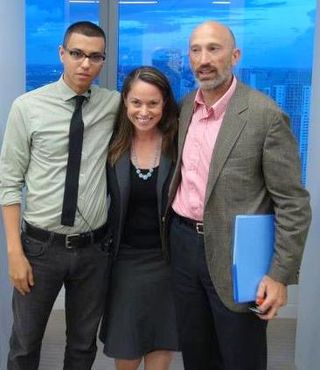 Auston, defending the motion, cited how meetup attendance has skyrocketed, how software company investment has grown, and the fact that GitHub brought its developer conference here and Tech Stars is looking to Miami to source its prestigious programs. While Juan Pablo talked about the late ‘90s when Silicon Beach was in full swing largely powered by Latin American Internet companies, Auston asked, where are those entrepreneurial leaders now?

“We don’t need South America to succeed. We’re at the beginning of our own path to success,” Auston said, citing examples of committed local leaders, investment groups forming, the growing number of coworking spaces and incubators and local successes like CareCloud. He argued that we will get a bigger ROI focusing on our own area rather than importing companies from Latin America.  But he also said there is a lot more work to do. The area needs more web developers and computer scientists with particular skill sets, for instance.

“We need to double down on our efforts and connect with the people and companies here in our own backyard and other people will follow given our own success. Ultimately, I speak for myself and my peers when I say, we will support any endeavor to grow the community here,” he added.

Juan Pablo agreed there are great things happening here, but “the reality is when you look at Miami from the national level, Miami is not on the map.” Of the 150 largest VC firms, not one has an office here, he said. When you google lists of great cities for tech, Miami does not come up.

He also said Miami should take a page from the playbook of Boulder, Austin and New York, which recently developed tech hubs built around niches. Those cities succeeded by developing a brand first, becoming known for something and growing from there, he said.

“The reason I argue the gateway city brand is it’s the one that makes sense, it has already happened, ... We’re a gateway city to over a 100 multinationals that have corporate headquarters for Latin America here,” he said, also citing local Latin demographics. “So my view is Miami has a tremendous opportunity, a large natural advantage as the gateway city… We need to decide collectively on a brand for this locality and push it  out to the world. Once we do that, with all the advantages Miami has to offer,  we are going to have no problem bringing experienced talent from elsewhere here.”

Each also offered a call to action. Juan Pablo’s call: “A lot of the people doing good things down here aren’t collaborating. What we have to do is… get through these issues and concerns that are dividing us, and get rowing  in the same direction.”

Auston agreed with that and added: “My call to action would be to focus efforts in a small geographic area –- literally a square mile or five square miles. There are too many pockets which leads to disparate communities. We will be better served if everything was centralized.  A hub will serve us all very well.”

Also as part of the event, representatives from Knight Foundation, Refresh Miami, Incubate Miami,  Startup Florida, Hack Day Foundation, AVCC, CVOX/Geeky Beach, Straat Investments, Launch Pad and yours truly from the Miami Herald all gave short talks about what they have been doing to support entrepreneurs. Most of them also sent this message: Let’s work together, people!

Then a vote of the audience was taken to determine a “winner” of the debate as well as get a pulse on how many minds may have been swayed. The voting was about even -- and few people admitted to being swayed.

That bothered Auston. “The fact that there was only one person swayed scares me. It tells me people  -- including my friends, who are awesome -- value loyalty over open-mindedness. The vote was the same before and after, absent one independent thinker -- who I applaud. It makes it clear that it's going to be a lot harder than I originally thought to make progress as a region and I hope I am wrong. With that said, I am very happy with the turnout and I am very thankful for everyone's support.”

My take: It takes more than one event to get people all rowing in the same director, as Juan Pablo put it, particularly here. And perhaps the bigger message of the evening was not the debate itself, but the fact that many people from the community came together who don’t normally do so to talk about moving Miami’s tech community forward. That’s a healthy start.

The morning after, Juan Pablo added: “There are great techies here who are doing interesting things and building great businesses. Lots of talented people would love to live here. We have the luxury of many wealthy potential ‘super angel’ investors who live here. Literally, the world visits Miami every year -- thanks to local tourism. The local tech community, broadly defined, needs to debate the big issues and come up with a game plan -- the way New York City, Austin and Boulder have. Carpe diem.”

What’s your view? Let’s keep the conversation going -- why not share your view on this post? Auston posted his remarks and research after the debate; he also answered some questions he said he wished he was asked -- read them here.  Update: Also, see the comments below for more views, including this post by Brian Breslin. Read a view by Doug Poretz inspired by the original posts, with some interesting comments from Ed Toro and Mike Greenberg.There is also this earlier  view by Carlos Ordonez on a Latin America hub, and there are other views on this blog, including about forming a healthcare hub, here and here. Watch Starting Gate for views, news and tools for entrepreneurs, and tweet me @ndahlberg.