Fashionistas and geeks in stilettos and sneaks packed the snug-but-artsy co-working space called LAB Miami in Wynwood one evening last month, celebrating the launch of SewLove.co, a fashion company co-founded by sisters Sabrina and Silvia Scandar that uses crowdsourcing.

By day, Sabrina is a laptop-toting “LAB rat” herself, who became a member as soon as it opened in June. When it came to finding a venue for her big event of about 100 friends and supporters, the LAB was a natural choice. 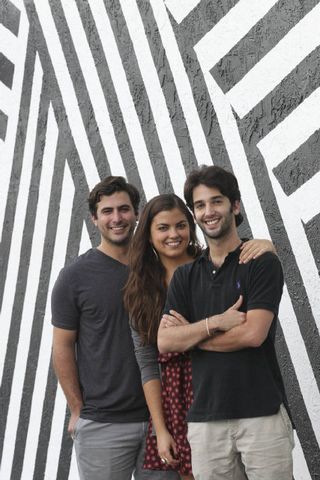 That community center feel is exactly what the LAB co-founders — Wifredo Fernandez, Danny Lafuente and Elisa Rodriguez-Vila — are going for. The trio met at Ransom Everglades, went away to different colleges and made their way back to Miami to start the business.

They want the space to be an inviting gathering place for the creative class, with space for
entrepreneurs of all types to open up their laptops and collaborate by day, and come together for classes, parties and other community events, too. Their space — LAB stands for Love Art Business — has a creative and social entrepreneurial vibe, attracting members in education-focused start-ups, nonprofits, Web design, photography, fashion, film production and improv. “The place needs to breed creativity,” said Lafuente, sitting at the communal work table they built themselves, with local art hanging around the room.

The LAB team, backed by a group of investors, plans to open its 10,000-square-foot space this winter, with event space for meetups, classrooms and phone booths. And it’s not leaving in the neighborhood: “We feel this is the best place in the world to experiment,” said Fernandez.

“Our goal with LAB 2.0 is to truly be a campus for social innovation by providing a robust educational platform, access to mentors and experts, funding opportunities and a collaborative work environment.”

LAB is not the only company bullish on co-working. About a dozen co-working spaces — all with different personalities but all geared largely to the entrepreneur — have either opened in the few months or are in the plans for South Florida, most of them in Miami. They join two of the first to open their doors to entrepreneurs: MiamiShared downtown, which has hosted many tech events over the last two years, and Buro Miami in Midtown.

Most spaces charge around $200 for membership to use communal desks, tables and lounges with full wifi and plenty of amenities, all designed so an entrepreneur can move in immediately without hassles. Most don’t require leases — an attractive feature to bootstrapping start-ups, and will offer a free day to try the space out. All these spaces offer far more than a virtual address. 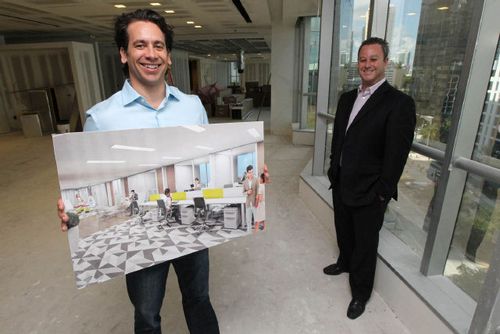 A couple of miles south, for instance, on the 11th block of the glitzy Brickell corridor, workers are in high gear putting finishing touches on Pipeline’s co-working space. Step off the elevator at the 8th floor and look west, and you are greeted with floor-to-ceiling windows offering sweeping views of downtown.

The co-founders of Pipeline Brickell, Philippe Houdard and Todd D. Oretsky, first began talking about their business several years ago but didn’t think the time was right. Now it is, they believe, with both the number of independent workers and interest in entrepreneurship exploding. “Working at home can be an extremely lonely experience. When you step into this place, you do start to build your pipeline, your network.” said Houdard, who previously founded SkyBank Financial and Developing Minds Foundation. “If you are an entrepreneur, it really helps to have the veterans around.”

There are plenty of amenities at Pipeline to draw the veterans as well as start-ups. The 14,000-square-foot space includes 25 private offices of various sizes, generous shared desk spaces, a lounge, a cafe, conference rooms, phone rooms, a kitchen, even a row of swings in front of a “garden wall” to take a break. “There’s a lot you can’t see such as plenty of soundproofing and special lighting. And the A/C — there are no hot spots or cold spots,” adds Oretsky.

Pipeline will seek a curated membership of several hundred people that is a mix of start-ups and professionals. Although the space is not set to open until later this month, the team has been signing people up steadily. Like the others, Pipeline plans to offer entrepreneurship-oriented workshops with speakers and social events like wine tastings, as well as discounts from local vendors.

Membership for shared space at Pipeline starts at $199, and private offices, some with sweeping bay views, start at $849. In between there are options for dedicated desks with lockable storage. Unlike some of the other spaces, Pipeline will be open 24/7.

“One of our most important strategies was to be on Brickell, a professional address in the urban core. We designed it with an eye to the professionals but also to be creative and energetic,” said Oretsky, a serial entrepreneur and lawyer. “We believe professionals and start-ups should come together. This is a way to get people plugged in, to get them to know the community,” he added. More Pipelines are in the plans.

Also betting on the Brickell area: Straat Investments, a holding company for several companies including .CO Internet. It is planning to open a co-working space next year, perhaps as soon as April, says Jose Ignacio Rasco, Straat’s managing director. Straat bought a three-story building on Southwest 8th Street in the West Brickell area and is gutting and renovating the 16,000-square-foot space. Building — that’s the name of it — will be anchored by .CO Internet and other Straat companies, which will take up about a third of the space.

“It will be the new corporate headquarters with a co-working twist,” said Rasco. “We can be a start-up-tech community center, a rallying point for the community, rather than a typical co-working business model.”

Rasco said he looked for the right property and the right deal for two years. “What I loved is it is a warehouse style building and that’s how we are going to build it out.” In the plans — a rooftop garden.

RightSpace2Meet plans to open a 2,500-square-foot co-working space at the University of Miami Life Science & Technology Park in Miami’s Health District this month, joining its two other entrepreneur-focused co-working spaces in Coral Gables and in the Brickell area. The park itself is beginning to gain traction as a hub for tech and biotech — about 200 people attended the weekend-long AT&T Mobile App Hackathon that took place there in August, for instance — and a co-working space was always part of the plans. Just across the lobby from the co-working space, on the ground floor of the complex, is a new Balans restaurant; others are around the corner to keep the young and connected nourished.

The space itself features desks and tables, communal areas, bleacher seating and a treadmill. Monthly membership will start at $200 a month, with day rates available. Annette Reizburg of RightSpace2Meet, which is running the co-working space for the park, said as entrepreneurs outgrow the spaces, the park offers ample office options, including labs for science companies.

The co-working wave isn’t limited to Miami. The entrepreneurs behind the new 11,000-square-foot Caffeine Spaces, next to Florida Atlantic University and complete with a green screen podcast room,
recently launched a crowdfunding campaign on Indiegogo for its furnishings. And while it may seem like a lot of spaces for one region, there are dozens of them in San Francisco, Seattle, New York and Austin, Texas, for instance.

“The catalyst to get the ecosystem to start spinning is more interaction, getting those people to talk, to start working in the same areas, exchanging ideas and thinking of stuff and starting stuff,“ said Juan Diego Calle, founder and CEO of .CO Internet. “We all need to be part of the solution — it is not about creating competition among co-working spaces. There are so many people interested in working together in the same place. That is the essence of it.”

(Photos are by Peter Andrew Bosch of the Miami Herald staff. Top photo is the team of LAB Miami -- from left, Wifredo Fernandez, Elisa Rodriguez-Vila and Danny Lafuente. The second photo is the team behind Pipeline Brickell, Philippe Houdard, holding the rendering, and Todd D. Oretsky.)