It's a wrap: AVCC caps off 1st Innovate MIA week 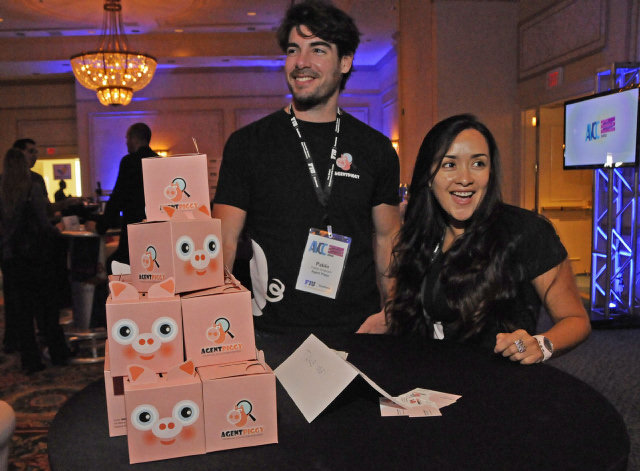 Founders Pablo Ambram and Maritza Lanas of AgentPiggy talk to investors in the "Hot Zone," an online piggy bank that educates kids to make better financial decisions in their lives. AgentPiggy, of Chile, was one of the presenting companies. Photo by Marice Cohn Band of The Miami Herald.

The events, all part of the first  Innovate MIA week, also put the spotlight on Miami as it continues to try to develop into a technology hub for the Americas.

“While I like art, I absolutely love what is happening today... The time has come to become a tech hub in Miami,” said Miami-Dade Mayor Carlos A. Gimenez, who kicked off the venture capital conference on Thursday. He told the audience of 450 investors and entrepreneurs about the county’s $1 million investment in the Launch Pad Tech Accelerator in downtown Miami.

“I have no doubt that this gathering today will produce new ideas and new business ventures that will put our community on a fast track to becoming a center for innovative, tech-driven entrepreneurship,” Gimenez said.

Brad Feld, an early-stage investor and a founder of TechStars, cautioned that won’t happen overnight. Building a startup community can take five, 10, even 15 years, and those leading the effort, who should be entrepreneurs themselves, need to take the long-term view, he told the audience via video. “You can create very powerful entrepreneurial ecosystems in any city... I’ve spent some time in Miami, I think you are off to a great start.”

Throughout the two-day AVCC at the JW Brickell Marriott, as well as the Endeavor and Wayra events, entrepreneurs from around the world pitched their companies, hoping to persuade investors to part with some of their green. 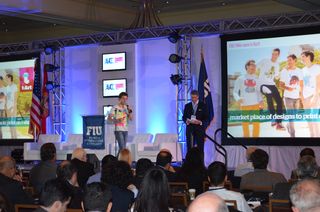 And in some cases, the entrepreneurs could win money, too. During the venture capital conference, 29 companies —including itMD, Kairos, Trapezoid Digital Security, Esenem, LiveNinja, OnTrade, Rokk3r Labs and Zavee from South Florida  — competed for more than $50,000 in cash and prizes through short “elevator’’ pitches. Each took questions from the judges, then demoed their products or services in the conference “Hot Zone,” a room adjoining the ballroom. Some companies like oLyfe of California, a platform to organize what people share online, are hoping to raise funds for expansion into Latin America. Others like Ideame, a trilingual crowdfunding platform, were laser focused on pan-Latin American opportunities. There was plenty of variety among the concepts. Urthecast.com of Canada, for instance, presented a live-streaming solution for scrolling, panning, zooming and searching your way around the Earth.

Winning the grand prize of $15,000 in cash and art was Trapezoid Digital Security of Miami, which provides hardware-based security solutions for enterprise and cloud environments. Fotopigeon of Tampa, a photo-sharing and printing service targeting the military and prison niches, scored two prizes. Read about all the winners here.

The conference offered opportunities to hear formal presentations on current trends — among them the surge of start-ups in Brazil; the importance of mobile technology, big data and design; and overheated company valuations — as well as informal opportunities to connect with fellow entrepreneurs.  Read about AVCC speakers' views on VC and design trends here.

Speakers included Gaston Legorburu of SapientNitro, Albert Santalo of CareCloud and Juan Diego Calle of .Co Internet, all South Florida entrepreneurs. Jerry Haar, executive director of FIU’s Pino Global Entrepreneurship Center, which produced the conference with a host of sponsors, said the organizers worked hard to make the conference relevant to both the local and Latin American audience, with panels on funding and recruiting for startups, for instance. Irma Becerra-Fernandez, FIU's interim VP for Engagement, was given a standing ovation for having the vision to found the conference in 2010. "I know AVCC is making an impact," she said. "This is a very exciting moment for Miami and the Americas."

The conference brought many satellite events as well. The Colombian government, for instance, brought eight of its start-ups to present at a private pitch event on Friday. “If you want to spark innovation, you have to make your entrepreneurs national stars,” said Catalina Ortis Lalinda, who is helping to lead the effort for the government. She said the government also began just two months ago giving about $180,000 to qualifying entrepreneurial teams with operations in Colombia. They have received 350 applications and have already funded 16 ventures, she said.

As usual, Miami worked its natural magic as well, and some entrepreneurs said they were considering relocating their companies or U.S. offices here. Among them was Martin Varsavsky, a well-known European serial entrepreneur and investor and CEO of FON, the largest Wi-Fi network in the world that has not yet entered the U.S. market.

Varsavsky, who left Argentina at 17 and spent time in Madrid, London, New York and now Miami, said he is exploring opening the U.S. office for FON in South Florida and running global functions out of it. “The question is: Can I get the world class team that I need? I think it may be possible.”

Gary Urteaga of Cinepapaya in Peru, a startup for online and mobile sales of movie tickets in emerging markets that presented at AVCC and Wayra, said he’s found leads on clients while at the conference. “We want to move to Miami and work on all these opportunities from here.”

At other events this week:

•  Five finalists from  HackDay, a one-day hackathon that finished Sunday, also took the ballroom stage at the venture conference, ultimately competing for up to a $50,000 cash prize provided by the Knight Foundation and Tres Mares Group. The winning team was asked to continue on to develop the hackathon project into a startup business and would get mentoring and co-working space to do just that. "The idea is to foster the creation of startups here in Miami," said HackDay Foundation founder and Senzari COO Demian Bellumio. 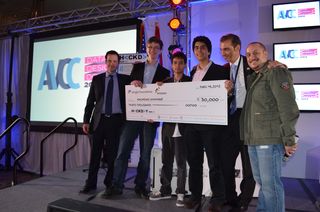 Three teen-agers from Brazil won the grand prize for their app AskMeOut. Will they stay the summer in Miami and build their company here? “One of us is a minor so we have to consult with our parents,” quipped one of them. Stay tuned.

•  Wayra Global, Telefonica Digital’s accelerator, has already invested in more than 170 startups since it launched its first of 12 academies in 11 countries 18 months ago. It showcased 17 of its startups in its first international DemoDay at The LAB Miami co-working center in Wynwood on Wednesday. The event, which attracted more than 200 investors and supporters, will be back, pledged Gonzalo Martín-Villa, CEO of Wayra Global.

The pitch event had a rock star feel at times, with loud musical intros as each entrepreneur ran up on stage and grabbed the mike. But the five-minute presentations were serious and thoughtful.

Among the presenters: Machina of Mexico and its wearable technology; Clear Karma of Germany that empowers consumers to make safer food choices; Bragbet of Ireland with a social gambling solution; and Cognicor of Spain, which provides complaint resolution as a service.

At the event, Martín-Villa also announced that for the first time startups from anywhere in the world could apply for any of the Wayra accelerators. Within 20 minutes of the announcement, 30 projects were submitted.

Each startup team was interviewed by several groups of judges; ultimately, 40 entrepreneurs from 21 teams were selected for extensive mentorship and other support from the nonprofit’s network of 3,500 mentors.

“In Endeavor’s 15-year history, this was our largest International Selection Panel to date,” said Endeavor co-founder and CEO Linda Rottenberg. They join the more than 700 high-impact Endeavor has selected over the years.

Endeavor Entrepreneurs have had a significant track record of creating thousands of jobs and building sustainable growth models in their home countries, she said.

Among those selected this week: salaUno of Mexico, a provider of cataract surgery clinics for low-income citizens; Lomar of Saudi Arabia, which re-imagined the thobe, the robe-like traditional Arab men’s garment, with a fashion forward spin; and Widetech of Colombia, which helps companies manage their logistics operations. 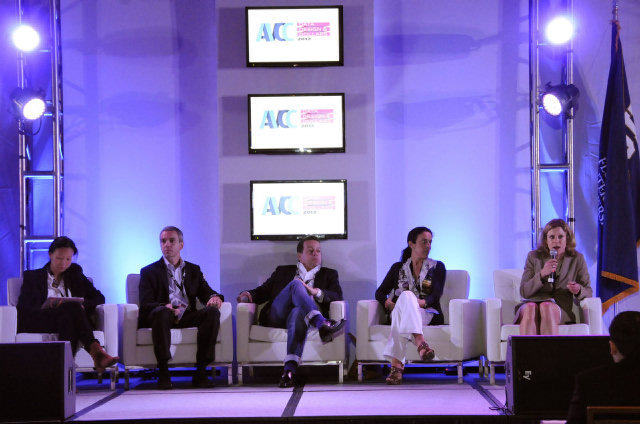 Photos in the middle of the post show t-Art of Argentina making its pitch at AVCC. t-Art is a crowdsourcing platform for t-shirt design and the young Brazilian team from Ask Me Out who won the HackDay competition. Photos provided by CVOX Group.