« ReStockIt.com of Davie purchased by Acme Paper | Main | Take the hassle out of the social media hustle » 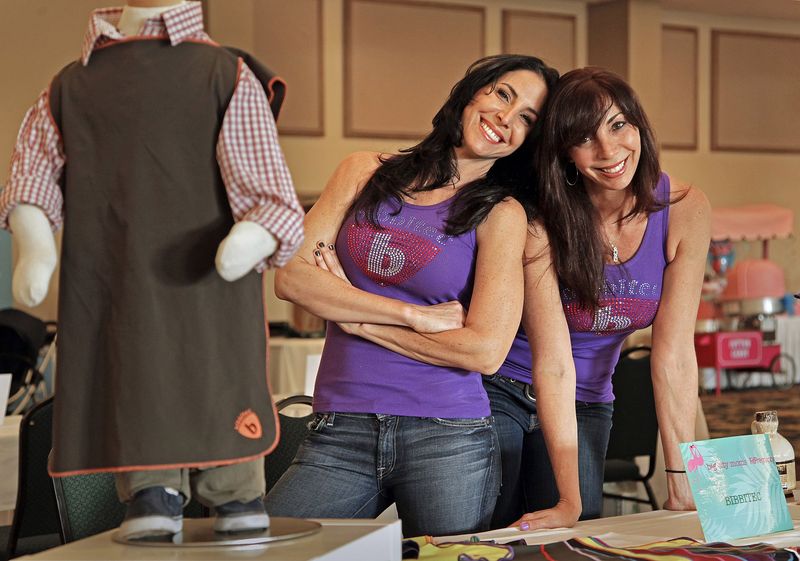 Susie Taylor and her sister, Heather McCabe, exhibit at Big City Moms event at Jungle Island Tuesday. Taylor is CEO of Bibbitec, which makes multi-tasking bibs and smocks for children, and she will be on Shark Tank Friday night. Photo by Carl Juste of the Miami Herald.

Then Susie Taylor included a link to her site, bibbitec.com, and off it went to Shark Tank, the popular ABC television show where entrepreneurs pitch their companies to investors on the show — and by extension 7 million viewers.

Four months later, as the mompreneur was leaving her Biscayne Park home to pick up her kids from school, she got a call from the show asking her to pitch on the spot. Driving with her phone on her shoulder she told the Bibbitec story.

Shark Tank bit. After a few more back and forths, her segment was filmed last summer.

We won’t be getting any details on what happens Friday night when she and her husband, Stephen Taylor, get into the tank with Daymond John, Mark Cuban and the other celebrity sharks; Taylor has been contractually sworn to secrecy. But whatever the outcome, she believes it will be worth it for the marketing pop.

Taylor was inspired to create her bib after a long and very messy plane ride with her two young sons and started her company in 2008. She and her team — her husband is CFO, her sister, Heather McCabe, handles sales and marketing, her uncle, Richard Page, is in charge of production, and her aunt, Marcia Kreitman, advises on design — have expanded the line to include The Ultimate Smock for older children and the Ultimate Mini for babies. Coming soon: a smock for adults.

Taylor already got a taste of what a national TV show appearance can do for sales. In September Bibbitec’s sales jumped 40 percent after she was on an ABC World News "Made in America" segment. “Within 30 seconds we started getting sales from all over the country and they didn’t even mention our name on the air,” Taylor says. She said that confirmed her belief that a Shark Tank appearance would be well worth it.

Plus, Taylor has been hooked on Shark Tank since the first time she watched it in 2008 as she was developing her product. Trained in theater, she admits she didn’t know much about business and learned from the show. She would practice how she would answer the questions.

“I’m all about empowering women who are sitting on the couch watching, because that’s what I was four years ago,” says Taylor. “All I wanted to do was to be on Shark Tank because I believed if I got on Shark Tank the world will see what I am trying to do and that’s all I need. I know it’s a great product.”

Will that theater training come in handy Friday night? Stay tuned. Shark Tank airs at 9 p.m. on ABC and Taylor hopes viewers will join in on Twitter using the hashtag #sharkbib.

UPDATE after show: It was no deal from the Sharks -- the Sharks admired her passion but thought her costs were too high and sales strategy needed work and questioned her price point. But Taylor said Sunday evening she got a flood of orders after the episode -- $21,000 in sales in less than 48 hours -- and contacts from investors. She also said she learned a lot from the experience -- and she still loves the show. Starting Gate will fully debrief her soon.