« Save the date: FIU’s AVCC to be Dec. 11-12 | Main | Healthcare accelerator opens for applications »

The road to .CO: a Colombia-Miami startup story 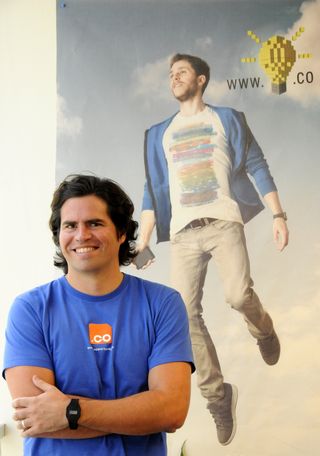 The story of .CO Internet is powered by passion and perseverance –- and yes, the idea was even pitched on a napkin.

Juan Diego Calle, founder and CEO, said it hit him like a lightning bolt when he learned that Colombia would be commercializing the country's .co domain extension.  He believed that those two little letters, .co, would solve a huge problem on the web -– the extremely limited availability of good Internet names -- and he set out to build a team and win the license.

“Juan had the passion -– we had to win this,” recalled Lori Anne Wardi, a .CO VP, during an interview  in the team’s Brickell offices. “This was an opportunity to change the whole Internet.”

That effort is fully in progress. Launched in 2010, .CO Internet already has 1.4 million subscribers; it's one of the fastest-growing domain names on the planet. You can read my company profile here about the company’s early success winning over the hearts and minds of entrepreneurs and its latest initiative, i.go.co, to create a .co online community.

But equally interesting to me is what happened leading up to .CO Internet and its journey in Miami. In a wide-ranging interview, I talked with members of .CO's top management team, who are also investors in startups, about the role of failure, soul, flying pigs and Miami. Here are a few takeaways:

“Don’t get caught up in a bubble”

In 1999, Calle took a year off from UM engineering school, fell in love with the Internet and launched TeRespondo, like an Ask Jeeves for the Latin market. “I got caught up in the bubble -- the idea you could raise a bunch of money and sell it and get rich… It was disastrous because it was building a company without a soul.”

In 2001, with 12-15 employees in Miami Beach, TeRespondo went backrupt. A year or two later they decided to give it another go, but this time without the money or resources. “It forced us to really think about building a product that customers would use and added value on the Internet.  This time we were focused on our customers,” said Calle.

“The learning experiences are priceless. We wouldn’t be here without the lessons from the bubble, the roller-coaster experience of TeRespondo, the day we had to lay everybody off and shut down. When we restarted TeRespondo with real fundamentals and business purpose, it was a much different story.”

“The biggest lesson I learned is that money can be a really bad thing. When you have money you don’t think through things well enough. Without resources we had to really think through our business model. Entrepreneurs think ‘in order to be successful I have to raise money.’ That’s not really true.  Money should be a tool to allow you to scale the business,” Calle said.

On Miami's promise and challenges

“The risks of building a business in Miami are greatly exaggerated,” Calle said during a talk at last month’s Americas Venture Capital Conference. “The fact that now we are talking about [building a tech hub] is incredible.  And we want to be a part of that. We want to be an active part and putting our foot down and saying ‘I am staying.’ ”

[A sign of that: STRAAT Investments, .CO’s parent company, is opening a co-working space in the West Brickell area this summer and .CO Internet and other STRAAT businesses will be anchor tenants. The rest will be for shared work space for entrepreneurs “to bring like-minded people together,” said Jose Rasco, STRAAT's managing director, pictured at left. Read story here.]

Still, Calle said, “Obtaining technical talent has been our biggest challenge. That is an issue.”

In an interview a couple of months earlier, the CO team also talked about the talent challenge and the need for schools to rethink and revamp curriculums. Also mentioned: the need for more local angel fund networks.

“There is magic in the right team. Even if they don’t have the right business model, the right team will keep iterating and figure it out,” said Wardi, pictured here. “That’s why we need active local angel networks, because you can’t just read about it on a website and say 'oh, I am going to invest my money.' You need to know the team really intimately.”

And the .CO team sees promise in Miami as a tech hub. ”Look at the startup scene in New York. In New York it is about companies that connect to industries around it -– banking, fashion, retail, etc. Miami has that -– connections to Latin America, travel industry, hospitality, and so forth,” said. Nicolai Bezsonoff, .CO’s COO, pictured here.

On the entrepreneurial journey

“Every single thing we do, we are making it up. There’s never been another company that has done what we’re doing,” said Wardi. “Every time we start something we have no idea how we are going to do it. We just start calling people, trying things, making mistakes and then something clicks and it works. It is really fun to work with people who let the creative process happen."

And about the flying pigs? You'll have to read the story here.

(Above, In some organic marketing, Sergio Bezsonoff, Nicolai's dad, went on a European sailing trip and his .CO sail raised interest in every port. Photo of Juan Diego Calle at top, as well as the photos of Lori Anne Wardi and Nicolai Bezsonoff, are by the Miami Herald's Marice Cohn Band. )