Can Miami become one of the great cities of innovation?

Richard Florida, an urban-affairs expert and now a South Florida resident much of the year, brought in an all-star lineup of national and local thought leaders Wednesday to explore how to build a robust technology community in Miami — and learn from the experiences of other hubs. 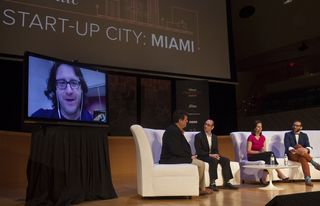 More than 1,100 people registered for Start-Up City: Miami, a free, day-long seminar presented by The Atlantic magazine, Atlantic Cities, and the John S. and James L. Knight Foundation. It was held at the New World Center in Miami Beach, where the main performance hall was full and lobbies were buzzing much of the day. Watch parties took place in Miami and around the country.

“Look at what’s happening in San Francisco, Berlin, Tech City in London, New York. The shift to urban tech is happening. Cities are incubators of innovation,” said Florida, author of The Rise of the Creative Class. “In Miami, we’ve made these investments in arts and culture. Now is the time for the next step.” 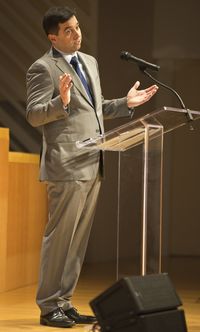 The conference builds on the momentum to accelerate the Miami tech community. The Knight Foundation’s Miami office, led by Matthew Haggman, pictured at left, has already committed several million dollars to projects aimed at fueling entrepreneurship, including bringing in the global nonprofit Endeavor; investing in the co-working campus LAB Miami; and sponsoring dozens of events around town, including Start-Up City. Miami-Dade County and the Miami Downtown Development Authority have invested $1.5 million in Launch Pad Tech, a new downtown accelerator.A wave of co-working spaces catering to entrepreneurs has swept into Miami’s urban core.

“We need to stop thinking of landing an IBM, and instead think about incubating the next group of entrepreneurial startups who will create the technology and solutions of tomorrow,” said Manny Diaz, former mayor of Miami, in his opening remarks.

When it comes to building startup communities, the keynote speaker, Tony Hsieh, the CEO of Zappos.com, knows a thing or two. He has been on a mission to build one in downtown Las Vegas — what he calls the “the anti-strip.” 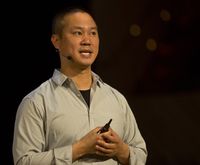 Hsieh, pictured at right, has committed $350 million, mostly his own funds, to help make Las Vegas one of the world’s great cities and a technology hub. For a city almost entirely dependent on tourism, and one that was a poster child for the housing crash, these goals might seem ambitious. Sound familiar?

As part of The Downtown Project, Hsieh is moving his own company — the giant shoe retailer — from the Las Vegas suburbs to the former City Hall. Nearby, he told the crowd, he is also amassing other real estate for co-working and traditional office space, more affordable housing, retail and restaurants — all to ensure an “entrepreneurial energy” and places for “serendipitous collisions.”

Some of the projects in Las Vegas have included a shipping-container park, bike-sharing and car-sharing, 60 furnished apartments for visiting entrepreneurs, and an “Inspire Theater” that hosts thought-provoking speakers throughout the day.

Hsieh has also established a $50 million fund to help tech startups — just two years ago there was no startup scene in Las Vegas, he said. He’s also investing in the arts and small business.

For Hsieh, the goal is to create entrepreneurial density for the resulting “collisions’’— serendipitous meetings. “We want to open-source what has worked and what hasn’t. Just think, we are doing this in this place where you would least expect it.” 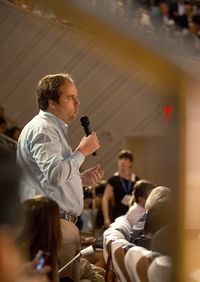 Throughout the day, other entrepreneurs talked about building thriving startup communities in their cities — Boulder, New York, and London among them. And local and national leaders discussed what might work in South Florida and took questions from the audience. “It’s about economic gardening,” said Neil Kleiman, director of Wagner Innovation Labs at New York University. “How do you capitalize on what you have here? How can tech be applied to the industries you are strong in?”

Speakers agreed that Miami has many of the ingredients needed for a dynamic “startup city”: a vibrant urban corridor from Brickell to Midtown, new accelerators and co-working spaces, the lifestyle benefits that come with living in the sun and fun, and as, a result of the housing crash, areas with affordable housing. The region’s role as the gateway to Latin America should be celebrated, the panelists said.

“We could be the capital of Latin America” for tech, said Manny Medina, founder of Terremark who spearheaded creation of the Technology Foundation of the Americas to create a major tech conference in Miami. “We have a fantastic opportunity. ... The conditions are ripe.”

He hopes that conference, planned for May 3-7 of 2014, will spark and anchor a vibrant Tech Week that attracts thousands.

Some of the discussion revolved around removing barriers in zoning and improving digital connectivity, the appropriate role of government, and the small steps groups and individuals can take to help.

“All of us need to get together and make this the place for entrepreneurs and investors to meet and make magic happen,” said Adriana Cisneros, vice chairman and director of strategy for the Cisneros Group.

“Florida has more micro-businesses than anywhere in the country. The issue is getting some of those to scale and grow,” said Susan Amat, founder of Launch Pad Tech, which is accelerating its first class of startups now. "We have to think bigger."

Fernando Fabre, president of Endeavor, said that’s the mission of his global nonprofit, which selects high-potential entrepreneurs and helps them scale quickly and create jobs. Endeavor recently announced it will open its first U.S. office in Miami later this year.

Building an entrepreneurial ecosystem doesn’t happen overnight, Steve Case, co-founder of AOL and chairman of the Startup America partnership, reminded the audience. “It takes a concerted effort, it takes a networked effort, it takes collaboration.”

See related post here with more takeaways from the event.

(Photos by Michelle Kaanar, Miami Herald. Top photo shows a panel that included Sam Arvesman of Kauffman Foundation, Adriana Cisneros of Cisneros Group, Eric Toone of Duke University and Brad Feld, author and co-founder of TechStars via Skype, moderated by Alexis Madrigal of The Atlantic. Bottom photo is entrepreneur Adam Boalt asking a question during an interview session with Robin Chase of Buzzcar and Richard Florida.)