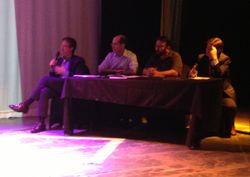 A pair of pitching events on Tuesday gave 13 South Florida startups a chance to pitch their companies before roomfuls of supporters -- and potential investors. The winner: Kairos (pictured here), providing facial recognition technology solutions for the workplace. The prize: an all-expense paid trip to New York to meet with investors. Second place was mxHero, with solutions for email management, and third place was LearnerNation, an education-technology company.

Here is a post from Terrapinn on the event. 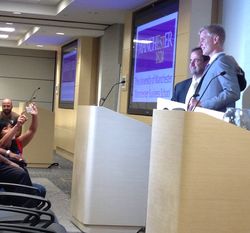 Tuesday evening at the MIT Enterprise Forum's GeekTank, three startups at earlier stages took the stage. Drug Plug, Athletic Select and iFavor were the startups selected to pitch to the packed auditorium at Citrix and each was given 10 minutes to pitch, followed by questioning from the judges. Judges from the Miami Innovation Fund chose iFavor (pictured), a concept for letting club goers decide what music will be played, as the winner. IFavor received a $20K term sheet from Miami Innovation Fund, $5,000 in legal services from the Edwards Wildman law firm, and a year of co-working space from The LAB Miami.

There were some takeaways from both events, which often came out during the questioning and feedback from  the judges.

The team is key. In several cases, the judges admitted they weren't sure about the business idea, but the team was impressive. An A team with a B plan is better than a B team with an A plan.

Remember the audience you are pitching to. Investors want more than just your story and the features of your product.

Give us a demo. Several of the judges in the Terrapinn event said they wished the presenters had included a short demo on how their product works.

Don't forget the fundamentals. What stage are you in? What is your business model? Who is your target market?

Are you raising enough money? Some of the investors were concerned the presenters were underestimating their needs. 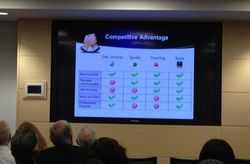 Be able to explain your product or service in a simple way so you don't hear "I don't understand what the heck you do."

Address the competition. Investors will remind you about how many similar plans they have seen -- make sure you can articulate how yours is different and better.

There is no perfect pitch, and you never know what might strike a chord. After the Terrapinn event, I asked five different investors in the audience which of the 10 companies resonated most with them as a potential investment. Every one gave me a different company.