« Civic hacking: Ideas that mine data for Miami's good | Main | A day at HackaNUI -- 'geek heaven' »

Results from Hack For Change -- 'and the winner was ... Miami'

Starting Gate is pleased to present this followup post on the Hack for Change Miami event, which was the subject of Danny's earlier guest post on Starting Gate. 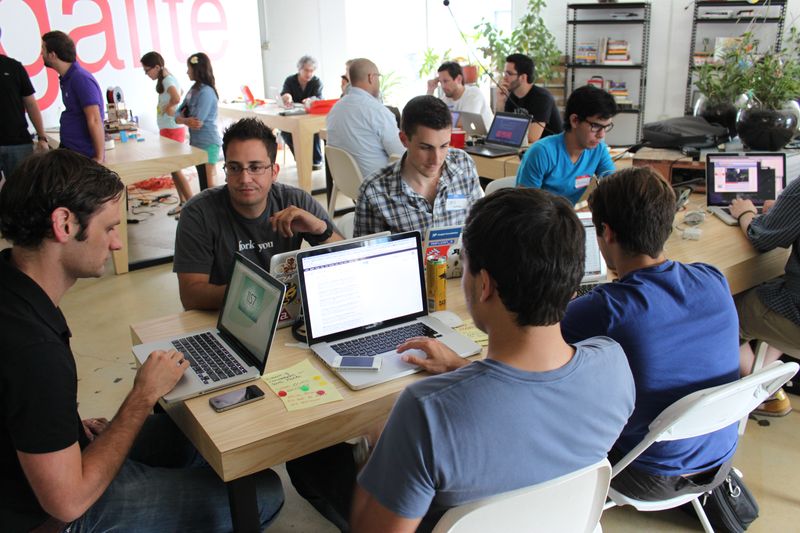 This past weekend, more than 220 people participated in Hack for Change: Miami, which was part of the larger National Day of Civic Hacking. Things kicked off on Saturday with inspiring talks from Matt Haggman, Miami Program Director at the Knight Foundation, and Dr. Richard Bookman of the UM Miller School of Medicine and de facto leader of the Hack for Change steering committee. After a few explanations on some of the challenges issued both locally and nationally, Alberto Cairo, renown data visualist at the UM school of communication, gave a rousing lecture to wrap up talks and kick off the ideation session.

Participants ranging from roughly 8 to 80, and across an incredibly diverse set of disciplines, broke up into groups to identify problems and come up with creative solutions using the available government data sets and open APIs. The exchange of ideas led to an electric atmosphere as teams of people, who started the day as strangers, began forming around some of the more clever solutions. 24 hours, and dozens of energy drinks later, 14 groups presented on Sunday afternoon:

1. MiamiWiki.org – a city-wide wiki to help share more of Miami’s rich history exceeded its goal of doubling the number of entries on the site

2. Magic City Bike Collective – Brian Lemmerman, one of the collective’s members, called for greater access to bike accident information in the city in the hopes of opening dialogue on how to make Miami more bike-friendly

3. Miami SMS - Aleyda Mejias proposed an idea for a SMS-based service, serving smartphone and non-smartphone users alike, that lets you know the next 3 busses coming through a particular stop by texting in the station’s ID 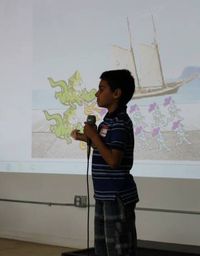 4. Peter Maunder (pictured at right) - Our youngest presenter at 8 years old shared a few animations he built using Scratch, an MIT solution that helps people learn how to code

5. Noreen Timoney - a member of the Miami Women’s Club presented plans on converting the club’s historic downtown location into a state-of-the-art center for civic and technological engagement

6. IsItFlooding? – designed by Ruby on Rails expert Bryce Kerley, this is an app that allows users to see if certain neighborhoods are flooded in order to avoid driving through them by aggregating historic flood zone data and real-time information from the National Weather Service

8. CityHub – designed by Peter, Javier, Gustavo and Roger of the Legal Hackathon Miami’s winning team ‘Pocket Docket’, this is an app that allows users to report the need of certain government services (trash collection, fixing potholes, etc…) but also incentivizes citizens to take action whenever possible

10. IAm1ofUs – designed by Dmitry Chamy, this is an app that asks users to answer some basic  demographic questions and then by usingcensus data and GPS location creates an infographic/visualization of how many people near the user fit the same demographic profile

11. My H2O – designed by Alfonso Guerra, Yair Szarf and Kat Martin, this interactive tool shows where there have been reports of unsanitary water and the effects it could have on your body with the added effect that users can sift through the data using simple hand gestures that are motion-captured by an Xbox Kinnect.

12. MyMiamiSchools.org – designed by Christian Bellina, this app gives parents and students an easier way to see what schools are in which districts and could provide additional information on each such as historic FCAT testing data.

13. FarmMarket – designed by Windows expert Rob Hellestrae, this app allows users to find farmer’s markets, see what is available at each, and provide driving directions using GPS location or zip code and open APIs from the USDA

14. 3D Printed Visualizations – Jerome Maurey-Delaunay of 3D Printing Miami showed renderings of his series of 3D-printed visualizations of census data, of which his rendering of median household income by neighborhood was as beautiful as it was a commentary on income disparity.

For these participants, there was no opportunity for cash prizes or gadgets, but an overwhelming sense of civic pride that came from helping their fellow citizens with a clever app or starting a conversation about how we can improve this city. This weekend, Miami proved it has the kind
of passionate, dedicated citizens it needs to transform itself into a premier hub of innovation. I know I speak for many when I say that this weekend made me proud to be an American AND a Miamian.

So for everyone that couldn’t attend, or thought they couldn’t help, there are still opportunities to participate. Starting June 10, The LAB Miami will host the CodeForAmerica Brigade and Open Hack every Monday night at 7pm to continue supporting the growing segment of civic innovators. Whether you are a programmer or just someone with an idea, I encourage you to come out and see what your fellow citizens are working on. Additionally, in Miami’s fashion of merging arts into other societal sectors, there will be a special exhibition this fall that includes the best local and national submissions to the “Art of Civic Hacking”.

As Miami begins to develop its own technological identity, beyond the simple geographic proximity to Latin America, this weekend demonstrated that the arts along with civic and social innovation would be definitive elements of our ecosystem for decades to come.

Danny Lafuente is the COO and co-founder of The LAB Miami. He is a proud Miami native and alumni of Ransom Everglades School and the University of Pennsylvania. You can email him at 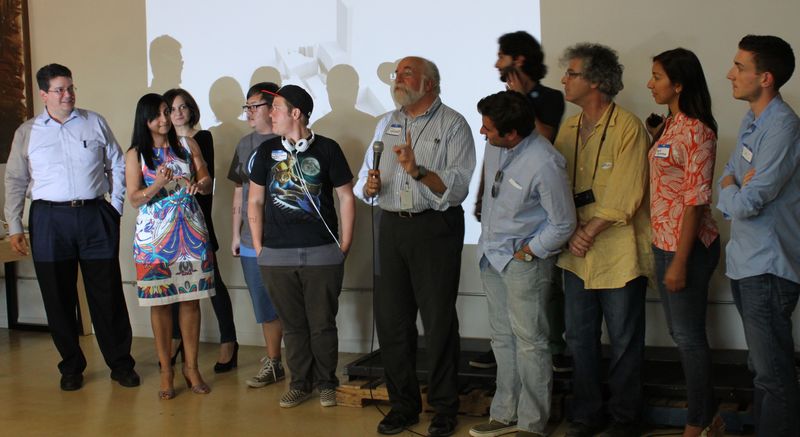 Dr. Richard Bookman, with microphone, and other organizers close the first Hack for Change: Miami event. This photo and the two photos above were provided by pFunk Media.