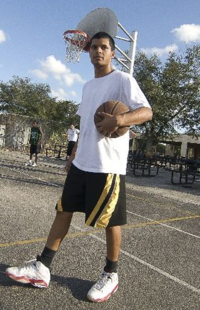 Andres Cardona, CEO and founder of the Elite Basketball Academy in Miami, is representing young entrepreneurs on behalf of  the global non-profit Network for Teaching Entrepreneurship (NFTE) at the Ernst & Young World Entrepreneur Of The Year Award in Monte Carlo June 5-9. Cardona graduated from NFTE South Florida, his local entrepreneurship program, while in high school at John A. Ferguson Senior High in 2010.

Cardona is attending the global event with Amy Rosen, president and CEO of Network for Teaching Entrepreneurship (NFTE) and a recognized expert in comprehensive urban school-system-reform who has worked to close the achievement gap by providing young people with high quality educational opportunities.

“We are proud that Andres Cardona, a local NFTE alum, was chosen to represent our global organization at Ernst & Young World Entrepreneur Of The Year Award,” said Alice Horn, executive director of NFTE South Florida. “Witnessing Andres transform over the past few years from a young kid with no possibilities into a successful entrepreneur and college student full of hope is a testament to NFTE’s entrepreneurship education at work. He will no doubt be an inspiration to other young entrepreneurs while in Monte Carlo.”

Andres was inspired to launch his business when he was only 16 and captain of his high school’s basketball team. He got the idea for the Elite Basketball Academy when his mother lost her job, and Andres felt compelled to help support his family. He began to develop his business idea with the goal of helping other kids who have experienced similar situations. "I wanted to let other kids who've gone through trauma in life to have an outlet for their problems," he said. Students in the Elite Basketball Academy range in age from 8 to 18. The program focuses on teaching the fundamentals of basketball and physical fitness.

Currently Andres, now 20, is a student at Florida International University and is studying finance while continuing to run the academy about which he is so passionate. He has more than 120 students enrolled in his academy and is supporting himself, his education and contributing to his family’s income through his NFTE business. Previously Cardona was honored as a NFTE Global Young Entrepreneur in 2012, featured in Inc.com and on Nightly Business Report that same year.

Ernst & Young supports NFTE by providing a scholarship in each of its 26 US programs and recently extended the scholarship to countries outside the US where NFTE has operations. NFTE is the only global non-profit organization solely focused on bringing entrepreneurship education to low-income youth and impacts the lives of nearly 50,000 young people annually. NFTE South Florida serves more than 3,000 students in Miami-Dade and Broward counties.

About the E&Y World  Entrepreneur of the Year event: In attendance will be 49 country winners representing 47 countries who will be inducted into the World Entrepreneur Of The Year Hall of Fame and vie for the world title. The winner will be announced at a gala on the evening of Saturday June 8. Additionally, guest presentations will be made by renowned speakers as Kofi Annan, former United Nations Secretary-General; Sir Timothy Berners-Lee, inventor of the World Wide Web; Sir Stelios Haji-Ioannou, founder and chairman of the The Stelios Philanthropic Foundation and UK Young Entrepreneur Of The Year 2001; Dambisa Moyo, internationally renowned economist and best-selling author; and Mika Häkkinen, two-time Formula One World Champion. Key themes will include emerging markets, contributions to society, the workplace of the future, cleantech and sustainability, private equity, and family businesses. The World Entrepreneur Of The Year Award will be streamed live from Monte Carlo via webcast. Learn more at www.ey.com/weoy.

Posted by Nancy Dahlberg 06/05/2013 at 09:04 AM in Contests/Honors, Education, Youth Entrepreneurship | Permalink