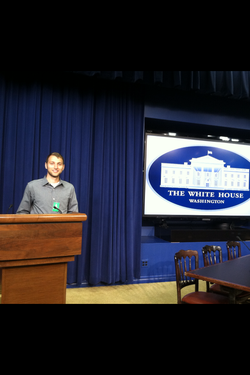 When you speak at the White House at age 22, what do you do for an encore?

On Tuesday, the White House honored 15 leaders from around the country — including Robert Davis of Cooper City — as open government and civic hacking “Champions of Change.” These honorees build high-tech tools to help health and safety workers better serve communities, pilot programs to involve traditionally disengaged communities in local governance, and use new technologies to enhance government transparency, the White House said.

Davis, a recent Nova Southeastern University graduate, is co-founder of RadSocial in Cooper City, a social media consultancy for small businesses, and works part-time at Broward College. But after hours he’s a civic hacker, helping to create tools to mine government data for the public good. He also interned at Code for America in San Francisco last year.

The Code for America internship stoked a passion for civic projects that was already burning since he was in student government at Broward College, he said. When he returned to South Florida after the Code for America internship, he wasn’t sure if he’d find a civic hacking community. But he attended the Knight Foundation’s IdeaJam in the spring, and signed up for the Hack For Change: Miami hackathon at the LAB Miami in June.

For that 24-hour hackathon, he and Cristina Solana, a local developer, created  the Florida Bill Tracker, forked from the MinnPost and redeployed to easily track Florida legislation. Davis had been thinking about developing the bill tracker for a few days before the event — he even found out that the MinnPost’s creation was developed by a fellow Code for America alum — and said he went to the local hackathon wondering if he’d find someone to team with.

“I’m not a developer, I just saw the idea, and when I spoke to Cristina, she was this developer ninja, and said we can do this, we can do that,” said Davis, who met Solana for the first time at the event. “That’s why I like civic hacking — it creates this cross community collaboration.”

After the hackathon, Davis and Solana finished up the Tracker and hope to integrate it with major media platforms, said Solana, who is also passionate about civic hacking.

Davis said he is happy to report that there is a strong civic hacking community growing in Miami. Each Monday night at the LAB Miami, the  Code for Miami Brigade gets together and he attends as often as he can (sometimes using Google Hangout from Cooper City). He’s working on starting a Code for Broward Brigade. Here is a recent blog post from Robert about creating the Florida Bill Tracker at the Hack for Change event at The LAB Miami.

The White House Champions of Change program was created as part of President Obama’s Winning the Future Initiative. Through this program, the White House highlights individuals, businesses, and organizations whose extraordinary stories and accomplishments positively impact our communities. Last year, Susan Amat, founder of Venture Hive and co-founder of The Launch Pad, was named a Champion of Change for outstanding leadership in entrepreneurial mentoring, counseling, and training.

To learn more about the White House Champions of Change program and nominate a Champion, visit http://www.whitehouse.gov/champions