« Why I moved to Miami and you should too | Main | Coding for beginners: Two low-cost or no-cost opportunities next week » 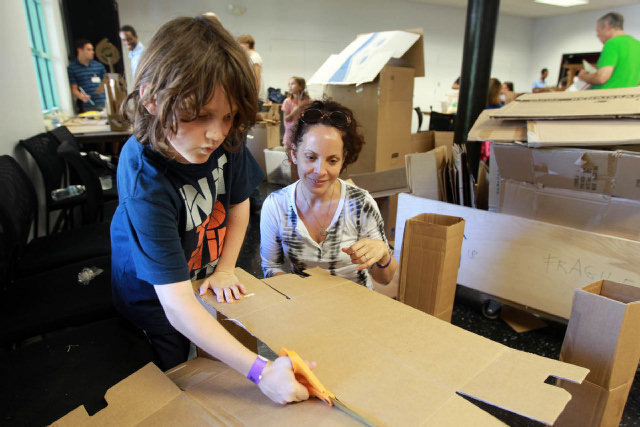 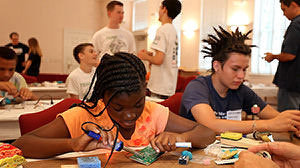 It’s entirely appropriate that  Makers Square is a work in progress.

The grounds surrounding the brick-red building are covered with projects under construction, including large aquaponic planters built from pallets for herbs and fruit trees. Nine shipping containers are being repurposed as classrooms, a pottery studio, a photography studio and rentable individual workspaces. Also in the plans: The roofs of those containers will be covered with gardens.

Inside the building and around the back, there is a woodworking shop, a blacksmith shop, welding areas, an electronics lab, sewing studio, communal meeting spaces, a kitchen and more, all packed with industrial-strength tools of the trades.

Makers Square, tucked inside a neighborhood behind the Home Depot store off Sunrise Boulevard and U.S. 1, is part workspace, part hangout for “makers” or local inventors, tinkerers, techies, entrepreneurs and artisans who get together to make stuff.

“What we found is there a large creative class, but no one knows one another. People are really excited to have a creative hub in Fort Lauderdale,” said Brian Weiner, who opened the space with two partners earlier this month. And more are on the way: A network of warehouse-size spaces for makers is forming from Miami to northern Palm Beach County.

Often combining technology, the creative arts and entrepreneurship, these maker spaces are an outgrowth of a movement that has been spreading around the country and, recently, to South Florida. “Open hack” and “maker nights” are making regular appearances on event calendars. Maker camps, coding dojos and museum events draw tinkerers of all ages. A local filmmaking group from Jump Art Media hopes to make a documentary called  Think Build Believe about the maker movement.

And to showcase all the activity, a  Miami Mini Maker Faire, a one-day extravaganza for all things handmade, is coming to three locations in Wynwood next month. There, about 60 makers will exhibit their creations — including a school bus converted into a micro-theater, a high-tech, high-def pinball machine and, possibly, Weiner’s 16-foot biplane made from bamboo. There also will be presentations, workshops and activities for all ages at the Mini Maker Faire, which is expected to draw about 1,000. “It’s a great place to bring your kids,” said organizer Rick Herrero.

Some maker events and spaces are focused on the tech, where groups of technologists come together to build their projects — from apps to robots to virtual reality games — or to hack away at a civic project, for instance. Other events are focused on industrial projects involving woodworking, metalworking or sewing. Some events are a combination of the two, like the upcoming Mini Maker Faire.

Those in the movement like to point out that that there is nothing new about makers. For centuries, people have been tinkering in their garages, the incubator of many of the world’s greatest inventions. But rather than being solitary, many of them like to create with other like-minded makers. Think your grandmother’s canning parties or that woodworking project that brought out the whole neighborhood of advisers and assistants.

But now, with the tools of tech becoming more accessible and affordable, particularly the 3D printer, the maker movement is moving to a whole new level. It’s now possible to design your project with software and to make a model of it or parts for it with a 3D printer, take the plans into the wood shop, metal shop or sewing shop and bring the idea to life with your own hands.

It took the Makers Square partners three years to find their 14,000-square-foot indoor/outdoor warehouse space. “The landlords don’t get it, a space for building things and not selling,” said John McNulty, who co-founded the space with Weiner and Elaine Scantlen. But he believes five years from now places like theirs will be common.

“People will come there with an idea and want to get it fabricated. It’s like a talent shop for innovation,” said McNulty, who has found that men have been more interested in 3D printing projects while women have been more drawn to welding and carpentry. “This is an idea factory.”

Whether it’s students, young professionals, the underemployed with time on their hands or retirees, the maker movement brings out the teacher in everyone, said McNulty, a former IT director who opens the space to community groups. He encourages members, who pay $25 or $100 a month, depending on the level of membership, to teach classes at Makers Square. “I tell people if they aren’t comfortable with someone looking over their shoulder, this space isn’t for them.”

Up the highway in Boynton Beach is  HackLab. As the name implies, the nonprofit HackLab is focused on tech projects. It’s a 3,700-square-foot space opening in January, but it already has held events.

“We were looking for office space for our software company, and thought being the super-geeks we are what we’d really love is a maker space. Then we thought it’s just what this community needs, and we bought a warehouse,” said Scott Conley, founder of Flipstone Technology Partners, the software company behind this maker space, which received some city and county support. “We’re in this for the knock-on effect. We want someone who is currently shopping their startup to know they are welcome here.”

HackLab will have all the high-end tools of tech  plus a small woodworking shop. Conley says HackLab hopes to offer free memberships to kids. There will be structured classes too, he said, but “you don’t tinker at a class, it’s a way of life. What we need to provide is access.”

In Boca Raton, Caffeine Spaces, a co-working center, installed a maker lab, and the organizers are looking for a larger space in the area, said Matt Trask, a software engineer. For now, Friday nights are “Geeks Night Out” at Caffeine Spaces, where makers spread out their projects on tables throughout the center. Although advertised as running from 6 to 9 p.m., in reality Geeks Night Out often goes from 5 p.m. to 2 a.m., he said.

In Miami, Karja Hansen and her partners run  MakeShop Miami, and have been looking for a 6,000-square-foot or larger space since they moved out of their Little Havana location earlier this year. They are temporarily housed at The LAB Miami in Wynwood, where they had been holding “Creative Fridays” for open-make nights (a play on open mic nights), book talks and lectures. Now they are taking the events around town, “pop-up” style.

Hansen’s wish list for a maker space includes a woodshop, welding, sewing studio with screen printing, a tech studio, ceramics. “It’s all about leveraging art, education and tech,” says Hansen, who has an urban planning background. She and her partners would even like to have a certified education kitchen and small brewing studio.

Like other leaders in the movement, she sees maker spaces as tremendous community-building assets. “There is so much great stuff going on here, but there is a huge inertia, too. The idea is really to build a community in Miami,” she said.

MakeShop Miami is working with the  Miami Science Museum, which wants to do more maker events for kids, like the “Cardboard Challenge” on a recent Saturday.

For several hours, about 20 youngsters, most 4 to 8 years old, engineered friendly cardboard castles (no moats or dungeons, thank you), a drum set, games, houses, ramps — you name it, all from cardboard and other recycled materials, with the help of their parents, museum staffers and MakeShop volunteers. According to Hansen, this is the ideal age to grab their interest in all things making. Indeed, the young makers were so busy that they pretty much ignored the heaping plates of chicken wings and cookies.

James Herring, exhibits director of the museum, has been attending conventions and meetings with museums around the country about creating maker spaces and events within museum walls, pointing to the Pittsburgh Children’s Museum, Austin Children’s Museum and the Exploratorium in San Francisco as notable examples of forward thinking.

The museum has also recently renovated its Teen Tech Center to include more digital activities involving animation and videos, and will host maker events for teens, including partnering with Florida International University on CoderDojo events for kids.

The Delray Beach Center for the Arts, for instance, hosted a  four-week "maker camp" this summer for kids ranging in age from about 8 to 16, who were introduced to electronics, robotics and 3D printing and took part in activities including building a functioning “banana piana.” Funded in part by Make Magazine, the camp was one of 100 around the world and the only one in the Southeast.

The camp was put on by Irene Revelas and her Startup Delray, an organization that promotes entrepreneurship, and Palm Beach LED, a company that runs maker events and is actively looking for its own maker space in northern Palm Beach County, said Pierre Baillargeon, one of the founders of Palm Beach LED.

Meanwhile, Herrero has been busy rallying the community to participate in the first Miami Mini Maker Faire Nov. 16 at The LAB Miami, The Lightbox at Goldman Warehouse and O Cinema. He and his partners at MIAMade are also trying to bring makers out of the woodwork.

“One of the challenges we’ve faced . . . is reaching craftsmen, artists and engineers from our diverse ethnic populations,” said Herrero. “Haitian urban farmers, Brazilian apparel makers, Mexican mechanical engineers, Cuban inventors — they’re all here . . . but they have yet to coalesce around a maker movement as many other makers have in other major cities around the world.”

Makers who want to exhibit can apply at  makerfairemiami.com through Sunday,  and Herrero hopes hundreds will come out to learn more about the movement. “We want this event to put South Florida on the maker map.”