« What “show me the money” looks like | Main | Entrepreneurship Datebook »

1,700+ turn out for celebration of maker movement, family fun 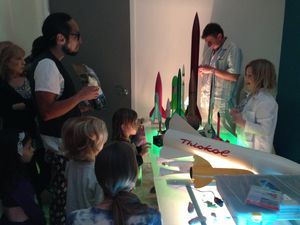 Rocket Rose, aka Rose Eigelberger, was explaining to a group of youngsters how rockets are engineered and how they fly. Rose is only 8. (shown at right)

She’s part of the Jellyfish News, an informal “makers group” formed by three families to come up with creative science projects to do together. David Wald said it all started with jellyfish-raising but quickly escalated to many kinds of projects, like the model rockets that really do fly and others involving computer programming and circuitry.

“For us it’s about the kids, though we have as much fun as they do,” said Wald, who was with his children, Jacob (Make It Jake), 8, and Elisabeth (Light Ump Lizzie), 6. Lizzie was showing off one of her own creations — an LED lighted t-shirt. Don’t worry, parents, the light design is velcroed on and can be safely removed before the t-shirt is washed. 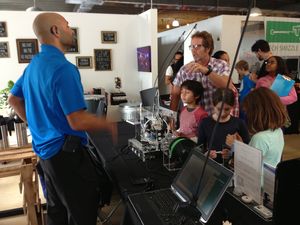 The JellyFish News was just one of the 80 exhibitors on Saturday at Miami’s first Mini Maker Faire, a festival celebrating all things handmade and their “makers” — technologists, entrepreneurs, crafters, inventors and artists. The day-long fair was geared to people of all ages, with many exhibits for kids.

The turnout far exceeded expectations for the fair -- part science and technology exhibition, part crafts show, part carnival. More than 1,700 people packed The LAB Miami, a co-working, education and events space for creatives, and two other nearby venues in Miami’s Wynwood neighborhood. At times, it was hard to maneuver through the crowds, as makers demonstrated 3D printing, virtual reality, soldering, animatronics and robotics, as well as jewelry making, costume design, holiday card making, culinary creations and more.

“If ever there was a question on whether there is a maker movement here, well, look around,” said Ric Herrero (pictured at left), the chief organizer of the Miami Mini Maker Faire, supported by community organizations and maker groups. In South Florida, the maker movement has been growing, with events, clubs and even maker spaces starting to open up, but it is still fragmented. Herrero said at first he wasn’t sure how many exhibitors and fairgoers would turn out.

“The really cool thing about all this is 90 percent of the exhibitors here we didn’t know before,” said Herrero, who runs an organization called MIAMade to foster a maker culture in Miami. “The bet was if we had a Faire, the makers would come out, and they have come out in spades. This is a DIY town.”

Anthony Martelly, 9, could hardly contain his excitement as he and his mom, Amorette Speaks, waited for a demonstration of “Hutch,” Florida International University’s 6-foot tall “telebot,” who gave a show every hour. Steve Luis, a director with FIU’s School of Computing and Information Sciences, said Hutch was developed over the course of about 18 months in the FIU Discovery Lab, which is designed to tap creativity and encourage student innovation. 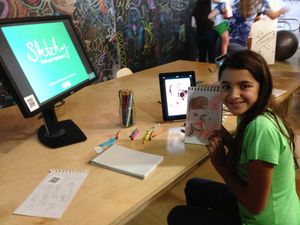 The 3D printers were a hit, too. For Nidia Bejar, 12, (pictured here at the Sktchy exhibit) the entrepreneurial wheels were turning. She thought it would be a good idea for her parents to buy a printer so she could recreate the figures from the popular Minecraft game and sell them to her friends. Minecraft might have something to say about that, but you’ve got to love her ingenuity.

The Sktchy table was also packed. Jordan Melnick is the creator of the popular Sktchy iOS app, where people can submit their photos and artists around the world choose faces they are inspired by and create portraits. At live events, Melnick usually has artists creating portraits, but for this maker faire he let the fairgoers do the drawing because “everyone’s an artist.”

Iris Steele was at the Sktchy table with her kids Santo, 6, and Jaim, 9. She said they had been at the fair for hours but were only on their third exhibit. The kids highly recommended Sktchy, and also the “3-D goggles” (a virtual reality exhibit) and “the Friendly John. We should try to explain that one: That would be Kryogenifex's port-o-potty-like stall tripped out so that when someone emerges from it, a cloud of “smoke” blows out, filling the area. (see video clip)

The Friendly John was outside, along with a grouping of four tire swings that the kids clearly enjoyed riding, as they yelled “faster faster.” Makers Square, a new maker space in Fort Lauderdale, created the carnival-inspired exhibit. (see video clip) 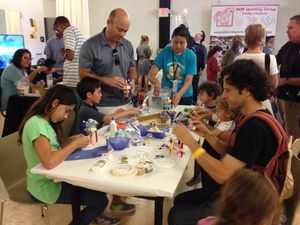 DesignLab Miami is trying to bring back the art of hand and machine sewing, and its table was popular. Dimitry Said Chamy showed off LumaQuilt, a decorative wall paneling made of recycled milk jugs that people can design themselves. Throughout the day, a Mobile Micro Theater, in a bus, showed short performances, such as one using mime. There were documentary screenings, workshops, such as one on hybrid power generation, another one on video game programming and another called “Intro to Ardiuno.” Ardiuno technology was behind much of the animatronics on display. What’s animatronics? Think Disney’s Hall of Presidents.

Perhaps the smash hit of the day was Nelson Milian’s demonstration of Digital Thought’s virtual reality experience. FIU student Alex Del Campillo donned the headgear, took a virtual roller coaster ride and was thrown around in his seat, like on the real thing. He’s tried a lot of VR experiences but this was by far the best, he said. “I think this is the future of virtual reality.”

Indira Schargel, 7, and her friend Mahoro Amani, 7, also gave it two thumbs up. “I was afraid of roller coasters but this made me not feel afraid,” said Indira. “It’s really cool — I wanted my turn to never end,” said Mahoro, who actually did get two turns. 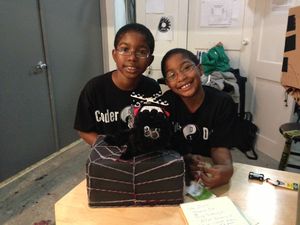 At right, brothers Perry, 8,  and Phillipe Dumery, 10, show off a "Helispider' they made in Coder Dojo in Pembroke Pines, one of two and soon to be three groups for kids FIU's School of Computing and Information Science runs in South Florida. The spider's helicopter is powered by Arduino technology the kids learned to program with.  "The kids learn alot but the intent of Coder Dojo is to have fun -- it's a club," said Steve Luis, a director at FIU. "The kids love this stuff."  Photos and videos by Nancy Dahlberg.

COMING UP: The Hamboree Mini Maker Faire will be held at Tamiami Park on Feb. 1, running in conjunction with the Dade Radio Club of Miami's Hamboree. The show will be offering free admission to students 18 and under and free exhibitor space to Makers wanting to show off what they have created as well as free parking.The show's website: www.hamboreemakerfaire.org