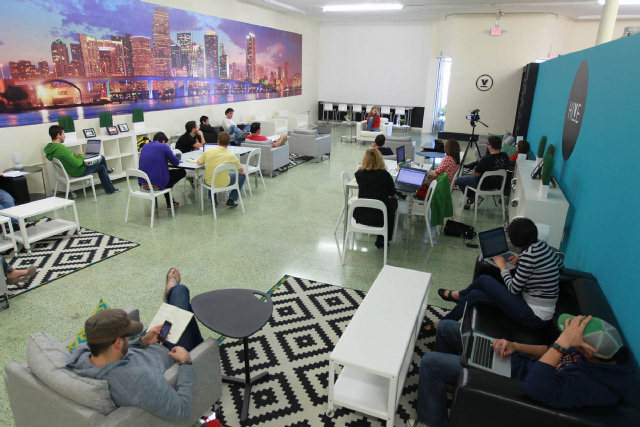 Venture Hive's Living Room is a hub of activity for the 35,000 square foot space that houses an accelerator, incubator and soon a high school program. Photo by Peter Andrew Bosch/Miami Herald.

A big data company focused on the cruise industry. An online food delivery service that includes a search feature based on the consumer’s mood. A virtual check casher targeting unbanked and underbanked U.S. Hispanic consumers.

These companies and seven others are part of Venture Hive’s second accelerator class, and they hail hailing from seven countries including Romania and India. The 10 technology companies announced Monday were selected from a pool of more than 150 applications from 23 countries. Each focuses on one of four industry areas that Miami-Dade County is strong in: tourism/hospitality, healthcare, the creative industries, and a new category this year — trade/logistics. As Like in the inaugural class, half of the companies are from Latin America.

Venture Hive offers a 12-week accelerator program, free office space for a year, and $25,000 grants to the companies it selects. The program, located in a 35,000-square-foot building in downtown Miami, is supported by Miami-Dade Mayor Carlos Gimenez’s office and the Miami Downtown Development Authority. Venture Hive also runs an incubator and other programs.

The 10 tech startups in the new accelerator class will join 21 young technology companies already operating at Venture Hive, some that are part of its incubator and others from the first accelerator class, said Susan Amat, founder of Venture Hive. “The second class will also have the benefit of an incredible international network because of our partnerships with the State Department, World Bank and other international entrepreneurship organizations. Another fun twist is Venture Hive’s new high school program. High school students will be working alongside the startups.” 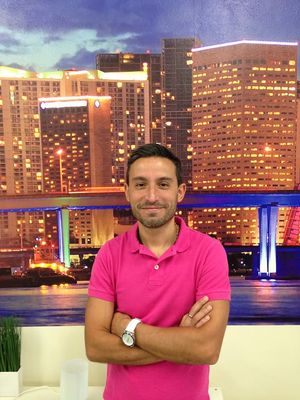 One of the many success stories from the first class is Everypost.  “Everypost is redefining the way social marketers and content professionals manage their content on social media,” said co-founder and CEO Fernando Cuscuela (pictured at right), speaking last week from San Francisco, where he was close to wrapping up a significant fund-raising round.

In the past year through mentoring at the Hive and listening to its users, Everypost has refocused its core business and attracted local investors, including Carlos Garcia of Nobox and Alexandre Hohagen of Facebook. Most of Everypost’s team of eight is in Argentina now, but the company will be expanding in Miami with the new funding, Cuscuela said.

Cuscuela said he will also be spending about a week a month in Silicon Valley for the brand exposure but that Venture Hive is home: “We were a team from another country with a different culture, but Venture Hive welcomed us into their community. They believed in us.”

The next Venture Hive accelerator class starts in January. The 10 startups selected are:

CHANCE: Hailing from Bangalore, India, Chance is a mobile application that allows fans and followers to have short video interactions with their influencers. These interactions are captured and shared across social media. Founding team: Abhijit Gupta, Sandeep Mederametla.

PICK-EAT: Pick-eat is an online food delivery service based in Buenos Aires that includes Foodpad, a new way to search for food based on the consumer’s mood. Founding team: Giuliana Alpern, Daniel Appel, Naor Korona.

Follow Nancy Dahlberg on Twitter @ndahlberg and keep up with entrepreneurship news on the Starting Gate blog on MiamiHerald.com business.