A mobile software maker and a ceviche restaurant group – the two young South Florida companies could not be more different.

But the bets are on that you’ll soon be hearing a lot more about KidoZen and My Ceviche and the founders behind them. They were selected as the first Endeavor entrepreneurs out of Miami.

Endeavor is a global nonprofit that selects, mentors and accelerates high-growth entrepreneurs as a means to significant job creation. In 2012, Endeavor companies worldwide produced about $6 billion in revenues. Now with 871 entrepreneurs from 558 companies and 19 countries, Endeavor offers global mentorship, local advisors and access to resources such as professional services and funding networks to help the companies scale quickly. Endeavor entrepreneurs generally go on to become mentors and investors in their communities.

Endeavor opened the doors in Miami — it’s first U.S. office — in September, with $2 million in support from the John S. and James L. Knight Foundation. “This puts the exclamation point on what has been a remarkable year," said Matt Haggman, Miami program director for the Knight Foundation. "We couldn’t be more thrilled."

After being selected by the new local office headed by Managing Director Laura Maydón, founders of KidoZen and My Ceviche were interviewed and vetted at Endeavor’s three-day International Selection Panel in Dubai last week.

The selection panels, held five or six times a year in different locations, engage business executives, venture capitalists and serial entrepreneurs as judges who determine whether to accept the entrepreneur into the network. The vote must be unanimous. Founders of KidoZen, My Ceviche and 18 other companies from around the world were welcomed into the network.

"It was great to have a tech company and a restaurant company, showing the depth and diversity we have here in South Florida," said Maydón, who will continue to look for more companies that meet the criteria of high-growth, scalable ventures with proven business models and strong leaders. “We welcome self-nominations and referrals on our website [endeavormiami.org].” KidoZen, led by Jesus Rodriguez, is an enterprise mobile platform that gives large companies the back-end structure they need to develop and manage enterprise mobile applications while accelerating the time to market and providing security compliance. Since launching to the public in May, KidoZen has signed up nearly 70 of the world’s largest companies as customers and partners, including the U.S. Army, Royal Dutch Shell, Rio Tinto, Citrix, Tyco and Jetblue. Rodrigues believes Endeavor can especially help his company with its emerging markets strategy.

“We want to build a great company in Miami, so being connected to Endeavor is very important to us. At the same time, we are trying to figure out how we can be helpful to them,” said Rodriguez, a serial entrepreneur who is also a cherished mentor at the Venture Hive accelerator in downtown Miami. 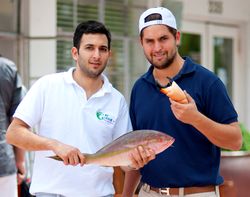 Roger Duarte and Sam Gorenstein teamed up to bootstrap and open the first My Ceviche restaurant in South Beach in 2012, offering a fresh take on fast-casual dining. The business has quickly expanded to a second location, on Brickell, and two more on the runway for early 2014, including one at Miami International Airport.

Duarte, who left the world of high finance in 2008 to open George Stone Crab before My Ceviche, and Gorenstein, a chef at BLT Steak, Michael’s Genuine and other restaurants, take pride in sourcing locally with the freshest products available. They also take pride in creating a Miami brand from scratch and one day giving back.

“We want to grow and we want to do it right and represent Miami in a really good way," said Gorenstein. “It’s the beginning of a new chapter. We know we are carrying a big responsibility."