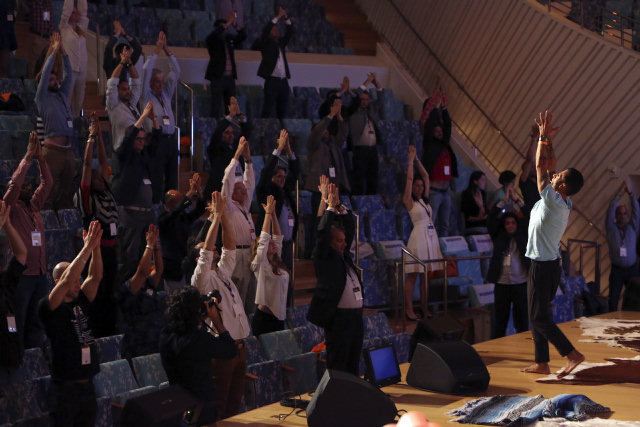 Yoga led by Pablo Lucera at SIME MIA in the New World Center on Miami Beach. Photo by Emily Michot

Driverless cars cruising the mainstream, human genome sequences for a penny, glow in the dark cats — the present and very near future of technology was all the talk at the inaugural SIME MIA conference this week.

Unofficially billed by one tweeter as Basel meets brains, the two-day tech conference that straddled Miami Beach and Wynwood brought together some of the world’s top technologists and futurists to share their views and mingle with South Florida’s growing tech community.

And for Miami, with Art Basel activities in full swing, it was a chance to shine, as most of the nearly 600 attendees — hackers, entrepreneurs, investors and large company “intrapreneurs”  — were from elsewhere: Europe, Latin America, China, New York, Silicon Valley and other places. Some of them admitted to be checking out the Miami tech scene for the first time, with a possible relocation or expansion in mind. And SIME MIA put on a good show.

The multi-sensory conference also featured live musical performances of classical, hip-hop, rock and pop, funny videos, yoga and meditation to clear the mind and a little impromptu salsa dance to lighten the mood. It was clear early on this was not your typical business conference.

The 40 speakers were unconventional, too — there was a filmmaker, a rocker turned venture capitalist and a rapper among others — interspersed with founders or board members of Flickr, Qwiki, Spotify, Fon (see video here), Gigaom, Tapad, Scopely and other well-known names in tech. 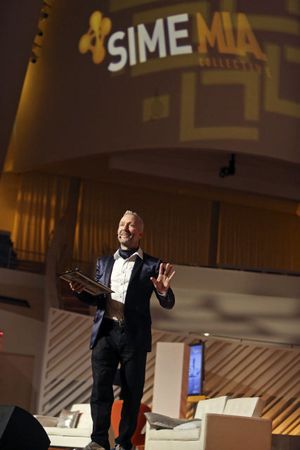 While networking went on in the halls and on the rooftop at New World Center on Miami Beach on Tuesday, SIME founder and host Ola Ahlvarsson (pictured here), a Swedish part-time Miami Beach resident who runs SIME conferences in Stockholm and other European cities, kept the conversations moving on the main hall stage. An underlying theme of the conference was the exponential speed of innovation, inspiring the audience to create and innovate.

Salim Ismael, one of two speakers from the famed Singularity University in Silicon Valley, explained it this way: “If the top speed of a car increased at the same 40 percent desktop computing speed we’ve seen annually, we would have a car that went faster than the speed of light. This gives you some sense of what you have in your pocket.”

He said by the time you finish a master’s degree in biotech, you are already out of date: “It cost $3 billion to sequence the first human genome 12 years ago ... Today it costs $1,000. In two years, it will be down to $100, by the end of the decade it will be a penny. It will be cheaper to sequence a genome than to flush your toilet. ... It may be the fastest moving technology we’ve ever seen.”

There was plenty more food for thought, from 3D printers soon making China’s manufacturing economy obsolete to advances in facial recognition making it impossible to lie, he said. “There are teams of college students that are getting together and hacking DNA in interesting ways, even a glow in the dark cat. The cat’s not very happy about it.”

More predictions from Ismael: Google’s driverless car will be mainstream in three to four years. Within 10 years, technology will replace 80 percent of what doctors do, he said.

“The driving force of all this change will be the entrepreneurs,” said Ismael, noting that the Kauffman Foundation found that since 1980 100 percent of the net new jobs in the U.S. have been created by startups. “Go solve the problem, be crazy.”

Wearable technology, now new and a little awkward, will be huge, with particularly big implications for consumer health, said Paul Walborsky, CEO of Gigaom. It will soon be part of who we are.

The cost of that iPhone we bought is equivalent to the median global annual salary, said Pablos Holman, a hacker, futurist and inventor at Intellectual Ventures Laboratory. Hackers are in the unique position to solve the world’s most pressing problems, particularly in the third world. "Do we make fart apps for the iPhone  ... or do we take on a big problem, a problem that billions of people have?," he asked.

“Almost everything you use in your entire life is through a computer. It makes you question the future of every other industry. As an inventor, I look around where computers haven’t gone yet, figure our what problems need to be solved and go figure out a way to solve them.”

The conference, which was supported by the Knight Foundation, moved to The LAB Miami and the Lightbox in artsy Wynwood on Wednesday, and the conversations turned more specific, looking at the future of artificial intelligence, digital media, digital music and big data. “At Senzari, we do big data in Miami, even though we’re not known for that,” said Demian Bellumio, COO of Senzari, which announced the launch of MusicGraph, a knowledge engine for music. “Hopefully, there will be more and more companies doing some really cool scientific mathematical breakthroughs right from this city,” he said. 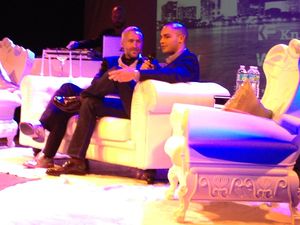 There was also much talk about building and nurturing a tech community in South Florida.

Andres Moreno (pictured with Ola Ahlvarsson on stage) started Open English with $700. Today the online English school, with 2,000 employees, operates all over Latin America, in the U.S. Hispanic community and now is setting its sights on Europe and beyond. The company recently launched in Spain.

Based in Miami, Moreno and his team think it’s a great place to base grow a global business such as his. “What’s exciting in Miami is there aren’t 10 people chasing the same idea yet — you can break out here,” he said. “We’re in the Grove and loving it.” 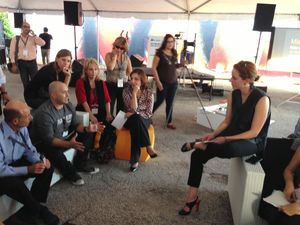 Adriana Cisneros (pictured here at SIME), CEO of the media giant Cisneros, is also firmly planted in Miami. On stage, while talking about her company and the future of media, she offered to help local entrepreneurs. At the next break, Cisneros, who also chairs the entrepreneurship nonprofit Endeavor Miami, was holding court with a group of them. (Oscar Corral captures the moment in a video for the Knight Foundation here)

Perhaps appropriately, art played a starring role at SIME, too. On Tuesday, SIME-goers got to don Google Glass and experience the world premier of David Datuna’s Viewpoint of Billions exhibit, which moves to 97 NE 40th St. in the Design District for public viewing through Sunday. The artist explained that his 12-foot American flag will be experienced differently by every viewer, each of whom unlocks video clips, interactive games and can even opt in to answer questions and become part of the exhibit. And on Wednesday and throughout the whole week, the LAB Miami turned into an art gallery, with 300 Hugh MacLeod cartoons depicting the journey of the entrepreneur. This crowd could relate. After some digital campfires, the event ended with a fun “Miami tech mayor” contest (see video here)  and after-party.

Ahlvarsson and Bellumio, also a founder of SIME MIA, said the first SIME definitely won’t be the last. After the event, Ahlvarsson said he believed Miami would be an ideal location for SIME, but the turnout, energy level, and feedback exceeded his expectations. “The only question is how much bigger and better will it be next year,” Bellumio added.

Read the Knight Foundation's recap of the event here.

See a Storify of SIME MIA here.   And read a related post: Seen and heard at SIME here. David Datuna's Viewpoint of Billions work of art, experienced through Google Glass, attracted a steady stream of tech and enthusiasts at SIME MIA. Above, Alex de Carvalho gets a closer look. Photos by Emily Michot.