« An open letter to the mayor of Miami Beach: You’re wrong and here’s why | Main | Startup Spotlight: MD Clarity »

Message loud and clear: We are one big tech community 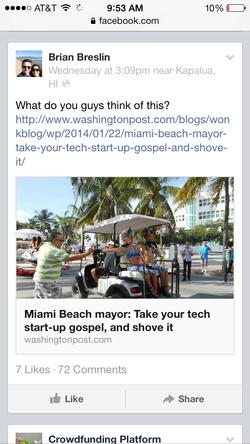 Miami Beach Mayor Philip Levine’s comments, posted on a Washington Post blog this week, that he believed Miami Beach was inappropriate for a tech hub unleashed a flood of passionate response.

In tweets to Facebook comments
to open letters (and invitations) to the mayor, the entrepreneurial community expressed that Miami Beach is an important part of a regional tech hub and challenged the mayor to get to know the them. Weighing in with guest posts on my Starting Gate blog were Refresh Miami’s Brian Breslin, Knight Foundation’s Matt Haggman, Our City Thoughts’ Binsen Gonzalez, LiveNinja founder Will Weinraub and Manny Ruiz of Hispanicize, along with Kairos' Brian Brackeen on WLRN - and they represented the community sentiment well. “I welcome Mayor Levine to join me to learn about the work we’ve been doing over the last decade to turn Miami (the area) into a city we can be proud to bequeath to our children and grandchildren. In fact I invite all of the local political leaders to come together and discuss the things that our burgeoning tech community needs to accelerate its existing growth,” Breslin said in his response titled “Miami is the brand, Miami is the region.”

First on my blog and later on WLRN-Miami Herald Radio’s Florida Roundup, the mayor said his comments were taken

out of context and that he was only talking about the small city of Miami Beach. He expressed that “I may have used a poor choice of words” and that he “learned a lesson” about regionalism -- “I guess being the mayor of Miami Beach I speak for the whole region,” he said on WLRN. He went on to say that Miami Beach could play a role in a regional tech hub through its conferences and angel investment community. To that end, the entrepreneur mayor also invited promising Miami Beach entrepreneurs to pitch their businesses to him because he is an investor.

Still, some in the community worried the Greater Miami tech brand may be tarnished, because outsiders will think tech isn’t welcome here. I believe the South Florida tech community’s response that arose will show outsiders that not only is tech building here, but there are plenty of passionate and motivated champions of the movement.

On the day the blog post was circulating, I also reported that a promising venture-funded startup targeting immigration solutions, Clearpath, was moving to Miami. The team is taking offices at Pipeline Brickell, and will be growing its team of 15 with more developers and business development talent. It’s one of a steady stream of promising young companies making the move. One company at a time, the community is making progress.