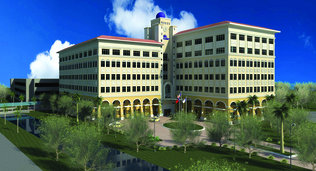 On what is now a parking lot at its main Davie campus, Nova Southeastern University will spend the next two years constructing a six-story state-of-the-art research center — complete with wet labs, a technology incubator, and a new IBM supercomputer nicknamed “Megalodon.”

The ambitious project, at a cost of $80 million, is but the latest example of Nova’s big-time research aspirations: Already recognized as a “high research” college by the Carnegie Foundation, NSU aims to become an even bigger research player within the next five years.

By then, NSU hopes to attain the top-tier “very high research” status enjoyed by a select group of schools — among them the University of Miami.

“This university will be in an elite status of research throughout the nation,” NSU President George Hanbury II told about 250 people gathered for an on-campus groundbreaking ceremony on Thursday.

Once it is completed in 2016, the new NSU Center for Collaborative Research (artist rendering above) will house a wide range of scientists — including researchers from the United States Geological Survey; the Emil Buehler Research Center for Engineering, Science and Mathematics; and the Rumbaugh-Goodwin Institute for Cancer Research.

Appu Rathinavelu, the director of the cancer institute, said researchers there have already obtained three patents for cancer-fighting drugs. In healthcare research overall, Rathinavelu said NSU’s team of scientists has exploded in size — from 10 or 20 people to nearly 100 in less than a decade.

But until now, the cancer institute has functioned off campus at a technology park in Plantation — a location that can make it hard for students to participate if they lack transportation.

With the new facility, “Everybody’s going to be working together, interacting, collaborating,” Rathinavelu said, “This building is going to be a catalyst for all of that.”

Thursday’s ceremony comes as NSU is celebrating its 50th birthday. In that relatively short time frame, NSU has grown to roughly 26,000 students — making it the nation’s ninth-largest private not-for-profit university.

The new research facility’s wet lab space will be among the largest in the state, NSU says. The technology incubator will provide space for startup information security companies, and the IBM supercomputer (named after a prehistoric shark) will let researchers analyze the data from their experiments at much quicker speeds.

Aside from the current project, NSU has taken other steps to bolster its research reputation. About 17 months ago, NSU opened its Center for Excellence for Coral Reef Ecosystems Research at John U. Lloyd Beach State Park in Hollywood. The $50 million building is the largest research center in the country solely devoted to studying how to sustain and protect declining corals reefs.

The university has also partnered with healthcare company HCA on a plan to build a 100-bed hospital at the Davie campus — although that proposal has so far struggled to win approval from state regulators.

Florida universities (and politicians) have repeatedly touted the potential of biotech research to boost the local economy. But statewide, the number of biotech jobs has been slipping, not growing, leading to skepticism over whether South Florida can ever become a regional biotech hub like Boston or San Francisco.

NSU biology major Arti Patel is still a big fan of her school’s growing research footprint. As only a sophomore, Patel has worked with professors on studying the environmental impact on E. coli cells. The goal is figuring out how factors such as pollution might impact and harm human cells — and it’s a learning experience you can’t get from a textbook, she said. In choosing a college, Patel said Nova’s research facilities were a “gigantic” factor.

“It let me know that I had other opportunities outside of the classroom,” Patel said. “That I wasn’t just confined to lecture and lab, lecture and lab.”