Hackathon for Cuba inspires communication innovation -- and the winners are... 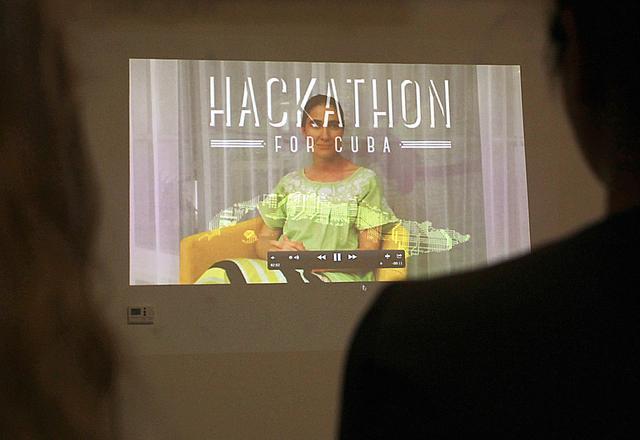 Problems with censorship, extremely costly service and the lowest cellphone and Internet penetration rates in the Western Hemisphere cripple communication in Cuba. Do we think there is an app for that?

At South Florida’s first Hackathon for Cuba on Saturday, there were plenty of ideas for tech solutions to help Cubans disseminate information under the harshest of conditions — and three winners.

Inspired by Cuban blogger Yoani Sanchez’s call to action (pictured above), about 50 computer programmers formed teams and spent the day building solutions and then presented them to the crowd and judges — German Montoya of Rokk3r Labs, Melissa Medina of the Technology Foundation of the Americas, and Jose Rasco of STRAAT Investments — at The LAB Miami coworking campus in Wynwood. The event was produced by the nonprofit Roots of Hope, a network of college students and young professionals that help empower Cuban youth through technology and entrepreneurial support.

Two of the three winning teams — who all received $1,000 in cash — based their solutions on using email to disseminate the information, which obviously seems quite primitive for this group. “You have to challenge yourself to think outside the box,” explained Raul Moas, Roots of Hope’s executive director. “We’re taking a step back in time to move forward.”

For hackathon participants Daniel Arzuaga, Felix Diaz and Salvador Pascual, using email just made sense, as 70 percent of Cubans have access to email but just 3 percent have access to the Internet.

“Our app creates the Internet without the Internet,” said Arzuaga, who moved here from Cuba 14 years ago. He explained  how a person could access marketplace information, such as who is selling iPhones, or a condensed version of a Wikipedia entry, for instance. Diaz and Pascual developed the marketplace application before the hackathon and it is already being gaining traction in Cuba, they said during the presentation; the Wikipedia app was fully created on Saturday. The team plans to continue developing the applications. 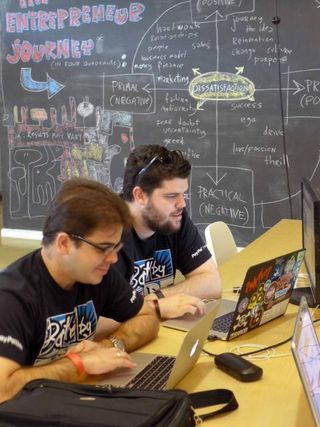 Will they continue developing it? With a good start on the development on Saturday, “we are going to put it on a server and let our [developer] friends in Cuba play with it,” said Pimienta, who moved here from Cuba and 2009. Gonzalez arrived in 2012.

The third winner, Ronny Rodriguez, envisions a $50-$75 kit that would include a mini computer called Raspberry Pi that can store information and essentially create a web access point for sharing the information with others.

“I want to share something with the Cuban people because I know how difficult it is. I was there,” said Rodriguez, who moved from Cuba about five years ago, first to Mexico, where he worked for Citibank, and then to Miami.

There were nine other projects presented, including one for sending Cuban blogs from the inside to the outside world. Other ones addressed maximizing the benefits of expensive Internet cafe sessions or essentially creating the cafe at home. "You are seeing what the potential can be of thinking creatively," said Alex Buznego, who manages digital/social media for the Marlins and was moderating the presentations for Roots of Hope.

The idea of the hackathon was to bring together people who are passionate about helping Cuba with those who live and breathe technology to devise solutions and continue working on them, said Natalia Martinez, chief technology officer for Roots of Hope. A hackathon ground rule: The solutions being developed could not violate U.S. or Cuban laws. One presentation was disqualified because it was based on satellite technology, outlawed in Cuba.

The cash prizes were provided by Roots of Hope, Pop.co, and The LAB Miami and MIA Collective. All winners will also get co-working space at The LAB and one of the winning teams will also receive tickets to MIA Collective events this year, including the next SIME MIA.

The hackathon, sponsored by the Knight Foundation, kicked off Friday night with an opening party attended by more than 100 people. It included a few remarks from Sanchez, via video because she had to leave unexpectedly Friday morning. Sanchez said Cubans desperately need innovative apps to disseminate information. She also said she hopes to soon see the next hackathon — not in Miami but in Cuba.

Typically one- or two-day contests where programmers form teams to build apps and compete for prizes, hackathons are fairly common in South Florida now and are also becoming more specialized. In recent months, events have addressed immigration reform and education. And it’s hackathon high season in South Florida. The PayPal BattleHack is returning to The LAB Miami Feb. 22-23. One winner will be selected to compete in the global finals for a $100,000 prize. Then on March 22-23, again at The LAB, there will be a Music Hack Day to kick off the MIA Music Summit. And in May, eMerge Americas is planning a hackathon.

Roots of Hope also wants to hold Hackathons for Cuba in New York City and San Francisco later this year. 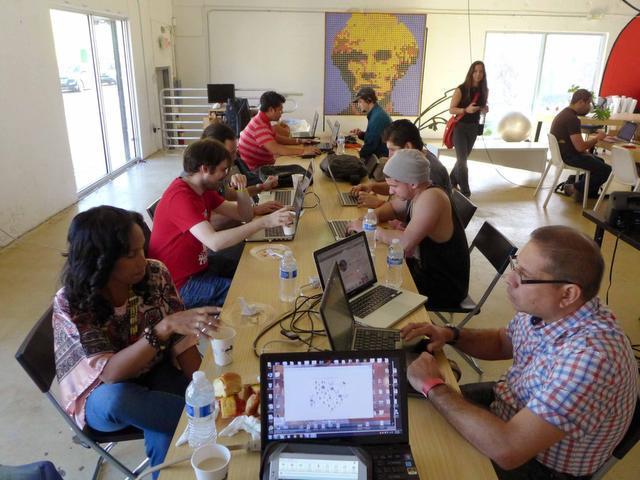 Top photo of Yoani Sanchez is by Pedro Portal and the other two photos are by Roberto Koltun, both of El Nuevo Herald. See many more photos from the hackathon here.