« Entering the Challenge? Sign up for free 'Perfect Your Pitch' webinar | Main | $300K Tap the Future contest open for entries »

All things tech focus of festival at science museum, hackathon for STEM education 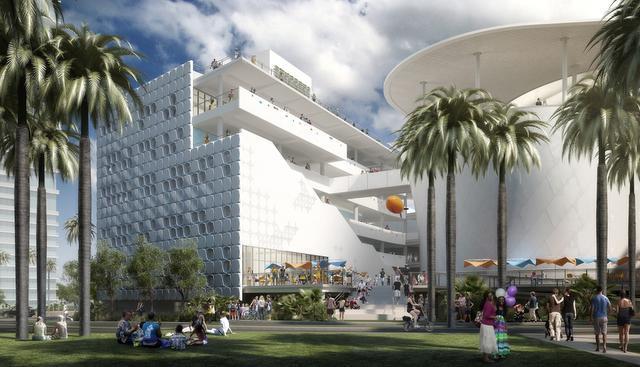 Sneak peek: A rendering shows the new Patricia and Phillip Frost Science Museum, which will open in 2015 near AmericanAirlines Arena.

When Gillian Thomas drives down Biscayne Boulevard, she looks past AmericanAirlines Arena and checks on the progress of the new Patricia and Phillip Frost Museum of Science, set to open in 2015.

“You can see it growing day by day, getting higher and higher,” said Thomas, the museum’s president and chief executive. “We are nearly up to the roof on one of the four buildings.”

The $275 million project will transform the museum into a state-of-the art facility, complete with a planetarium, aquarium and a center dedicated to scientific innovation, including engineering and technology.

To reflect the future, the museum and the Ryder Charitable Foundation are hosting a festival called NEXT: From Nano to Macro, Innovation at Every Scale, taking place next weekend at the science museum’s Coconut Grove location, near Vizcaya. Visitors will learn how technology is rapidly adapting to accommodate society’s demand for the next big thing — from the epic to the tiny nanoscale.

“Having an innovation-focused weekend just made sense,” said Angela Colbert, science curator at the museum. “It would align with the new museum and it is something that we can continue to develop throughout the years.”

Those who attend will notice Tesla Motors electric cars and Ryder trucks parked outside the museum. Ryder, a partner of the museum for more than five years, prides itself on its green engineering.

“Innovation is what works in the real world regardless of what field you’re in,” said Steven Monroe, vice president of Ryder System. “If we don’t change and if we don’t adapt, we won’t grow.”

To help foster this transformation, the museum will have a range of activities focused on innovation. One example: a projection mapping experience, in which people can project items onto a wall and interact with them.

“It’s a really interesting piece that will resonate with people,” Colbert said. “They project things on the walls, and people can actually interact with those projections and change what gets shown based on their movements.”

Eric Schoenborn, creative director of the Miami-based John S. and James L. Knight Foundation, who sees innovation through an artistic lens, will conduct the projections.

“We’re kind of playing in a space that San Francisco or New York can’t claim; this is all new stuff and it requires some technical skills,” Schoenborn said. “But the bottom line is that in order to make it any good, it requires real creativity, which is a piece that I think Miami, more and more, is bringing to innovation.”

NEXT will also include a weekend-long Hackathon Challenge that begins next Friday with a brainstorming session. The Challenge is calling on programmers, graphic designers, business professionals, educators and others who can envision mobile apps for kids. Programmers will build the apps on Saturday at The LAB Miami and return Sunday to the museum to present their apps  for a chance to win prizes -- as well as the hearts of the kids.

“Kids these days are using mobile phones and a lot of that is for gaming,” said Daniel Lafuente, co-founder and chief operating officer at The LAB Miami. “With this particular event, we want to call on these different professionals who understand or envision a game and can come together over the course of a weekend to develop them.”

Lafuente believes South Florida has seen a steady rise in innovation throughout its science and technology fields.

“Instead of being Silicon Valley, Miami needs to be its own technology hub,” said Lafuente. “Once Miami identifies that base, they can absolutely become a major tech hub.’’

What: Next – From Nano to Macro, Innovation at Every Scale

Cost: Event is included with regular admission. Admission price depends on your age and whether you’re a Miami-Dade County resident. Tickets range from $9.30 to $14.95. Museum members are free.

For information on registering for the hackathon:  http://www.eventbrite.com/e/edhack-an-educational-mobile-app-hackathon-tickets-11144396189