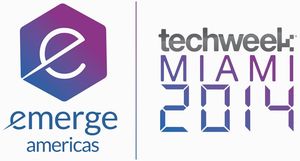 South Florida entrepreneurs, here's an opportunity to compete in a regional pitch competition and possibly win stage time (and cash and prizes) at eMerge Americas.

Semi-finalists from throughout the Americas and representing both early and later stage enterprises will compete and present live at the eMerge Americas Techweek expo May 5-6. Winners in each track, selected by a panel of judges, will be awarded with prizes totaling $150,000 in cash and in-kind services from companies such as Greenberg Traurig and Rackspace.

The Launch will feature the best early- and later-stage companies from throughout the Americas through special partnerships with incubators and accelerators from Latin America, Caribbean and the United States, including Argentina's NXTP Labs, Brazil's 21212, Chile's Startup Chile, Colombia's iNNpulsaand HubBog, Mexico's Angel Ventures, Endeavor Global, and the multi-regional 500 Startups and Wayra, Gonzalez said. In addition, companies from around the world and startups supported by South Florida-based organizations like Venture Hive, Rokk3r Labs, Miami Innovation Center, the Technology Business Incubator at Florida Atlantic University, The Launch Pad at University of Miami, and Refresh Miami will also take part in the competition.

For more information and to apply for the completition, visit http://emergeamericas.org/experience/exhibitions/challenge