Inside view of launch to exit: Mako Surgical 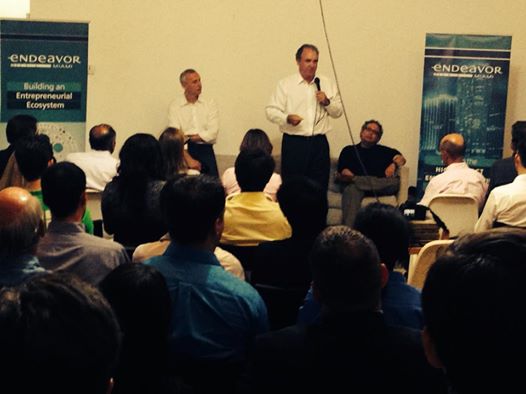 Strap in! The roller-coaster that Mako Surgical’s co-founders rode to incredible success was not for the weak of heart.

There were several “we should have quit” moments for Dr. Maurice R. Ferré and Rony Abovitz, co-founders of Mako, a Davie-based medical device company in robotic-assisted orthopedic surgery and implants. But they raised $350 million in private and public funding, including an IPO in 2008, and grew the company to about 500 employees and $100 million-plus in revenue before Mako was purchased by Stryker Corp. last fall for $1.65 billion.

Ferré and Abovitz spent some time with Miami’s entrepreneurial community at the Brainfood event at The LAB Miami earlier this week. Sponsored by Endeavor Miami, Brainfood is a series that brings in South Florida’s most successful entrepreneurs to share their advice.

For Abovitz, the first “we should have quit” moment came when he and his team of 17 or 18 people were building a company that would be the precursor to Mako. Then Sept. 11 hit. All but one of their investors, some in lower Manhattan, pulled out. The team worked for no salary the next three to four months, driving around the country in a van with their robot. “To survive that period we were forced to take difficult deals,“ he said.

Ferré, who was the CEO, said when he came aboard in 2003, “we were out of money, we had to reinvent outselves,” describing the day he had to split up the company. “Sometimes it was brutal.”

So what were their keys to success?

“You have to have a really good idea. We brought in thought leaders to do due diligence on ourselves. Bring people in who will kick your idea to bits and see if you are still standing,” said Abovitz, who also advised entrepreneurs to read The Art of War — many times.

A big market too. “And don’t go into this unless you are going to be the best in the world. You have to be in that place... We had an underdog attitude,” Abovitz said.

Your story is important too, said Ferré. He said when he was looking for his first funding in California (after finding no takers closer to home) he pitched to the VCs he least cared for first in order to practice and perfect his pitch: “Be vigilant about your story. Be frugal with your money. Set up milestones and show a track record. Find mentors.”

To find talent, they looked worldwide, recruited in the winter and hired a lot of brilliant off-the-radar scientists and technologists. “We built relationships with Harvard, Stanford, MIT. Hire the No. 1 or No. 2 grad student and put the professor on your advisory board,” said Abovitz, who is building a company called Magic Leap in Hollywood.

Wall Street was another wild ride, with 2008 being a challenging time to go public, to put it mildly. Even with the stock bouncing between $10 and $45, somehow you have to tune that out, said Ferré: “The people that matter are your customers.”

Ferré doesn’t question that selling the company was the right thing for shareholders, and he is bullish about the future of robotics in healthcare. “We are in a golden age of opportunity,” said Ferré, who has invested in three robotics startup companies. He also sees enormous opportunity in wearable technology and data mining.