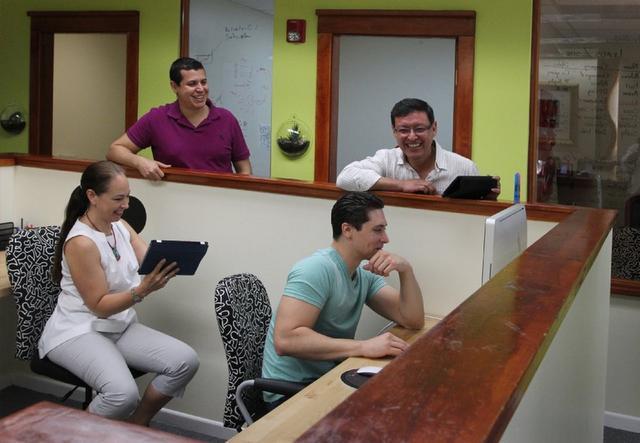 By Joseph A. Mann Jr.

When Lionel Carrasco, a Bolivian-born information-technology professional, got his first iPhone several years ago, he liked how he could access apps — like one for the local weather — just by tapping the screen.

“Why can’t we do this for businesses?” he asked.

This was the seed for the founding of Leapfactor, a Miami-based firm that develops mobile, cloud-based applications for business.

The company, whose name refers to Light Enterprise Access Point, provides apps designed specifically for businesses. Leapfactor “saw a huge opportunity for easy-to-use business apps in the mobile space,” said Carrasco, who has degrees in history and computer science, and has worked in IT for more than 25 years. 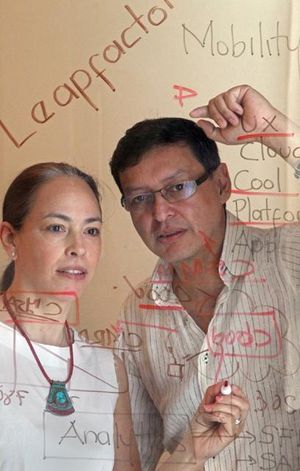 The idea was to develop business apps that function smoothly with virtually any computer system, anywhere, anytime, Carrasco said. Leapfactor apps eliminate the need to make large investments in servers and IT staff to connect computer programs to employees. “We were ahead of the curve in mobility,” he said.

Carrascso, Leapfactor‘s CEO and co-founder, left his job as chief technology officer at Neoris, an international business and consulting firm, and set up Leapfactor in 2009, working with a small group of Latin American friends and colleagues.

“To get started, we used our savings and credit cards,” said Marcela Henao, another Leapfactor co-founder and the company’s chief marketing officer. “We got five people together and began working on a platform for our business.” Henao, an electronics engineer from Colombia, was formerly a vice president for Latin American sales at Verizon subsidiary Terremark in Miami.

After setting up Leapfactor, the founding team began developing a platform for creating apps in Miami, established a cloud at Terremark, and sought additional financing for their startup. By contacting friends and business associates who were interested in innovation, Carrasco raised $2.4 million during the company’s early years. “This funding allowed us to move from PowerPoint presentations on our product to building our platform,” Carrasco said. Since then, it has raised a total of $13 million from private investors and plans to seek additional capital to continue growing.

The company lined up IT specialists and developers in Argentina, which offers a large pool of professional talent at costs lower than those in the United States, to develop apps for different business lines.

Leapfactor chose Miami for its headquarters because of logistics: “It’s one of the most connected cities in the world,” Carrasco said. Florida is a business-friendly state, and Miami is the gateway to Latin America, with top business organizations basing their Latin American headquarters here, he added. “And we can get the best talent from Latin America in Miami.”

Leapfactor promoted its product by visiting chief information officers at different companies and attending IT conferences in the United States and Mexico. The company made its first sale to the insurance group AXA in Mexico in 2010. Since then, Leapfactor has created dozens of apps for companies working in direct sales, retail, employee training, pharmaceuticals and business analytics.

The company now has 50 employees, including 13 in Miami; the rest are developing apps in Argentina, Uruguay and Bolivia. Its clients include Avon, JPMorgan Chase, AstraZeneca, Sherman-Williams, AeroMéxico, Bayer and Limu, a Florida-based company that sells nutritional supplements and weight loss beverages.

Salesfactor is the company’s most popular product. The company developed a basic app that can be tailored to different sales models and content. For example, Avon representatives in Mexico use Leapfactor on their tablets when they visit customers. The program allows them to show the entire line of Avon products, and instantaneously record sales and order products.

“In a digital world where people can control thermostats from their phones, sales reps across industries still live in a pen-and-paper world, carrying heavy brochures and using computer screens designed 20 years ago for desktop browsers,” Carrasco said.

Salesfactor can be adapted to sales reps in any industry. It is able to instantly record sales, process orders and track inventory. At the same time, Carrasco said, at most companies, 80 percent of revenues are generated by 20 percent of the field reps, and managers do not really know what happens during customers’ transactions. With Leapfactor’s business analytics option, managers are aware of what is going on in the field at all times, he said.

Leapfactor is focusing on mobility because its founders saw a rapidly expanding market where millions of sales reps in the United States and Latin America will eventually manage their sales on some type of mobile device.

The tablet market, for example, is projected to grow vigorously over the next several years, “rising from 56 million sold in 2011 to 375 million in 2016,” according to Forrester Research, an independent technology and market research firm based in Cambridge, Mass. This means that “760 million tablets will be in use in 2016, compared with about 2 billion PCs,” Forrester said.

And Gartner Inc., an IT research and advisory company based in Stamford, Conn., predicts that “two-thirds of the mobile workforce will own a smartphone in 2016, and 40 percent of the workforce will be mobile.”

All this represents a big opportunity for Leapfactor, which estimates there are 16 million independent sales representatives in the U.S. direct-sales industry, 3.5 million field reps in business-to-business sales and more than 2 million in-house sales staff.

Leapfactor is not alone in the mobile app business. Its competitors include California-based Veeva Systems and Showpad, a Belgian company that operates in the United States.

Installation time for IT is always an issue for companies acquiring new technology. Leapfactor can install its apps and have its system working in as little as two weeks, Carrasco said. The average time to complete installation for new customers is nine to 12 weeks, he added, but some companies take longer due to the internal review and approval process.

The cost of using Salesfactor varies according to industry size, but average users pay $29.99 per month per user. Large businesses with thousands of users would pay a lower rate.

“When I said we could sell apps for this price, people laughed at us,” Carrasco said.

Leapfactor still is not profitable, Henao noted, but the company expects to become profitable by the second quarter of this year.

One of Leapfactor’s customers, L’Oréal, a French multinational company, uses a customized version of Salesfactor for its SkinCeuticals line of specialized skincare products in the United States, which are sold to dermatologists, plastic surgeons and medical spas. Sales representatives have information about the product line loaded onto the iPads they use when visiting potential clients.

“We’ve been working with Leapfactor for about three years, and all 120 of our SkinCeuticals sales representatives nationwide use their sales platform,” said Matthew Courtney, L’Oréal USA’s IT director. “We use it to promote our products with dermatology offices, and it has worked very well. Leapfactor is easy to work with, and our sales staff like the app.” If customers want to look more closely at some products, the sales rep can email them a PDF file during the visit.

“I assessed several different platforms before I decided on Leapfactor,” Courtney said. “I really liked what I saw with them. The platform has a beautiful design and is chock-full of content, and they got it up and working very quickly. It eliminates paper. . . . Before, we were constantly shipping out new pages to sales staff. We’ve made organizational and cost savings.”