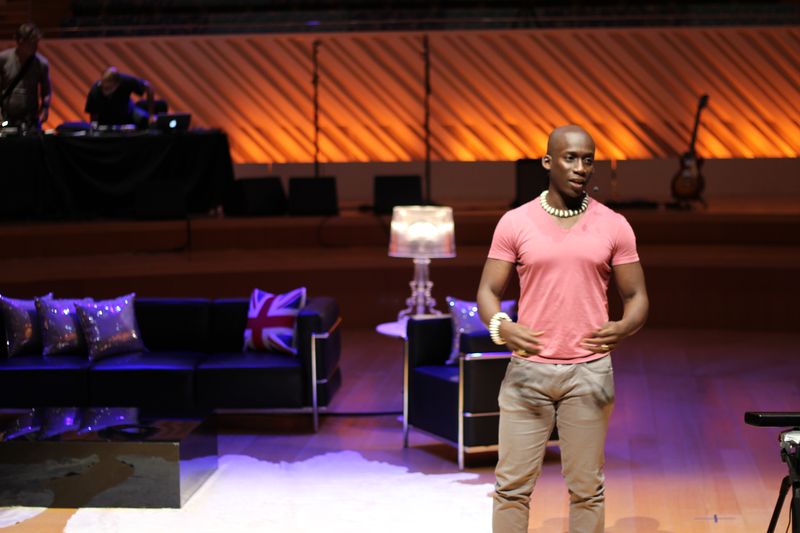 Music, visual arts, film, fashion. With Miami and Miami Beach already a magnet for the creative industries, adding tech should be a natural attraction.

The makings of a vibrant creative-tech hub gained traction last week at the inaugural MIA Music Summit and its accompanying music hackathon. The events attracted about 500 entrepreneurs, music industry executives, investors and service providers. “That was a reinforcement that we were on to something, and it is a foundation to build upon,” said Derrick Ashong (pictured above), who served as master of ceremonies for the summit featuring 40 industry speakers.

Ashong, an anchor at Univision’s Fusion TV network who has a background in both the music industry and technology, rattled off Miami and Miami Beach’s deep or growing roots in all kinds of music from reggae to salsa to rap to electronic dance music. “This is the place for both musical and now technological innovation, and the intersection of those two gives what I see as a significant competitive advantage for this city.”

Neil Crilly of The Recording Academy, which produces the Grammys and Latin Grammys, said locating one of its 12 nationwide offices in Miami was a natural. He also said Miami was in the big four as a record-label office city, along with New York, Los Angeles and Nashville. Indeed all the big names are here, including BMG, Universal Music, Warner Music, Sony, MTV/Viacom, Nickelodeon, SBS, Univision/Fusion and Telemundo; events such as Ultra, the Winter Music Conference and the Latin Grammys; and, of course, the celebrity artists who have homes here.

Zimet and Crilly spoke at a fitting venue for a music-tech summit: New World Center, with 17 miles of fiber optic cable and 14 wall casts a year that are attracting 2,500 people on average.

Already, a number of Miami-based early-stage companies in the music-tech space are making noise. There’s Senzari, which recently released its MusicGraph product that pulls together musical, user and social data for music recommendation; Choose Digital, a digital marketplace for music, movies, TV shows and e-books that can be integrated into brands’ loyalty and incentive programs; AAMPP,  a music social network created around the needs of musicians and their fans. and Kompoz, a platform that allows musicians to collaborate and create songs with other musicians around town or around the world, to name a few.

We even have some big players you may not even think of as music innovators. Take Miami-based global phenom Zumba Fitness. “Its playlist reaches more than 15 million people a week for at least one hour a week. Zumba is creating a new platform for music,” said Scott Chitoff, Zumba’s chief legal officer. The fitness format, and the music that drives it, cuts across all demographics, he said. “Claudia Leitte of Brazil hooked up with Pitbull for a World Cup song and she is going global. How about the 65-year-old in Idaho listening to Don Omar?” Zumba has even put up money for the branding campaigns of emerging artists, he said.

Miami Beach Mayor Philip Levine told the gathering: “We have all the right stuff — tax savings, musicians — the high-tech world has discovered Miami, people are moving here. And tremendous capital — we have the ability to get things done in the music world.”

Said Demian Bellumio, Senzari’s COO who organized the conference with the MIA Collective: “This allowed the conversation to get started. Now it is up to us to make tangible things happen.” He hopes to repeat the conference next year.

Tech is already starting to power other creative industries as well. The LAB Miami, a co-working center in Wynwood, has become a nucleus for creative-industry startups, and last week hosted a meetup for fashion entrepreneurs. The FashInvest Capital Conference chose Miami for its 2014 event on May 14. On Friday, CreativeMornings is featuring Cloak, a social entrepreneurial fashion enterprise.

All this week, the Hispanicize conference at the InterContinental Miami features national speakers, panel discussions and activities in all the creative industries, including music and film-making. The upcoming eMerge Americas Techweek in May will feature an entire track for the entertainment industry, among others. 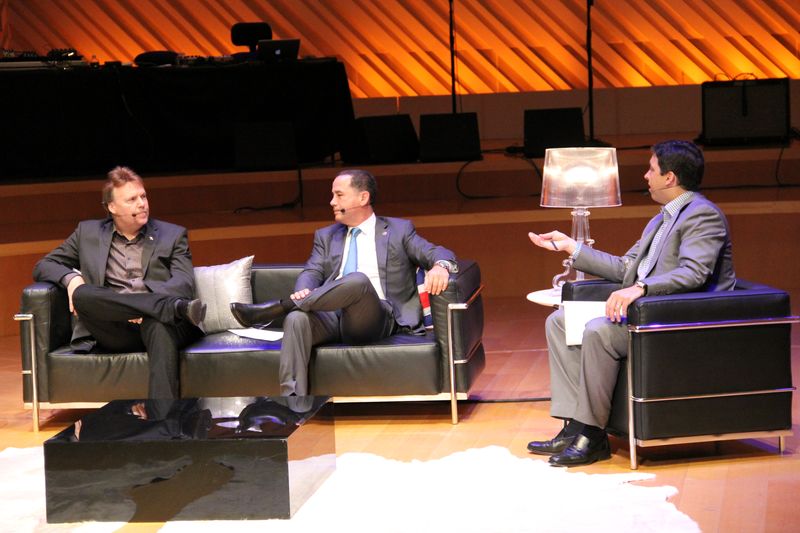 Matt Haggman, right, Miami program director of the Knight Foundation, Miami Beach Mayor Philip Levine, center, and Neil Crilly, who manages the Florida/Puerto Rico region office for The Recording Academy, discuss Miami and Miami Beach as a center for music and technology as part of the MIA Music Summit. Above, Derrick Ashong of Fusion is MC of the event. Both photos by Binsen Gonzalez of Our City Thoughts.