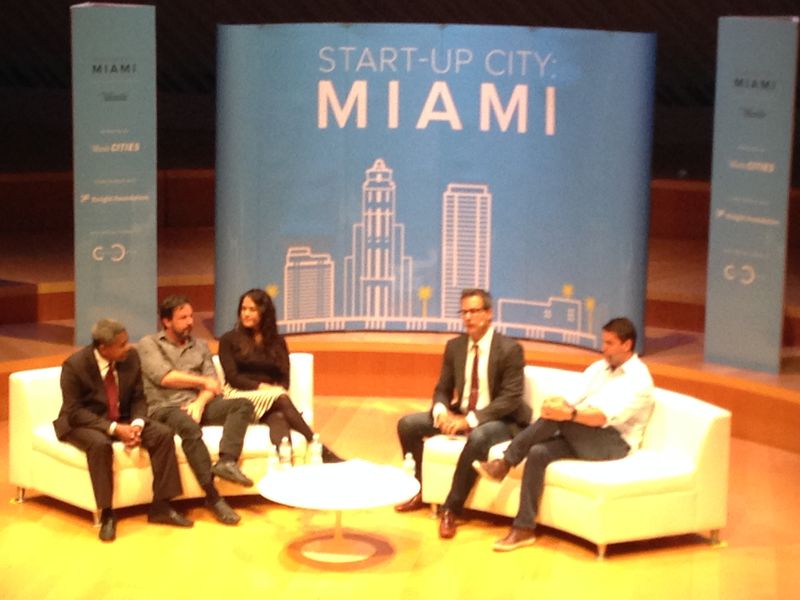 That was the report at Monday’s second annual Start-Up City: Miami organized by The Atlantic magazine’s events division and the John S. and James L. Knight Foundation, as entrepreneurship experts from around the United States and South Florida celebrated successes and focused on the elements needed to further develop a South Florida tech hub and scale and fund local startups.

The Miami area is already the most entrepreneurial area in the nation, according to Kauffman Foundation research discussed at the event. However, nearly all of the region’s small businesses are under 10 employees. The good news, many of the panelists said, is that all the ingredients are here to support and grow an entrepreneurial ecosystem. Through a rapid series of panels and question-and-answer sessions, moderators explored ways to capitalize on South Florida’s unique culture, diversity and position as the Gateway to Latin America.

The event at the New World Center on Miami Beach — presented by The Atlantic and The Atlantic Cities — drew more than 700 attendees who networked with and listened to presentations by out-of-town experts including Michael Jones, co-founder of Google Earth; Sam Altman, president of Y Combinator; Ilan Zechory, founder of Rap Genius; David Porter, founder of 8tracks. Local speakers included Manny Medina, founder of Terremark and the upcoming eMerge Americas, and Maurice Ferre, co-founder of Mako Surgical, which sold last year for $1.65 billion. Many of the day’s discussions were led by The Atlantic’s senior editor, Richard Florida, an urban affairs expert and author of Rise of the Creative Class.

“The data shows that there is a near perfect correlation between urbanization and prosperity. There is also a near perfect correlation between the presence of small firms and the later growth of a region,” said Paul Singh, co-founder of 500 Startups and now founder of Crystal Tech Fund. “Tech companies will never create the majority of jobs, but they will have a disproportionately positive effect on the economy … If Miami finds a way to bring more high growth tech industry here, all the other industries will benefit.”

His call to action for South Florida investors in the audience: Invest half your money with companies here, invest the other half in companies outside the area and bring them here.

Marking the region’s progress was a report released Monday by Florida and his team at the Martin Prosperity Institute at the University of Toronto's Rotman School of Management,  which found that Silicon Valley has been replaced by urban centers as the nexus of venture capital funded high-tech startups.

A companion report showed that South Florida dramatically improved its ability to attract venture capital, raking in more $300 million in 2013, the 16th highest take among the 380-plus U.S. metro regions. Together with Orlando and Tampa, that figure rises to $600 million, Florida said, placing it among the top dozen venture capital regions in the country. Both reports can be found at www.martinprosperity.org.

As a case study, the Start-Up City program pointed to Detroit. Josh Linkner, CEO and managing partner for Detroit Venture Partners, explained how that once-fragmented community has united in its mission to create a tech economy and save the city. Projects pairing foundation seed grants with venture capital have generated a billion dollars in investment in Detroit, said Linkner, who runs a $60 million fund that invests in young tech companies in that city.

“In our case we saw this incredible opportunity. Why go to either coast and be followers in a herd rather than make a big impact in your hometown?” said Linkner, who says he now gets calls all the time from entrepreneurs wanting to move back and investors interested in Detroit companies. “The creative class is returning. The draw is to leave your fingerprints on the city. In Detroit, all of us can be part of the rebirth of the city.”

The program also explored funding, still considered one of South Florida’s chief challenges. But the day brought good news: Will Weinraub, CEO of Miami startup LiveNinja, a platform for buying and selling services, said Monday he has raised an additional $500,000 from local angel investors, bringing total investment to $1<TH>million. Andres Moreno, whose Miami company, Open English, raised $120 million in venture funding, said during a panel that he is starting an online university for Latin America and has already raised his first $2.5 million for the new venture.

“I firmly believe If you have conviction about something, put some money behind it,” said Peter Kellner, co-founder of Endeavor, a global nonprofit that supports high impact entrepreneurship that recently opened in Miami. Kellner is raising money for his new fund, Richmond Global, and said he intends to make sizable growth-stage investments in local ventures. “It will take some time, but Miami has real promise. We need to get some of that capital on the sidelines excited about that.”