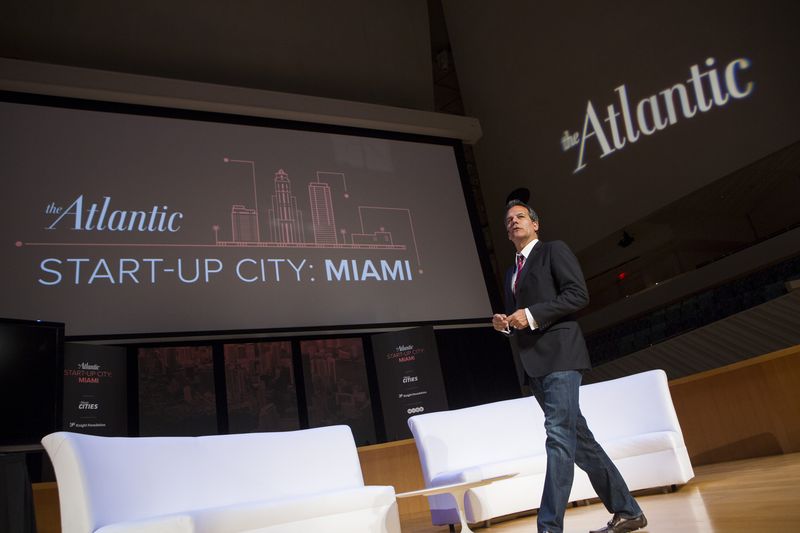 Back for a second year, Start-Up City: Miami, presented by The Atlantic and The Atlantic Cities, will explore the national urban tech revolution and its impact on South Florida.

Held in partnership with the John S. and James L. Knight Foundation, this year's event on Monday, March 31 at the New World Symphony Center will gather leading entrepreneurs and thinkers for a series of conversations on what makes a successful startup—from the importance of scaling and funding, to the best places to incubate talent, to Miami as a hub for the Latin American startup ecosystem. More information and tickets, which cost $75, are available here.

Start-Up City will provide a marker on how things have gone since the last one, and the changes have been dramatic, said Knight’s Miami Program Director Matt Haggman, mentioning Endeavor’s launch, co-working spaces and incubators flourishing, and some remarkable exits, like Mako Surgical’s $1.65 billion exit last year and just last week .CO Internet’s $109 million exit. “This gathering will give us a chance to take stock and assess – and then look forward,” he said.

Looking forward, two areas of focus: funding and talent. “As we are all involved in trying to build this emerging ecosystem, for it to all ultimately work, it all hinges on entrepreneurs finding the funding and talent they need to execute,” Haggman said. There will be a panel discussions on funding and scaling, as well as entrepreneurs like Maurice Ferré of Mako sharing his story.

Like last year’s event, urban studies expert Richard Florida (pictured above), co-founder and editor at large of The Atlantic Cities and senior editor of The Atlantic, will lead the day's discussions. On the day of the event, Florida and the Martin Prosperity Institute at The University of Toronto's Rotman School of Management will release the comprehensive report "Startup City: The Urban Shift in Venture Capital and High Technology" that shows the high-tech startup sector is shifting back to both the urban center and mixed-use, transit-friendly suburbs.

Last year we spoke with Florida, author of Rise of the Creative Class who lives part-time in South Florida, about his views on building a tech hub here, and we decided to find out how he thinks Miami is doing. We also wanted to get the lowdown on Start-Up City (Version 2.0):

Q.  What do you hope to achieve with year 2 of Start-up City: Miami? What are your goals for the conference?

A.     We have two goals. First, we want to help change the narrative for both Miami and Miami Beach. Both have long been seen as places for sun and fun, restaurants and clubbing.  That’s great, and a huge advantage. But the past decade or so has seen the region become a fantastic destination for arts and culture. The whole area is beginning to attract a new generation of talented people in their 30s and 40s, who are far less tethered to their jobs. Digital technology enables them to work from anywhere and they are choosing Miami.  These people don’t just work in tech per se, they work in and are creating a wide range of businesses, many in the health and lifestyle sectors. Miami is really beginning to achieve in the lifestyle space.  We want to help build connective fiber and networks between these people. We also want to help them learn from what’s happening in other places, identify what may be obstacles to the further development of our own start-up community, and focus in on the really great things we can do to move forward. Miami needs to invest in developing and keeping the talent that’s already here, and attracting new talent. It needs to better leverage its ties with Latin America. It needs to become a place where new businesses can scale.

The second thing we want to do is make Miami a place where the best people from around the country and the world can come together to dialogue. Miami is on the arts and culture map but it is far off the ideas map. A great city needs to be an idea capital. That’s why we are working with The Atlantic and Atlantic Live, which run the Aspen Ideas Festival, the Washington and New York Ideas Festivals and City Lab, the major conference for mayors and city builders supported by Michael Bloomberg and the Bloomberg Philanthropies. Personally, I believe Miami’s biggest challenge and opportunity is to become a hub in the development and circulation of ideas. What better place is there for the idea and thought leadership community to come together than Miami and Miami Beach? I find it a great place to develop and work on my own ideas.

Q.    Given what you said last year, where do you see Miami’s urban transformation and startup ecosystem development now?

A.     It’s sort of amazing.  I think it was you who wrote in the Herald, Nancy, about how Miami and South Florida has really upped its game in venture capital. We’ve prepared a little backgrounder on this for the conference, using the same detailed data from Thomson Reuters.  Miami raked in about $300 million in venture capital in 2013.  That’s a huge jump from previous years; it puts Miami 16th among all US metros. No, it’s not yet Silicon Valley. But when we added up all the areas that comprise what I like to call the So-Flo (Southern Florida) Mega-Region, the Miami region plus Greater Orlando and Tampa, the figure shot up to $600 million. That’s about as much as Chicago, and not too far off from a place like Seattle.  Now we’re talking some serious numbers.

What we’re seeing today is venture capital shifting away from the old traditional suburban nerdistans – the office or industrial parks on the side of the highway, whether they’re in Silicon Valley, California or along Route 128 outside of Boston, or suburban Seattle where Microsoft is, or suburban Austin. Now startups are surging back in the urban cores of big cities, in downtown San Francisco and Manhattan, and to a lesser but growing degree, in urban Miami as well.

I’m releasing a report at Start-Up City: Miami 2 called Startup City. My colleagues at the Martin Prosperity Institute at the University of Toronto’s Rotman School of Management and I have been at this for more than a year, parsing very detailed, micro-level data on the locations of venture capital investment and startup activity across the country.

The urban tilt is very real: Venture capital and startup activity is shifting from the suburbs into urban core areas and walkable, mixed used suburbs. The areas in and around downtown San Francisco have emerged as the leading location of venture capital and startup activity in the US, topping Silicon Valley. Lower Manhattan from Chelsea to Tribeca is raking in $2.5 to $3 billion a year. And great walkable suburbs like Palo Alto, California and Cambridge, Massachusetts have really come on strong (both are attracting more than $1 billion).  Suburban locations like Boca Raton still pull in the most venture capital in Greater Miami, but Coconut Grove is a leading area, and places in and around downtown and Brickell are upping their game. Miami Beach has significant venture investment as well.

Why is this happening? Greater Miami has all the urban attributes that are attractive to the creative class, tech investors, and techies themselves: old industrial buildings, dense, walkable neighborhoods, quality of life amenities like beaches, culture, food, music, and especially diversity.  Miami has this in spades especially in and around Wywood, Midtown and the Design Districts where art galleries and the big art collection spaces are.  Already, we are seeing a bunch of startups in and around there and the Knight Foundation has made signature investments in incubator/ accelerator spaces like The LAB Miami and Endeavor Global, the global entrepreneurial assistance organization that has opened its first US branch in Miami.

In other cities, like San Francisco and New York the urban tech explosion has happened in a dramatic and unplanned way, putting tremendous pressure on real estate markets. It’s also produced a significant backlash as housing prices have shot up, changing the character of neighborhoods and squeezing long-time renters. As new as Miami’s tech scene is, we have a rare opportunity to plan for it and optimize it.  I am hopeful we can create a new model of less divisive and more inclusive growth.

Q.    What are some highlights of the upcoming conference?

A.     I’ll be in conversation with Mayor Phil Levine, who is committed to making Miami Beach into a world class city attractive to the creative class and entrepreneurs.  Let me tell you a funny story about Mayor Levine. I read in a blog at The Washington Post how he took to the rostrum and said that turning Miami Beach into a tech hub was "the dumbest idea in the world,” adding that “as much as it sounds great, it’s sexy, that’s not who we are.” I called up Matt Haggman at Knight and I said, let’s go see the mayor. So we did, and we had an amazing two or three hour meeting. I was totally blown away by him. He “gets it.” His point was that Miami Beach is a place built more for lifestyle entrepreneurship while Miami and especially a place like Wynwood, are better suited for tech and related kinds of entrepreneurship. Plus he has so many great ideas to improve Miami Beach’s quality of place, from bike lanes and transit to denser development and parks. We all thought to ourselves, let’s take this conversation out to the public at Startup Miami.

In addition to a panel conversation with tech entrepreneurs, we will also feature Roger Duarte, Co-founder of My Ceviche, and Joel Pollock and Leticia Pollock, Co-founders of Panther Coffee, who will join me for a dialogue about how Miami is attracting and supporting entrepreneurs outside the tech sector and especially within life style and consumer goods sectors.

The day’s activities will also highlight Miami’s connection to the greater Latin America entrepreneurial ecosystem.  Camila Souza of Tech Cocktail, will interview an array of entrepreneurs who have operations both in Miami as well other Latin America locations.  We believe Miami is a top destination for Lain American talent, which provides the city with unique opportunities for economic development that we want to uncover further.

Finally, we’ve also got a list of headlining entrepreneurs who will share their experiences. Michael Jones, Creator of Google Earth and Chief Technology Advocate for Google, will open the conference. It will close with David Porter, founder of 8tracks, discussing the development, launch and scaling of his app.

RELATED: Matt Haggman looks back at progress so far on building an entrepreneurial ecosystem and ahead, reflecting on the outcomes the Knight Foundation hopes to achieve.