The second annual Start-Up City: Miami conference, which took place Monday, March 31 at the New World Center in Miami Beach, showcased a day’s worth of engaging discussions on the strengths and weaknesses of South Florida as a center for entrepreneurship activity.

The many advancements made in the last year to enhance the region’s climate for startup activity were highlighted – including the expansion of local business accelerator programs, the increase in area venture capital investments, and the launch of new programs to support area entrepreneurs.

Yet while Miami has accomplished a lot in a short period of time, we have a ways to go before we can become a truly vibrant “urban tech hub.” How does our community bridge that gap? What lessons can we learn major startup cities? How can entrepreneurs capitalize on today’s macro investing and market trends?

Ideas and advice abounded at Start-Up City: Miami, but here are some of the most notable takeaways.

1. “Placemaking” Miami as a tech hub will take some hubris.

Sam Altman, president of incredibly successful startup incubator YCombinator, said in his Start-Up City remarks that Silicon Valley is a “ten times better” place to launch a company than anywhere else – including Miami. Several speakers that followed Altman took issue with that comment. 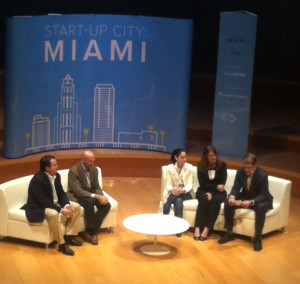 But Melissa Krinzman, co-founder and partner of Krillion Ventures and managing director of Venture Architects, noted that we in Miami could do ourselves a favor by emulating Altman’s sentiments about his own city.

“You hear Sam talk and he has so much bravado about Silicon Valley. It’s almost a ‘benevolent arrogance,’” said Krinzman. “We need to share that bravado here. We need to be fans of this community and we need to have more of these conversations.”

Some entrepreneurs who have achieved success of late are already sharing that kind of confidence. Will Weinraub of LiveNinja, who announced at Start-Up City that his company just finished raising an additional $500,000 from investors, was one of them.

2. We may need to stop saying “startups.”

Paul Singh, founder of Disruption Corporation and former partner of 500 Startups, addressed the Start-Up City audience with a presentation on “Seeding a Start-Up Ecosystem.” Armed with data-driven powerpoint slides, Singh discussed how technology has changed the game of investing in early-stage companies.

Investors in earlier eras had limited access to young companies raising money and were forced by technological and market limitations to make investment decisions based on little more than “gut feelings” about a business’ potential. Today investors have more data, market transparency, and access to deals than ever before – plus the tools to conduct extensive online research on a startup. Funding platforms like Miami-based EarlyShares are portals for this new kind of investing.

How can early-stage companies appeal to today’s angel investor? By focusing more on the traction of their company than on its concept.

“Traction is the new intellectual property,” said Singh. “You cannot raise money on an idea anymore.”

Research has shown that the most common reason for startup failure is premature scaling: spending resources on initiatives beyond the essentials of the business before appropriately defining the market and product.

How should local entrepreneurs avoid scaling their businesses too quickly? On a Start-Up City panel on “Designing for Growth,” Steve Repetti, co-founder of CrunchFire Ventures, said it boils down to getting extensive market validation for you product – and planning for the future as you do.

“You need to invest a lot of time in getting feedback from your users on your product,” said Repetti. That feedback is critical to knowing whether or not future customers will use or buy your product.

Since it takes money to scale a business, however, startup founders often find themselves spending so much time chasing their next financing round that the core business falls by the wayside. Thus, it’s crucial for entrepreneurs to find and partner with investors who appreciate the vital importance of staying focused on operations and validation.

“Go to the bigger investors even before you’re ready for them, and tell them what you’re doing,” said Repetti. “Tell them you’re out getting validation, and come back with the data to show them you’re ready.”

4. It’s all about passion, in more ways than ever.

When being interviewed by Start-Up City host Richard Florida, Joel and Leticia Pollack – co-founders of Miami’s beloved Panther Coffee – said that they didn’t think of themselves as entrepreneurs, per se. They considered themselves foremost as “coffee people” who’d pursued a goal they were passionate about: bringing high-quality coffee to the South Florida community.

The theme of passion came up again and again at Start-Up City – and not just in the context of entrepreneurs following theirs to found and launch companies.

“People neglect the fact that there’s a lot of passion on the side of people who invest in startup companies,” said Joanna Schwartz, CEO of EarlyShares, a platform for equity crowdfunding investing. Schwartz calls her company’s philosophy Passionomics – “creating value at the intersection of personal passion and investing.”

Ultimately, it will take passion from investors, entrepreneurs, government officials, non-profit groups, the media, and many others to make Miami’s future as a startup hub into a reality. But following Start-Up City (and in advance of the eMerge/Techweek Miami conference in May), it’s clear that the seeds of that future have already been sown in this community.

“There’s a lot of passion here about turning Miami into an urban tech hub,” said Peter Kellner, Co-Founder of Endeavor Global. “People are dedicating a lot of time and energy into making this happen.”

Here is a recap by OurCityThoughts.org