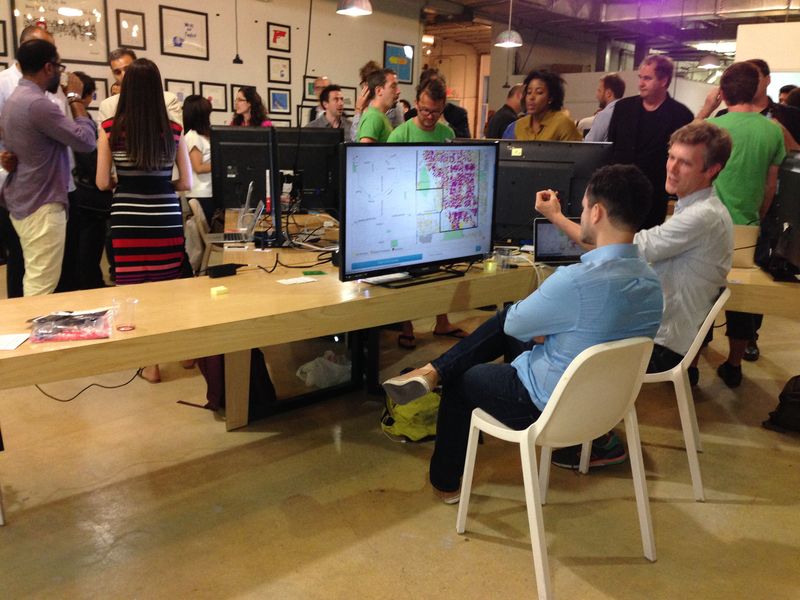 From Nairobi, BRCK created a device that eases connectivity in remote areas of the world, as well as urban coffee shops. From Miami, PWRStation offers simple, affordable solar energy solutions in a box. From San Francisco, HandUp provides a way to directly fund a neighbor in need.

These were just a few of the two dozen startups from around the world participating in this week’s inaugural two-day Smart City Startups event, a gathering of entrepreneurs, investors, foundations and urban leaders looking at how to help startups build smart cities. 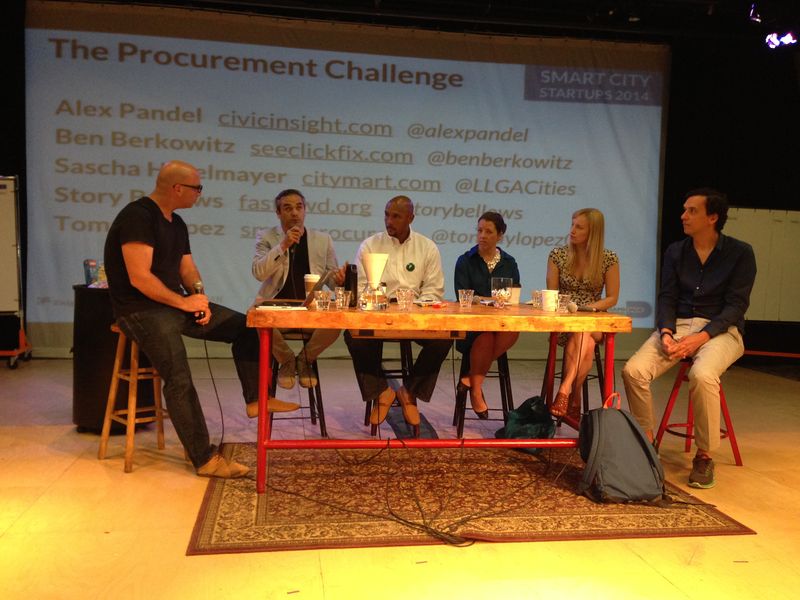 The time is now to bring cities and technological solutions together, said Shaun Abrahamson, CEO of Miami startup Urban.Us, an angel investor and author of Crowdstorm. Budget-strapped cities need the innovation and agility of startups to tackle our toughest urban challenges and find sustainable solutions, he said. That’s why Urban.Us hosted the event, which explored how to best support startups working on problems such as mobility, sustainable building, governance and service delivery, and showcased these promising startups. In addition to PWRStation, local startups participating included Learner Nation of Miami, SmartProcure  of Deerfield Beach and  WhatUpBridge of Miami. Much more interactive than many gatherings, the social entrepreneurial startups worked together in small groups to come up with tech solutions and strategies to urban problems, particularly in the areas of partnerships, procurement and funding. On Friday morning, for instance, the group of about 100 people looked at procurement, and the ways to improve how cities put calls out for contracts. Panelists at Smart City Startups said the way most municipalities do this process stifles innovation.

Most of the time governments put out their solution to a problem — for instance, we want a street-cleaning robot — and ask for proposals. Instead, they should post the problem they want to solve, such as we have gum on the street that needs to be cleaned, and market the challenge far and wide. They are likely to receive many more proposals — ideas they probably hadn’t even thought of that are more cost-effective than the street-cleaning robot — and they are likely to solve their problem significantly faster and cheaper through technology already developed, said Sascha Haselmayer, a fellow with Ashoka, a global network of social entrepreneurs.

Haselmayer’s Barcelona-based social entrepreneurial company developed Citymart.com, which offers cities a simple tool to seek out innovative solutions to their problems. It’s already being used by 53 cities. Lorena García Durán, who runs the Miami Ashoka office, saw his startup last year at an Ashoka event in London. “When they started telling me about it, I said, ‘Oh, my God, this is exactly what we need in Miami,’ ” she said. She urged Haselmayer to explore bringing it to Miami, and he is. 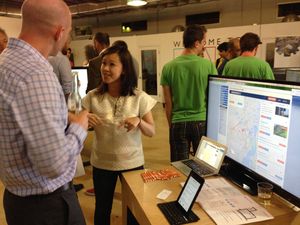 But Thursday evening was all about the demos. The LAB Miami in Wynwood bustled with energy as government staff members and other members of the community got to browse the displays and ask the startups about their solutions. Many of the startups began as local solutions with plans to scale nationally or globally.

HandUp, for instance, is piloting its solution in San Francisco but wants to expand to other cities and partner with community nonprofits that help the homeless and others in need. Neighbor.ly, of Kansas City, is a crowdfunding site to help community projects; The LAB Miami’s Idea Garden was funded there. But Neighbor.ly wants to expand its platform of services to communities. More than 200 cities and organizations already use Public Stuff, developed in New York, to engage their users and improve access to services. Transit App, of Montreal, which makes real-time data on public transit friendly and accessible, is already being used in 65 metro areas, CEO Sam Vermette said. Next up is a seamless payments system. "We want to be the Uber for public transit," he said. 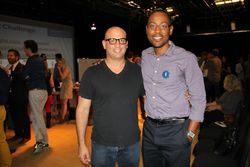 And bottom photo: Shaun Abrahamson and Stonly Baptiste, co-founders of Urban.us; Photo by Binsen Gonzalez of Our City Thoughts.