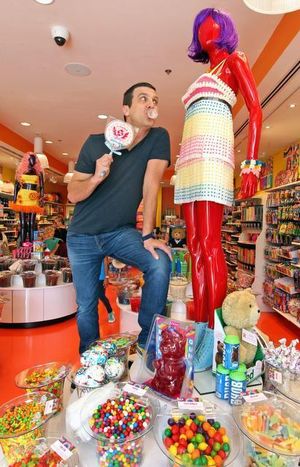 Escape to the kaleidoscopic world of IT’SUGAR, and all your nostalgic dreams of colorful candy will come flooding back.

It’s a candy lover’s heaven, filled with guilty pleasures of all kinds.

“IT’SUGAR is not just a candy store,” said President and Chief Executive Jeff Rubin. “We’ve really positioned ourselves as a gift store that lives at the intersection of attitude and fun.”

Founded in 2006, the chain of candy stores, headquartered in Deerfield Beach, has quickly expanded to become one of the nation’s largest and fastest-growing specialty retailers of candy.

IT’SUGAR has 64 stores nationwide, including 13 in Florida, with stores in Dadeland Mall, Sunset Place, Miami International Mall, Aventura Mall, Sawgrass Mills, Sunrise and Pembroke Pines. A store in Coconut Creek is scheduled to open in November, and Rubin is scouting sites in Miami Beach or near downtown Miami. By the end of the year, he expects to have 80 shops in all.

Inside the company’s newest local store, which opened April 11 at the Shops at Pembroke Gardens in Pembroke Pines, shelves and displays are filled to the brim with every kind of candy, including gummy bears from mini-size to giant, and gift items like plush toys and pillows. Round tables are loaded with plastic bins of bulk candy — with throwbacks like Swedish mini fish, candy corn, wax bottles and hot tamales — to be scooped into a bag or Chinese food-type box.

“We sell humor,” said Rubin, 50, amid the store’s playful music, including, at one point, Candy Man. “We sell fun.” In all, the company sells more than 2,500 different choices of candy, he said.

“When you go into IT’SUGAR, it’s not very serious. It’s sugar,” said Rubin, who refers to himself as Chief Gummy Bear. “Eliciting laughter is our main goal with so many of the items we carry. It makes you have fun and get away from the gray skies of everyday life.”

There is even a box of gummy bears shaped like a mouthful of teeth called Addicted to Sugar. The box features a child sitting in a dentist’s chair.

In America’s health-obsessed society, Rubin argues that there is still a place for candy.

“Candy is such a relief from the everyday world, and it’s fun. Why not treat yourself,” he said. “The quantity people treat themselves is up to them. You can have one gummy bear or 50 gummy bears” said Rubin, who looks very trim, but admits he is “a sucker” for gummy bears, particularly strawberry ones.

Indeed, Americans have never ended their love affair with candy, spending $33.6 billion at retail in 2013, up 2.5 percent from 2012, according to figures from the National Confectioners Association, based in Washington, D.C.

“Candy is so much a part of life in America,” said Susan Whiteside, a spokeswoman for the organization. “It’s difficult to think of Halloween without trick or treat, or Easter without a basket, or Christmas without candy canes.”

Even during the Great Recession — the same time that IT’SUGAR was expanding — the industry continued to grow, she said.

“While candy is certainly a luxury, it doesn’t have a particularly high price, so when you think of all the things you need to cut out of your life to trim your budget, it’s easy to find a couple of dollars for candy,” Whiteside said. “It may not be the year for buying a car or taking a vacation, but you can still have a nice box of chocolates at Valentine’s Day.”

In fact, IT’SUGAR caters more to adults than to children, said Rubin, recalling that when he was starting the brand, he had 2-year-old twins. Each time he went to CVS, they wanted to tag along, because they knew that Aisle 3 was the candy aisle. To create a candy store to compete with Aisle 3 would have been tough. So instead, he has focused on adults — who often bring along their kids as they run errands or stroll through a shopping center after dinner.

“Why does a candy store have to be for kids?” Rubin said. “Adults have just as big a sweet tooth.”

Kathy Gonzalez stopped into the new Pembroke Pines store for the first time one recent morning, and bought old-time boxes of chocolate cigarettes.

By noon, many more adults had filled the store.

“It’s a happy store,” said Diana Gigliotti, 47, who lives in Weston. “I love it. We needed something like this here.”

IT’SUGAR has its own line of mega-boxed candy that it calls the World’s Largest — Laffy Taffy, Gobstoppers and Nerds — as well as huge packages of Twizzlers, Rice Krispies Treats and others, priced from $14.99 to $19.99. The company also sells private label packaged goods wholesale to such retailers as Urban Outfitters, Kohl’s and Macy’s.

In addition, the stores carry adult-oriented gag gifts like bacon-flavored lip balm, a doughnut-shaped mug, a “Mustachifier,” candy bra and underwear, and pillows with sayings like “If I don’t remember, it didn’t happen.” Overall, items are priced from 99 cents to $100.

“If you buy a gift from IT’SUGAR it’s for the sole purpose of making them laugh,” Rubin said.

Growing up in Birmingham, Mich., Rubin remembers buying Bazooka bubble gum for 3 cents and selling it for a dime during recess. “I’ve been selling candy my whole life,” he said.

In 1995, Rubin struck out on his own. He approached FAO Schwartz with the idea of a candy store, FAO Schweetz, and became a minority partner in the venture. Then, in 2001 he partnered with Dylan Lauren, the daughter of Ralph Lauren, to launch Dylan’s Candy Bar.

“In 2005 I said, ‘For the past 10 years I’ve been creating candy stores for over-privileged Park Avenue kids. It was time to create something for America.’ ”

“I just felt like I was raised to create a national chain,” Rubin said. “It’s been my dream.”

Rubin, who lives in Boca Raton, started IT’SUGAR with one employee — himself. In 2008, he had five employees in the home office. Today, the headquarters has a staff of 60, with more than 800 at stores around the country. IT’SUGAR also licenses stores internationally, in the Cayman Islands, Venezuela, Panama and Dubai. In addition, there is an IT’SUGAR inside Selfridges in London.

Most stores, like the one in Pembroke Pines, average 1,500 square feet. But the company also has flagship stores in Los Angeles, Atlantic City and Las Vegas that are 5,000 square feet, as well as a 7,000-square-foot store in Myrtle Beach.

Besides mass retailers and local mom-and-pop candy stores, competitors include chains like Dylan’s, which has four stores — including one on Lincoln Road in Miami Beach, and Sweet Factory, which has 73 mostly franchised stores.

He acknowledges that the next step will likely be taking the company public through an initial public offering. “It’s a strong possibility for the near future, within two years,” he said.

Barry Rosenbaum, president of Nassau Candy, IT’SUGAR’s distributor, has known Rubin for more than 25 years and applauds his vision.

“Jeff is amongst the most creative thinkers within the specialty confectionery category, and has any number of times reinvented himself, and helped to reinvent the specialty confectionery category,” said Rosenbaum, co-owner of the Hicksville, N.Y.-based company. “As a result, he has helped to build that category for the industry, and IT’SUGAR is a good example of that.”

Employees: 60 at headquarters, more than 800 at stores.

More stores to come in Florida: Coconut Creek is opening in November.

Photo above: Jeff Rubin, the gum-popping president and CEO of IT’SUGAR, strikes a pose near a mannequin in a candy dress and an array of other colorful products for kids and adults in his Pembroke Pines store. PHOTO BY CHARLES TRAINOR JR. / MIAMI HERALD