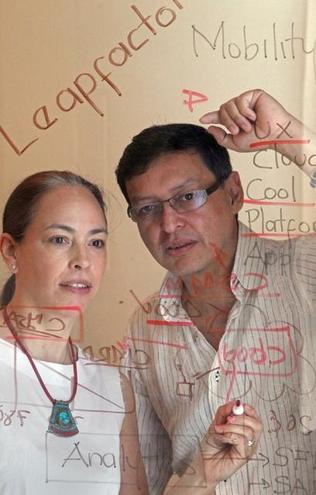 Lionel Carrasco and Marcela Henao co-founded Leapfactor, a Miami technology company, five years ago on credit cards and savings. They’ve since grown the company to 50 employees and about $3.5 million in annual revenue, and Leapfactor has created dozens of apps for companies working in direct sales, employee training, retail and business analytics.

This week, the co-founders were chosen as Endeavor‘s next two more entrepreneurs from Miami, the organization’s first U.S. affiliate, at an International Selection Panel held in Florianopolis, Brazil, this week. The two Miami entrepreneurs were part of the 29 selected high-impact entrepreneurs leading 16 companies in nine countries around the world.

Leapfactor provides business apps to transform the way companies engage with their sales force, employees, partners and customers. Leapfactor’s primary product, Salesfactor, provides tools to increase revenues and efficiency, and has attracted customers such as Avon, JPMorgan Chase, AstraZeneca, L’Oreal and Sherwin Williams. With 26 million salespeople in the U.S. alone, the potential market is huge, and the company is also launching an international expansion, including into China and Thailand, said Carrasco, Leapfactor’s CEO.

"We want to help build the entrepreneurial ecosystem in Miami,” said the Bolivian-born Carrasco, who spent a decade in Silicon Valley and has years of experience in mobile development. “But at the same time, we have found going through this with Endeavor to be a transformational experience. We have met with top-level people from around the world and they are there to help you.”

At the International Selection Panel, the culmination of a multi-step selection process, international business leaders interview candidates about their businesses and high-impact potential, and then vote on whether candidates become Endeavor Entrepreneurs. The Leapfactor co-founders join the first three Miami entrepreneurs, Jesus Rodriguez of KidoZen and Roger Duarte and Sam Gorenstein of My Ceviche.

Endeavor looks for founders of companies like Leapfactor that have high-growth business models and are ready to scale globally. The nonprofit provides the selected entrepreneurs with services, mentorship and connections. Endeavor Miami launched operations in September, backed by the John S. and James L. Knight Foundation and a local board of business leaders. Endeavor now supports 917 high-impact entrepreneurs from 585 companies in 20 countries.

Said Matt Haggman, Knight Foundation program director for Miami: "The caliber of entrepreneurs chosen to be part of Endeavor is testament to Miami’s rising pool of talent — supporting them lays the groundwork for drawing new opportunities and investments to our city."

The Miami Herald profiled Leapfactor in March -- read it here.