« More than 700 expected for WordCamp Miami; see who's speaking | Main | NFTE finalists get ready to pitch at eMerge Americas Techweek » 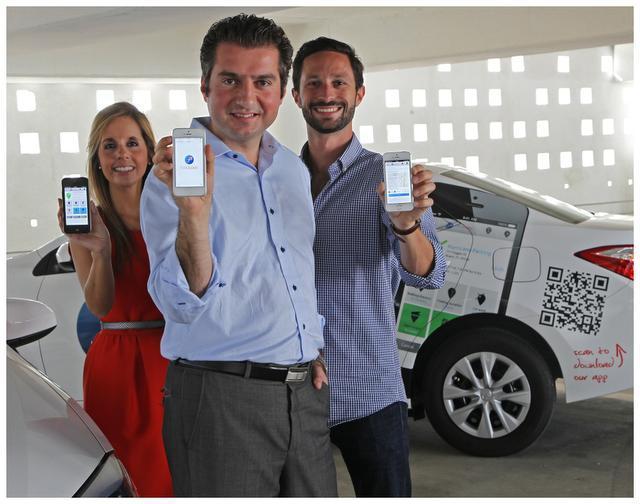 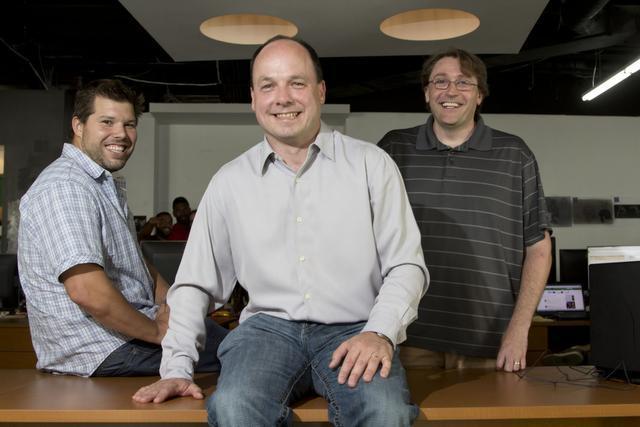 From left, John Osvald, John Schappert and Jason Andersen co-founded Shiver Entertainment, a video gaming company. They have been on a hiring spree and now have about 30 employees and will double that soon. CW GRIFFIN / MIAMI HERALD STAFF

This week’s eMerge Americas Techweek is designed to promote the region’s tech community and convince companies that Miami is the place to grow their businesses. Some are already getting the message.

In the past 20 years, John Schappert has become a video game-making star in Orlando, Silicon Valley, Seattle and Vancouver. Along the way, he founded and sold Tiburon Entertainment to publicly traded Electronic Arts, created the popular Madden NFL football game series, worked for Microsoft’s XBox division and helped run FarmVille maker Zynga. Recently he returned to Miami, where he and a team of 30 are creating games for his new company, Shiver Entertainment.

Says the self-taught programmer, “We hope that our decision serves as a signal to other tech companies that Miami is a great place to do business.”

Schappert and others in South Florida’s burgeoning tech community will have plenty of opportunity later this week, when thousands of industry executives, entrepreneurs and investors descend on South Florida for the inaugural eMerge Americas Techweek.

Kicking off Friday with a summit of local and Latin American mayors and a hackathon, the conference’s main event opens Monday for two days of panels, presentations, contests and — this being Miami, parties — designed to promote South Florida as an emerging technology hub.

In addition to mega players such as IBM and Accenture, about 100 early-stage companies — nearly half of them from Latin America — will exhibit at the show.

The idea is an Art Basel-like tech conference that will showcase South Florida and draw startups to the region, accelerating the area’s ingrained entrepreneurial spirit and its sprouting tech scene.

The bait: diversity, quality-of-life, culture, geographic position and a cost of living significantly lower than in traditional high-tech cities.

“Startups are really at the heart of the ecosystem — companies starting here, hiring employees here, customers buying from these companies,” said local technology entrepreneur Manny Medina, who founded the Technology Foundation of the Americas to help establish a tech hub. “Once you have a company establish itself here, the multiplier effect is immense.”

The event is the brainchild of the one-time real estate mogul who presciently turned his company, Terremark, to technology in 2000. The company’s NAP of the Americas data access point in downtown Miami is the funnel for nearly all data transmissions among Latin America, the Caribbean and the rest of the world.

In 2011, Medina sold Terremark to Verizon for $2 billion. The proceeds have gone primarily to Medina Capital, his tech investment firm. But seed money, and much of Medina’s time and persuasive energy, has gone to rallying business, government and educational institutions around the not-for-profit event.

The impetus is simply hometown pride. “The ecosystem starts with innovation, and innovation is being driven by tens of thousands of people around the world,” Medina said. “The more of them that we can drive here, the more it will accelerate our ecosystem.”

Schappert’s company is evidence that the strategy is starting to bear fruit. Shiver Games has moved developers, designers and artists and their families here from all over the country. And he is not the only entrepreneur who is betting big on South Florida. In recent months, other early-stage companies have decided to relocate to the tri-county area.

ParkJockey, a travel and hospitality company that recently launched its parking app in Miami and London, chose the Magic City as its base. Posto7, which is developing a recommendation app far different from Yelp, recently relocated from New York City. Others have come from Latin America, including mobile payments company YellowPepper and social media publishing startup Everypost. Still others are setting up small U.S. offices and testing the waters a bit before moving.

Nearly the entire 2014 class of downtown Miami’s Venture Hive accelerator is international, and most of the tech startups already are applying for visas to stay, said Ivan Rapin-Smith, program director for the structured education and mentorship program. European companies also have been checking this area out, including Spain’s Sapos Y Princesas, which created a social platform for parents. 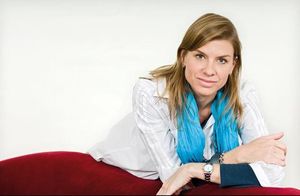 “Twenty years ago, this was not a place you wanted to work or start a company,” said Nora Kurtin, founder of Sapos Y Princesas. She recently relocated to Miami and plans to launch a sister company for the U.S. Hispanic and Latin American market this summer.

What changed? She sees Miami quickly evolving into a city conducive to startups. “It is a great moment to be here,” said Kurtin (pictured here). “You have talent, you are right next door to Latin America, and it’s easy access for Europe.”

To be sure, the formation of a local tech hub is very much a work in progress, fostered in large part by the Knight Foundation.

During the past 18 months, the foundation’s Miami office, led by Matt Haggman, has funded about 50 projects and organizations, from co-working spaces such as Wynwood’s The LAB Miami to community events including The Atlantic’s Start-Up City: Miami.

In its biggest move to date, the foundation invested $2 million in a partnership with global nonprofit Endeavor, convincing the highly prestigious program to open its first U.S. base in Miami last year.Endeavor already has identified five high-impact entrepreneurs for mentorship designed to catapult companies to an international scale and accelerate the ecosystem.

ParkJockey is one of the recent startups to place its bet on Miami’s future. The startup, which gives consumers a free app and platform to easily compare prices, book and pay for their parking spots in advance, launched quietly in Miami Beach during Art Basel and officially launched earlier this year. The service, which currently offers spaces in downtown Miami, Brickell, Wynwood and South Beach, already has booked more than 1,000 customers, said Umut Tekin, CEO of ParkJockey.

As of now, ParkJockey has partnerships with more than 80 locations, including surface parking lots, parking garages and valets.

With $2 million in investor funding, ParkJockey plans to expand into Midtown and Coconut Grove and is adding services such as monthly parking. The company has 18 employees and, says Tekin, is growing quickly.

Miami provides a convenient base for ParkJockey’s global aspirations. The company recently launched in London and hopes to enter the New York market in the summer, said Igal Aciman, who recently was hired as head of global sales and marketing. After that, the team is looking at Amsterdam, Paris and Istanbul.

That same international access, along with a culinary culture and relative affordability, made Miami Posto7’s top choice, luring the company from New York City. Miami’s position as gateway to Latin America also was an attraction for the company, named after a lifeguard station in Rio de Janiero that serves as a meeting place. 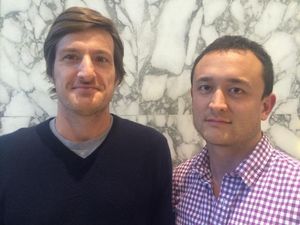 Posto7 is creating a free app by the same name that will serve as a meeting place for friends and family to share their favorite bars, restaurants and hotels with each other, producing relevant and reliable recommendations. In the past two months, the company has signed partnerships with booking.com, Uber and Oasis Collections. It has raised about $900,000 in investor funding.

“We plan on building a successful business with Miami as our headquarters,” said Patrick Curley, who founded the company with George Yates (pictured here). “Miami is a large, metropolitan city built around hospitality — all elements Posto7 needs in order to be successful.” 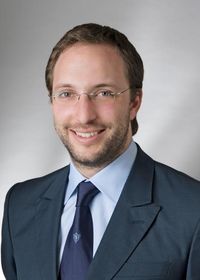 While Posto7’s co-founders moved south, Serge Elkiner of Yellow Pepper, a fast-growing provider of mobile-banking and payment solutions in Latin America, moved north. The company, originally based in Ecuador, is moving its headquarters into converted warehouse space in Wynwood by early summer, he said.

Yellow Pepper announced last year it received $15 million in additional venture funding, bringing its total funding to $30 million. The company, which now offers mobile banking services in eight countries, is developing an app for mobile payments that can be used everywhere, without a card. In coming months, it plans to launch pilot payment projects in Mexico and Colombia.

The company has about 54 employees around the Americas. It plans to quickly grow its Miami team to about 15 people in technology, marketing and operations, said Elkiner (pictured here). 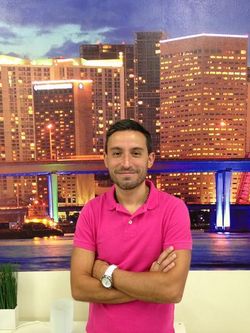 For Fernando Cuscuela (pictured at left), CEO and co-founder of Everypost, a social media publishing app, acceptance into the Venture Hive accelerator was enough to persuade him to move his family from Buenos Aires to Key Biscayne. He recently secured a three-year investor visa and is seeking to hire five people in Miami, primarily in marketing and business development. Although his technical team of six remains in Argentina, Cucuela has raised seed funding and plans to build his company here.

Despite the enthusiasm, Miami tech companies face obstacles not as commonly found in more established communities such as Silicon Valley and Boston. Access to capital is limited in South Florida, especially for startups and early-stage companies. And some companies report that talent is harder to find here than they’d like.

“These things take time,” said Peter Kellner, co-founder of Endeavor and founder of Richmond Global. “Capital follows the entrepreneur. It’s really about the entrepreneur. … The fact is, we don’t have a base of high-impact entrepreneurs yet, and that is what we all are building. What Manny is doing with eMerge is really bringing everybody in, and that can truly be catalytic.”

Juan Diego Calle, founder and former CEO of .CO Internet, sold his company for $108 million this month. He said Miami has plenty of talent — it’s just “temporarily displaced.” He’s referring to tech entrepreneurs and developers who grew up here and moved away but could be persuaded to return.

That was the case with Schappert, who says he is happy to be back in the area where he grew up. An alumni of Miami Sunset Senior High and Miami Dade College, Schappert has been drawn back by family ties, the water and the weather.

He and Shiver co-founders Jason Andersen, his partner in Tiburon, and John Osvald, formerly of Zynga, are holed up in a temporary space in South Miami as the team creates its first game, still under wraps. They have recruited professionals from Texas, Chicago, Iowa, Ohio, California, Minnesota, Louisiana and Boston and found another locally through an ad in the Miami Herald. Shiver is still actively hiring and is working with local universities for its internship program.

“When you get people here, they like it,” Schappert said. “And when their families settle in, it’s a huge boon to the economy. Our 30 people are buying homes, buying cars, they are renting nice places on Brickell.”

What: The centerpiece of eMerge Americas Techweek is a series of summits on May 5-6 that will feature technology and innovation experts on the themes of healthcare, finance, smart cities, education and entertainment. Other events include a Startup Village and Launch Competition, with $150,000 in prizes; an Americas-wide hackathon with $30,000 in prizes; the eMerge Game Connection; a Smart Cities Expo; a mobile summit; a hiring fair and the STEM Tech Olympiad for K-12 students.

When, where and how much: May 2-6 at Miami Beach Convention Center and other venues. There are various pricing levels, ranging from an “Expo” pass for $55 to a VIP ticket for $1,350, according to the website. Some special pricing is in effect through April 29.