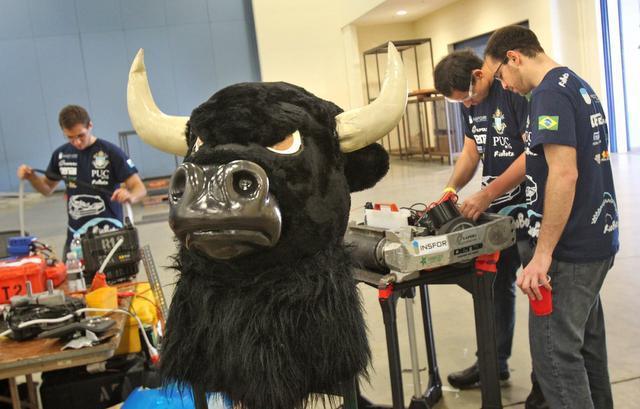 It took less than a minute for K2 to deliver the knockout punch, and GLaDOS  didn’t take losing well. He shook, flipped twice — and burned.

The firey robot delayed the BattleBots competition about 30 minutes yet it didn’t dampen the spirit as the STEM Tech Olympiad got underway at  eMerge Americas Techweek on Sunday.

Edward Roski, founder of BattleBots, explained that battery fires do happen occasionally — that was the second one on Sunday. But safety comes first, he told GLaDOS’ young builder who wanted to try to save some of GLaDOS’ hardware.

Hundreds of kids, their parents and teachers participated in Day One of the three-day Olympiad, which also includes several other competitions and interactive exhibits for the future engineers and programmers.

Nola Garcia, CEO of the United States Alliance for Technological Literacy, is producing the STEM Tech Olympiad at the Miami Beach Convention Center for eMerge. In the BattleBots competition alone, 145 teams, most from the United States but also from Brazil, Mexico, the United Kingdom and Canada, are competing in the three-day double-elimination tournament, one of the highlights of the Olympiad. Participants range from age 10 through college students but most were in middle or high school, Garcia said.

The competition begins long before the robots get in the ring, which is enclosed in bullet-proof glass for safety reasons. Teams first have to build the robots, working together, using their creativity and engineering skills. “This teaches the whole environment — budgets, time constraints, team work, deadlines,” Garcia said. “It’s a microcosm of what they will get in the real world.”

And it’s a sport for the brain, added Roski. "We’ve had paraplegics who have built and driven robots with their chins.” That pi equation you learned in school — you use it here. “It makes math, science and physics make sense," Roski said.

Paul Kynerd, coach of Miami Lakes Education Center’s robotics team, has 12 teams competing. They are all part of the Cambridge Engineering Program magnet program at the Miami-Dade public school. "They are all gifted engineers," he said, rattling off all the prestigious universities the students are heading to.

Kynerd said for the first time, the school had more females than males interested in robotics in the incoming freshman class.

That doesn’t surprise Alan Crockwell, robotics coach for 16 years and a teacher at Carrollton School of the Sacred Heart, a private girls school in Coconut Grove. He says 60 to 100 girls participate every year in the after-school, noncredit program — and the student body at Carrollton is just 300.

Sabrina Tamames, a Carrolton 10th-grader, is competing along with teammates Luli Magolnick, Olivia Easton, Natalie Battle, Ceci Dearmas, Elena del Barrio and Caro Fernandez. Her team came in fourth overall in a California competition last year, where they were competing against mainly college students and professionals.

Sabrina, in her second year of robotics, especially likes the creative building process, sans instructions. "When something doesn’t work, you just figure out how to fix it."

She is also a summer intern at the University of Miami, and part of a team working on a device that removes cancer cells from blood. She wants to be a biomedical engineer. "Before robotics last year I probably would have said an actress," she said.

Monday and Tuesday, the STEM Tech Olympiad continues at eMerge Americas Techweek, which includes a conference, expos, contests and parties designed to shine a light on and promote the tech community in South Florida. Nearly 5,000 people — tech entrepreneurs, technologists, local and international executives, government leaders and students — have registered for the activities, which hit high gear Monday. “It’s where the suits meet the geeks,” said Diane Sanchez, CEO of eMerge Americas, who was wrapping up an eMerge Americas hackathon on Sunday.

Garcia said STEM Tech Olympiad activities this week will include underwater robots that kids can drive, an international bridge building competition, 3D-printing demonstrations, a robot-building competition, and demos of a surgical robot from Mako Surgical. On Tuesday, teams of students, including Sabrina, are participating in a challenge in which they design and build robotic devices that will help people with disabilities.

Photo above: Members of Team Riobotz from Brazil put the finishing touches on their robot Touro. Below, future engineers find a quiet place to work.  PATRICK FARRELL /  MIAMI HERALD STAFF. 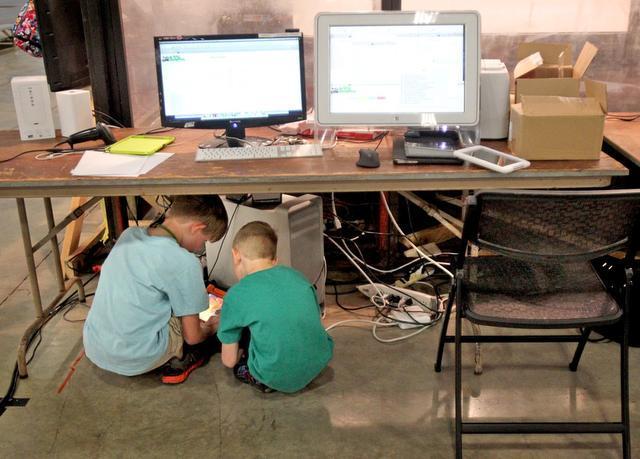