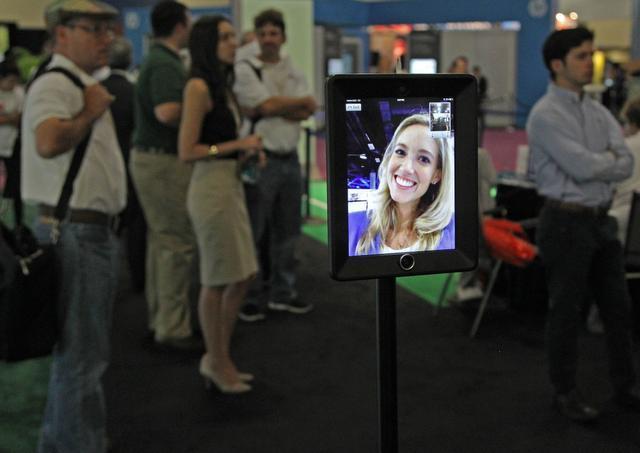 Miami is famous for putting on shows, but last week it wasn’t about cars, or boats or swimwear. Last week, the Miami Beach Convention Center buzzed with technology talk.

And that is exactly what the organizers of eMerge Americas Techweek, Miami’s biggest homegrown tech conference, wanted to happen, said serial entrepreneur Manny Medina. He’s the visionary behind the event, which attracted more than 6,000 attendees.

“It established that a few thousand more people than we expected are thinking ‘Miami technology’ and being wowed by the level of content,” Medina said. Though Miami isn’t yet in the same tech-talk mindspace as Silicon Valley or Boston, eMerge did its job to put South Florida on the radar, he said. “It all starts with changing the mindset about Miami technology.”

To be sure, the eMerge conference is modest compared to many tech and entrepreneurship conferences, such as South by Southwest, the annual nine-day interactive-music-film extravaganza in Austin, Texas, that attracts more than 70,000 to the city. Even a small tech conference in San Francisco can draw 20,000 people. This inaugural conference fell on the realistic side of initial lofty dreams of marquee names and massive corporate sponsorship. In the final week, organizers turned to deal sites including Groupon to boost sales.

Still, last week’s event drew at least 1,000 more than the conference goal of 5,000 registrants for seminars featuring 150 speakers on technology innovation, eight expos ranging from smart cities togaming, an invitation-only mayoral summit, corporate exhibits, startup and kids’ competitions, parties and networking. The conference was organized by Medina’s Technology Foundation of the Americas, whose mission is to promote and accelerate Miami as the technology hub of the Americas.

Year two of eMerge Americas is already on the books: April 29-May 5, 2015, with the main conference again taking place at the Miami Beach Convention Center, Medina said. His goal next year: 10,000 attendees.

Sponsors and attendees counted the first-year event as a success, with only minor logistical glitches typical of a first-time event.

“I think it really takes things to another level,’’ said Matt Haggman, Miami program director for the Knight Foundation, which supported the conference with a $250,000 grant. “It surpassed our expectations in terms of numbers ... that is a credit to Manny, his vision and his team's vision. ... It cut across the rich, diverse environment that is Miami’s tech entrepreneurship community. ... It demonstrates the proof of concept.”

Building the tech and entrepreneurial communities has been a chief local focus for Knight. Over the past 18 months, it has committed $6 million in funding to more than 50 projects including a co-working campus, incubators and mentorship, youth coding education and angel network development. Those efforts and others have encouraged developments such as the recent announcement by Microsoft that it will locate its first U.S.-based innovation center in downtown Miami, a partnership with the county, city and Venture Hive, the entrepreneurial education center where it will be based.

“I couldn't be happier with how our community came together to support the eMerge Americas movement and help put Miami-Dade on the global tech map,” Miami-Dade Mayor Carlos Gimenez said in a statement. “Mayors from throughout Latin America, the Caribbean and Spain took part in the first-ever Mayoral Innovation Summit, where we discussed the innovations that are transforming our cities,” wrote Gimenez.

The law firm of Greenberg Traurig, which has a tech and entrepreneurship sub-practice whose clients include Medina, supported the effort valued at an undisclosed amount. Medina Capital, Medina’s investment fund, gave $250,000, office space, logistical support and countless staff hours.

Said Jaret Davis, co-managing partner of Greenberg’s Miami office: “We were very happy with the outcome,” both the quality of speakers and attendees, and the sense of connectedness that the conference created. He said he expected his firm would continue to support it.

Reflecting on the conference, Medina noted the strong participation by local universities, companies and institutions and the diverse nature of the speakers as highlights.

“What we tried to do was be diverse and edgy but always with a technology twist. ... One of the things I got the most compliments on across the board was the quality of speakers,” said Medina. “That surprised people more than anything, all the diversity.” They included talks by Dr. Anita Goel, who spoke about herX Prize winning diagnostic device that detects HIV with a drop of blood; Paul Maritz, CEO of Pivotal, a software technology company; rapper/tech investor Pitbull; Cuban blogger Yoani Sanchez, who talked about the technology that allows her to connect with the outside world, and X Prize founder and futuristPeter Diamandis.

Marquee names like Amazon’s Jeff Bezos and Facebook’s Sheryl Sandberg — both went to high schools in Miami-Dade — would have been a draw. “I think it will be easier to get one or two more marquee names next year,” Medina said.

To be sure, there were lessons learned.

“The first day we had a food truck crisis — the lines were just huge, the food truck vendors were overwhelmed, we needed a lot more trucks, we learned,” Medina said. The eMerge team also will refine the registration process, opening it earlier in the morning and promoting its Sunday registration much more next year.

“This was the first year, so the logistics behind the event were pretty challenging. We didn’t know what it was going to be. And from a marketing standpoint, we were promoting an event people didn’t know,” Medina said. “As we began getting the branding out there, they began getting a feeling what it was we were trying to do. But all of that will be substantially easier next year.”

Next steps include a revamped Technology Foundation of Americas website rich with information, resources and data for the South Florida and Latin American technology communities.

If Medina’s vision is fulfilled, eMerge Americas Techweek will grow into a South by Southwest-style annual event with Latin flair. Though organizers have not yet released a count of international participants, Medina said feedback from the participating countries — including Chile, Colombia, Mexico and Taiwan — leads him to expect more next year.

Several Latin American organizations used the conference as a platform for announcements. Leonel Fernandez, the former Dominican Republic president and current ​​chairman of the Global Foundation for Democracy and Development (Funglode), announced the launch of Dominicana Tech, a program that includes mentoring and training for technology entrepreneurs, an investment fund and R&D development, and said Miami will be a key partner. NXTP, a Latin American accelerator and seed fund, and Naranya Labs, a Mexican accelerator and fund, announced a partnership to create a $50 million fund for early-stage investments.

Chile sent 10 startups and later-stage companies. “During the two-day event we connected with potential investors interested in our company and we also connected with some key players in the education industry to leverage our distribution and market penetration in the U.S.,” said Alfonso Santiago, founder of StartSpanish.com.

Santiago said he will be returning next year. “I believe this event will continue to grow as well as the entire Miami tech ecosystem. In my personal opinion, eMerge will become the main tech event on the East Coast and the entry point for the most promising Latin American tech startups.”

That would be welcome economic development news for the mayor’s office, which said it would like to see increased participation in terms of the numbers of attendees and sponsoring companies, according to Mike Hernandez, Gimenez’s press secretary. As for allocations for next year’s event, he said, “We want to support it,” but that financial investment would hinge on post-event reports and the county budget.

Medina is optimistic. “Look what has happened with Art Basel, and only a sliver of the population collects art, only a sliver. Technology touches everybody,” Medina said. “Technology cuts across all industries. I think this could be the biggest event that Miami has on a yearly basis.”

On his radar: exploring the feasibility of an Innovation Center of the Americas with offices and incubator space, a data center, expo center and even living spaces. “Every city needs a beacon and this could be the beacon,” Medina said. “We are working on it.”