eMerge Techweek: For students, too

Students are getting into the entrepreneurial and tech action at the inaugural eMerge Tech Week conference in Miami Beach. 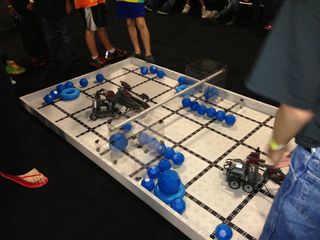 More than 150 elementary school students from various local schools watched student-built robots piling up blue balls at the Vex IQ Robotics competition at eMerge Americas on Monday.
Kids showed off their creations as they practiced off to the side, inside the conference's expo area.
"They designed and created robots that can do all things," said Elizabeth Ferrand, a teacher from Pinecrest Academy South Charter School, which offers classes in robotics.
For high school students, Network for Teaching Entrepreneurship (NFTE) is offering a competition for cash prizes for the best business ideas.
NFTE is a national program run through schools that gets lower income students involved in entrepreneurship.
Inside a dome on the expo floor of eMerge, young entrepreneurs who would later present their idea on the main stage in the competition, showcased their business ideas. The competition will offer a chance to compete in the national competition in Silicon Valley in October, said Alice Horn, executive director of NFTE South Florida.
Among the contestants were Jacob Makoulian and Kaleb Smith, students at Piper High School in Sunrise who created Makoulin Smith, a denim customization service. The business, Makoulian Smith, can distress and/or bleach denim jeans, jean jackets and other items, with a one-day turnaround, Makoulian said.
Other business ideas included Word Avenger, a video game created by  Gerlannda Asse and Frantz Senat that improves vocabulary, and Lepsy's App, develped by Karen Bonilla to explain epilepsy to children after her 5-year-old sister witnessed a classmate's seizure.
Ina Cordle
Update: And the winners of the NFTE competition were...

Bonilla created the app, which explains epilepsy to young children, after her five-year old sister witnessed a classmate having an epileptic seizure.

"It's an amazing feeling of fulfillment, " said Bonilla, who lives in Miami, after winning. She will now advance to the national Championship in Silicon Valley in October.

Placing second was Magic No Streak Cloths, by Alyssa Herman and Maggie Bodner of Coral Springs Senior High School. This team will also be going to Silicon Valley to represent NFTE South Florida and compete in the nationals.