A technology conference wouldn't be complete without video gaming, an industry that far outpaces the motion picture industry, generating $93 billion worldwide, according to Mark Marion, advisory board member for the Technology Foundation of the Americas. Latin America ranks as the second most heavily penetrated gaming market worldwide, after the Asia-Pacific region, and before the United States, he said. 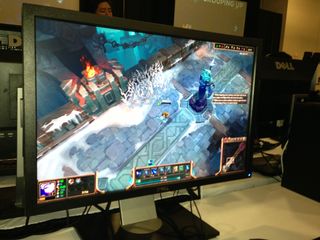 Games Zone had a large space in the expo area At eMerge Americas, offering an opportunity for game developers, game publishers and service providers to communicate and find ways to collaborate on projects.
Another goal, said Marion, was to get gamers involved. The conference provided an opportunity for the engineering, computer science and art design departments at local universities, including Florida International University, Miami Dade College, Florida Atlantic University and Nova Southeastern University, to recommend students for 30-minute mentorship meetings. Activities included  a "Riot Rumble"  -- an organized team competition for the game League of Legends, owned by Riot Games.
​"It's all about innovation and the industry important to us," Marion said.​
Ina Cordle