You remember Watson, the IBM computer that won in  Jeopardy? Well, now he’s gone to medical school and can help doctors with diagnoses.

Watson gleans information from journals, research and clinical trials as well as the physician’s knowledge of the patient to come up with potential diagnoses a doctor may overlook. Watson can also suggest detailed treatment plans, offering all the evidence and data that the computer used to come up with them.

Watson isn’t a replacement for your doctor, of course. Think of it as another point of view for the physician to consider. And it is just one of the big innovations rocking the healthcare world that experts discussed and exhibited at  eMerge Americas Techweek that closed Tuesday.

Healthcare technology innovation — and Miami’s place in the fast-growing area — was a big focus of the two-day conference, produced by Manny Medina’s Technology Foundation of the Americas and supported by dozens of companies, organizations and foundations, governmental leaders and universities. The conference, attended by about 6,000 people, included more than 150 speakers as well as expos, contests, parties — and plenty of networking.

“One of the biggest changes in healthcare of the last two or three years is consumers are starting to take control,” said Dr. M. Narendra Kini, president of Miami Children’s Hospital. Speaking at one of two dozen panels Tuesday, Kini offered an overview of new consumer technologies in the field, including telemedicine applications to access one’s physician anywhere, anytime. Say the patient is on a cruise ship. The ship doctor can use a telemedicine card to virtually bring the patient’s own doctor into the cabin, he said.

Apps can also track medications — and whether the patient is taking them — and keep a summary of what doctors have done — and even provide a video of the doctor’s instructions at discharge time, said Kini. A medical-tech innovator, Kini has opened an incubator at Miami Children’s to create and enhance sophisticated data monitoring that literally is at the doctors’ and patients’ fingertips.

“The next big advance will be first alerts to impending doom,” a huge move in preventive care, Kini said. “That’s what coming, and we are not far.”

But as another speaker noted, technology doesn’t always have to be cutting edge to get the job done. Dr. Joel Selanikio, CEO of DataDyne, a mobile data and messaging company, said that in Latin America  there is a huge need for medical applications that can be used with those $10 phones commonly referred to as “dumb phones.”

Selanikio says these “smart-enough phones” are essentially Internet portals and the only means of connection available in rural areas. Imagine the real-time data that can be collected and analyzed over these phones, as well as text message services for medication adherence, smoking cessasion and other uses. And the time is now, he said. “It we grasp this opportunity, we will make a difference.”

As for the not-so-distant future — 2020 — three billion new Internet users, mainly from emerging markets, will come online for the first time, representing an unprecedented opportunity for innovation, said keynote speaker Peter Diamandis, of Singularity University and chairman and CEO of the XPrize. Healthcare innovation is a main focus area in Singularity's research, and he said that there will be a $10 million XPrize awarded for game-changing mobile consumer technology for healthcare in the next 18 months. 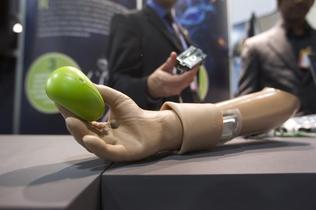 The healthcare theme ran from panel presentations to the expo floor, where Florida International University exhibited the first neural-enabled prosthetic hand, which uses wireless technology to stimulate nerves so the user can actually feel sensation (pictured).

And Cirle, a medical technology incubator company at the University of Miami Life Science and Technology Park in Miami, announced at the conference that Bausch + Lomb will license and commercialize its three-dimensional surgical navigation technology, the Cirle Surgical Navigation System, for cataract surgery.

Said Awdeh, “There are very smart people in Miami, and they will support you. The support I have found in Miami, I just don’t think I would have found anywhere else.”