Microsoft plans to announce Friday morning that it will open its first U.S.-based Microsoft Innovation Center in downtown Miami’s Venture Hive in June.

Why Miami? “There’s a great commitment to the local economy in Miami, and it’s a vibrant community. We also see a lot of alignment with the universities there,” said Akerkar. “It’s also a great hub and launching off point for Latin America from a business-building standpoint.”

The Microsoft Innovation Center will comprise about 5,000 square feet, with options for expansion, and will contain tools and technology for individuals as well as physical space for for training and collaboration. It will be open to everyone, not only the 29 companies housed in Venture Hive, Akerkar said. The innovation center hopes to collaborate with universities in South Florida and has been in discussions with Florida International University, Florida Atlantic University, University of Miami, Nova Southeastern and Miami Dade College about collaborations, Akerkar said.

Said Amat, “The MIC will be a central gathering place for the tech and business community — with classes, mentoring and a full support ecosystem for both beginning developers and later stage technologists. We will have hardware for testing applications, a training area, and room for startups and support” that will enhance Venture Hive’s mission of entrepreneurship education.

One of the first projects, still in the planning stages, could be a summer program to teach 200 Miami-Dade County teachers about building apps so they could take that knowledge back to their students, Akerkar said. People using the innovation center will also have access to Microsoft’s BizSpark program, which offers free software and other tools to startups as well as access to mentors from the local community and globally.

Microsoft is no stranger to South Florida; it has had a Latin American headquarters here for two decades. From its offices in Fort Lauderdale that now employ 400 people, Microsoft oversees operations in 46 countries and territories in Latin America and the Caribbean, where it employs about 2,000 people in factories, research, sales and other operations.

Microsoft is also involved with the inaugural eMerge Americas Techweek that started Friday, and is participating in sessions next week about how cities can use technology to better connect systems, data and people. Microsoft already is working on its CityNext programs with officials in Buenos Aires, Sao Paulo and Medellin, Colombia, to make information more accessible and services more affordable, Rincon told the Sun Sentinel.

Doreen Hemlock of the Sun Sentinel contributed to this report. 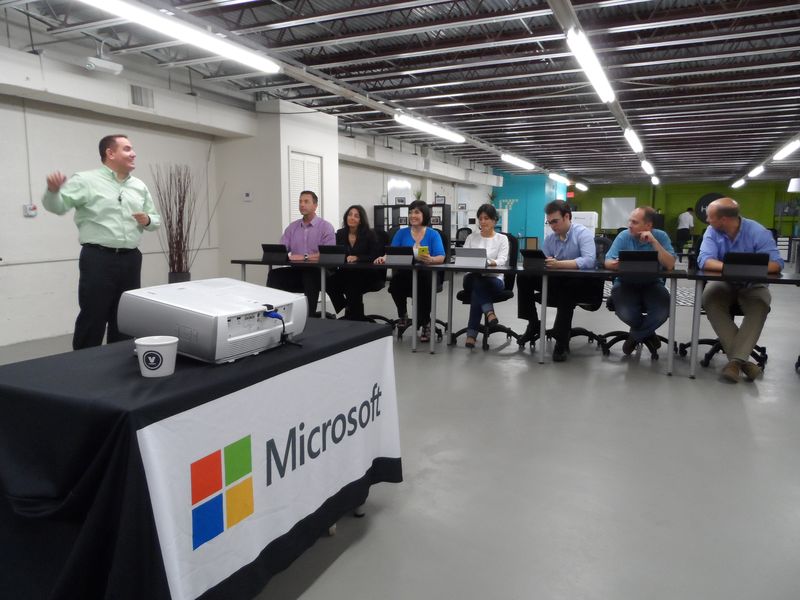 The space within Venture Hive where the new Microsoft Innovation Center will be located.

Posted by Nancy Dahlberg 05/02/2014 at 07:02 AM in Accelerators/incubators, Education, Resources | Permalink