A startup approach to keeping Lebron on the HEAT

A few hours ago Lebron James’ agent informed the Miami HEAT that his client would be opting out of the final two years of his contract with the team. Effectively making him an unrestricted free agent on July 1, and giving up the player option for the remaining two years worth about $42 million on his contract.  There is still no word from Lebron’s camp on what he really wants to do, but this got me thinking.  This is an opportunity where Lebron could be pursued with rather unconventional means.

There is a rule in the NBA owners’ guidelines/handbook that stipulates that no owner can be a player on his own team. This rule is in place to prevent Mark Cuban from taking the floor with the Mavericks on off nights, or to make the league more professional than its heyday of ABA teams. Conversely, this means no team can offer equity to a player that is currently playing, as part of a salary negotiation or means of avoiding a salary cap hit. HOWEVER, that doesn’t mean they can’t get creative about backloading a deal. So here is where my startup founder’s hat comes in to play.

Startup founders often use the promise of big exits and huge payouts as a way of incentivizing top talent to join their teams. Typically early employees in companies are given deals that include lowered salaries paired with stock options or grants. These equity deals are potentially incredibly lucrative if the companies can manage to sell to bigger companies or go public on the stock market.  Lebron is in a position to be like one of the early employees at facebook that cashed out to the tune of hundreds of millions upon the Facebook IPO. Many early Facebook staff turned down higher paying jobs in order to get more equity, those team members are now in the billionaire club, like Dustin Moskovitz and Chris Hughes. 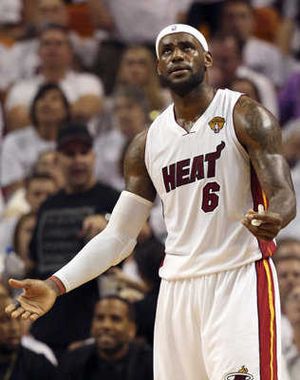 If the HEAT take on a salary cap hit this year and surpass the cap again for the fourth time in five years, they look to get a double penalty, something I’m sure they have no desire to do. So by opting out of the last two years of his contract, Lebron could restructure his contract to take in less cash to open up more cap space, therefore enabling the HEAT to free up money to attract new stars.

Lebron has an interesting opportunity in front of him, he can break ground where no one has before. He has the opportunity to redefine the player-owner-league relationship. Lebron has no financial risk (that we know of) when it comes to being able to support his family, so why not take a gamble. With the Clippers getting a $2 Billion offer, the Miami HEAT should be worth somewhere in that range as well (strong fan base, own an entire market to themselves, strong brand recognition, etc). Miami HEAT owner Mickey Arison, who purchased the team in 1995, should consider taking a startup approach to the team and offer some sort of equity-for-play deal to Lebron.

How Lebron could structure a new player-owner deal:

If he were to get say 5% on a $2 Billion franchise, that could be worth $100 Million. So assume he plays for veteran minimum over the next 8 years, that equates to roughly $40 million over those 8 years, averaged at $5M/year. Add in the $100M balloon at the end of equity, and he is looking at a $140M incentive package, equivalent to $17.5M/year over the next 8 years.

This wouldn’t be that huge of a discount over his current salary, but it would afford the HEAT $120M in cap space to work with or more, over that same time period. Assuming the team doesn’t increase in value over that period, he is assuming very little risk in the deal.

Would Mickey Arison take on a deal like this? I don’t know him, so I couldn’t tell you. However, if he thinks Lebron could bring in more championships, the value of the team could rise dramatically as well. Each additional championship the team brings in is worth upwards of $10M in additional revenue to the team according to the Sun Sentinel. If we’re looking at historic growth in team values as an indicator of future growth, the team could be worth 25-50% more by the end of Lebron’s contract, making him worth an additional $25 to $50 Million on this theoretical deal.

A few years back the LA Galaxy did another innovative deal with David Beckham in which he got rights to buy a franchise at a discounted rate and took a reduced salary, but also received a share of merchandise during his tenure in LA.  The package which was backloaded eventually was worth tens of millions more, due to the growth in popularity of the MLS.

So should the HEAT pull off a deal like this, and use it to stack the team for the next decade?

Brian Breslin is the founder ofRefresh Miami,Infinimedia andMaker Market. Brian is best known his work with Refresh Miami, which has held 100+ meetups and events with over 8,000 members strong is the largest technology networking organization in South Florida. Brian has been recognized as a “Top 20 under 40 business leader” and “Power 30 under 30” for Miami.