Do I stay or do I sell? An entrepreneur, a reality show and a new direction 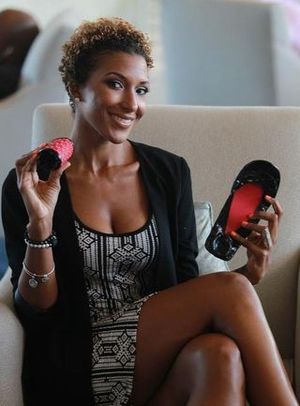 The startup life is crazy.

Dawn Dickson, the Miami Beach founder of Flat Out of Heels, knows all about that.

You may remember that Dickson runs a company that sells “emergency flats” online and out of vending machines, and the machines are strategically placed – shopping districts, airports, even nightclubs – to offer women relief from their heels. She has also developed a sister business for the specialized vending machines. Sales were steadily growing, but as any product entrepreneur can relate to, she needed capital to  produce the large orders. This spring she was all set to sell her company to a retail partner. As part of the deal, she would stay on as CEO for two years and continue building the Flat Out of Heels brand.

But things can change in an instant.

In early May, she was invited to film a CNBC episode of “The Biz Fix“ with “The Profit’s”  Marcus Lemonis. In the reality show, Lemonis advised her not to sell; he said it was too early. He told her he thought she had a good idea going and she should play it out. He also advised her to look for investors who can offer her more than money.

The week of the filming was the same week she was supposed to close. She took his advice and canceled the deal.

Since the filming in early May and the segment that was released Friday, Dickson says she feels good about her decision and has fielded investor interest. “I was selling because I really needed capital, and I still do, but back then I didn't have any other options. I have a lot more opportunities now.”

Her challenge now? “What money do I take because like Marcus said I need to only give equity to people who can bring more than cash to the table. I need a strategic partner who can come in and work and help me grow the business - a person who has relationships to bring in immediate sales.”

So now she is back to raising capital and the crazy startup life.