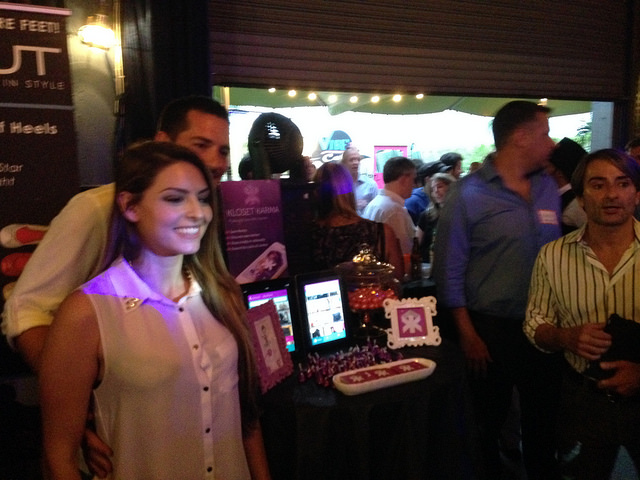 Kloset Karma was presented at a Tech Cocktail event at The Stage in Miami's Design District. Credit: Michael D. Bolden.

Two local startups will get the chance to pitch their businesses to other entrepreneurs and investors at Tech Cocktail Celebration, a national competition Oct. 9-10 in Las Vegas, after winning a showcase at The Stage in the Miami Design District Tuesday night.

Both of the businesses capitalize on needs in women’s fashion. Flat Out of Heels offers a wearable solution for women with stiletto-sore feet while Kloset Karma, a mobile app, puts unused clothing from the back of closets into circulation.

The two companies were selected from seven startups during a Tech Cocktail Miami mixer and showcase. Thanks to Knight Foundation support, this is the inaugural year in Miami for Tech Cocktail, a national media and events company that provides resources for startups, entrepreneurs and technology enthusiasts.

“We meet women when their feet hurt the most,” said Flat Out CEO and founder Dawn Dickson during a 60-second pitch. “Flat Outs are sold online and in vending machines in the Atlanta Airport and in the restroom in Club LIV.”

While Flat Out of Heels was voted the winner by people attending the showcase, Kloset Karma won an online pre-event Reader’s Choice Award.

The Kloset Karma service allows fashonistas to exchange outfits they no longer want for “Karma Points,” which they can redeem for outfits from other users nearby. “Kloset Karma works because it’s taking an existing habit between girlfriends and expanding it to the community and national level,” co-founder Paula Celestino said.

Read the full post on the Knight blog here.

Carolina Wilson is an editorial intern at Knight Foundation.

See former coverage of Flat Out of Heels here and here.