Gapingvoid: The art business with a purpose 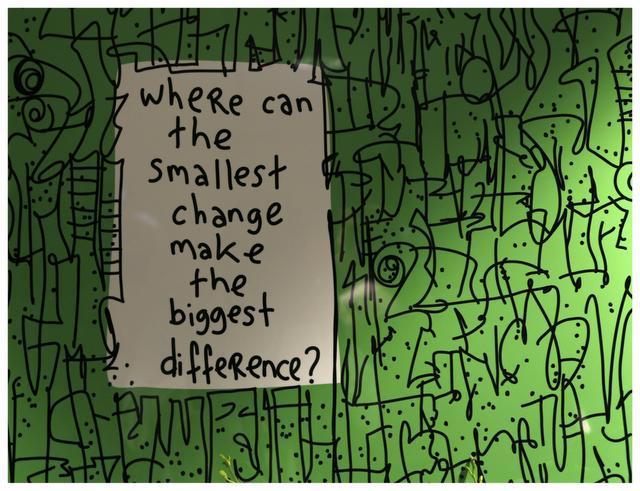 An example of Hugh MacLeod's work at Gapingvoid here and below. 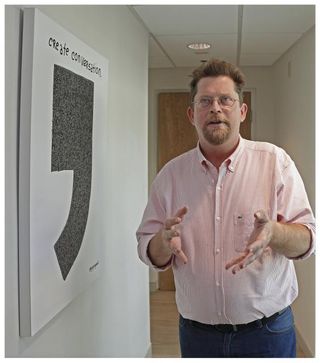 When cartoonist Hugh MacLeod arrived in New York City in 1997, he checked into the YMCA with two suitcases, a couple of boxes and a copywriting job at an advertising firm. His only canvases were a handful of blank business cards in his pocket.

His business-card doodles, made during long nights in local bars, sought to capture “the intensity, the fleeting nature, the everlasting song of New York.”

Ten thousand cards later, his doodles have morphed into the colorful messages of inspiration that built Gapingvoid, the Miami office art business that has decorated the walls at Intel, Microsoft, The LAB Miami and the University of Miami. This year, it’s slated to rake in $7 million in revenues.

“It’s a great juxtaposition of using a cartoon and modern art to say all these powerful statements that are very universal,” said Maria Tomaino, UM Toppel Career Center’s associate director of events and marketing who worked to bring Gapingvoid to the center. “It’s like saying a lot without saying too much.”

Some of MacLeod’s art features abstract doodles, intricate scrawls of lines and circles, or his signature caricature monsters. All include a thought-provoking line about business, success, passion, hard work and culture:

“Only talented people fret about mediocrity.”

Today, Gapingvoid art can be found in large and small corporations around the globe. But in 2001, it was just a blog.

MacLeod posted his business-card art on his business motivation blog, gapingvoid.com, and started to gain a following. Today the blog has about 120,000 unique visitors a month, according to analytics supplied by Gapingvoid.

One of his fans was Jason Korman, the man who would become Gapingvoid’s CEO. Korman owned a South African winery, Stormhoek, and reached out to MacLeod in late 2004 to market and brand his products in a creative way.

“What I saw with Hugh’s work was that it really connected people in unexpected ways,” Korman said.

MacLeod’s simple but profound images, mostly drawings in pen on white backgrounds, captured the soul and wit of Korman’s business and relayed it to potential customers in a graphic and understandable way.

“They are fun and they are simple, but I’m also trying to make work that’s deep and use it as a tool that has deep results,” MacLeod said. “I like a piece of art with a delayed fuse. You think about it the next day, and suddenly you get it.”

MacLeod’s blog started to make ripples in the technology world and to circulate at “geek” dinners. Eventually, it reached the ears of Microsoft. The Microsoft employees he met all shared a passion to change the world. They inspired his “blue monster” in 2006 — a pointy-eared, sharp-toothed take on the ambiguous demonic drive that fuels innovation. The tag line: “Change the world or go home.”

Steve Clayton, chief storyteller at Microsoft, said via a video posted on MacLeod’s blog that after the “blue monster” was created, he had seen employees putting the image on their walls and on their desks.

“I hope it snowballs into something that really captures the essence of what it is, which is, ‘let’s go out there and talk about the great stuff we do,’ ” he said in 2006. “Let’s not be shy about the fantastic ways we can impact people’s lives and, in small ways, change the world.”

Its “blue monster” did just that.

“It was a great kind of rallying call and social object for us,” Clayton said. “It galvanized a group of people to talk about the work Microsoft was doing.

“That’s really the magic of Hugh: He can say an enormous amount in less than a tweet.”

Today, Clayton said, he continues to see MacLeod’s cartoons passed around and hung on walls.

“I think what’s great to see [that] in this age of a constantly changing world of social media, Hugh’s work is timeless,” Clayton said. “Anybody who’s anybody on the web knows Hugh MacLeod and his cartoons.”

After the success of the “blue monster,” Microsoft commissioned more work, and continued to do so. And MacLeod’s name became well-known in the corporate world.

“We were trying to create these office grenades that just ignite inside the corridors and brighten the place up and articulate something meaningful and something important,” MacLeod said.

When Korman sold Stormhoek in 2008, he and MacLeod looked into making the cartoons into a viable business. They tested the waters by posting one of MacLeod’s prints on gapingvoid.com and advertising a limited quantity on a first-come, first-served basis.

“We had a quick dinner, came back, and the entire thing was subscribed,” he said.

‘IF IN DOUBT, BEGIN’

At face value, Gapingvoid is an art business. But it seeks to go deeper to address the communication issues that occur in companies where employees are often disconnected from the outcome of their work. The business consultants work individually with each business’s employees to produce art that best suits its needs. And clients are asked: Why do you do what you do?

“If you tell me what matters to you as a business and what you want people to believe in, we can put that up on the wall where every day, people know what’s expected,” Korman said.

He said that he and his staff talk to employees about the issues they have and then create a space that is conducive to talking about those issues.

The images on the wall create a conversation. Employees pass the images around, put them on their desks, talk to each other about the messages, and create a conduit to talk about subjects that are difficult to discuss.

Korman likened it to communication in a personal relationship. In the corporate equivalent of date night, neither employees nor the employer are talking at the dinner table. “We are kind of like there at the dinner table, feeding lines,” he said.

The goal: to help employees regain their passion and translate that into a better product, improving both the work environment and the business itself.

At the new North Miami offices of the Physicians Group of South Florida, a survey on the artworks’ impact on the staff before and after a 20-piece installation in April found that the art improved the overall positive mood of the office, the workers’ motivation, and even the patients’ mood.

“The overwhelming majority of patients like the art,” Dr. Jason Radick said. “They have a good experience — from the waiting room, to the scale, where they don’t usually have good experiences, to the consultation, to the checkout.”

Deciphering the best way to reignite a business hasn’t always been easy.

The challenge, Korman said, is in taking the naive feel of cartoons and making them a powerful rallying cry for a corporate business. Simplicity, the key behind each of MacLeod’s drawings, is often difficult to achieve when addressing complex issues.

Korman said it’s often difficult to persuade a business that an image, and the concept behind it, could positively affect its work environment.

“Nobody has any expectations about cartoons,” MacLeod said. “They don’t expect to have their lives changed by them, so when it does happen, they are delighted.”

Among those delighted have been the staff at Paris-based Havas, one of the world’s largest advertising agencies.

About 1,100 works — Gapingvoid’s largest installation — were placed on the glass partitions around hundreds of conference rooms at Havas’ new headquarters in 2012. “It absolutely changed the environment,” Jones said. “It helped convey that we were very keen to be an entrepreneurial, innovative, fast-moving and creative company. It was a strong statement of the desired culture at Havas.”

Other corporate giants that have been smitten by Gapingvoid’s vision have been Intel, Volkswagen, Rackspace, Cisco and Hubspot.

The self-funded business now works out of Korman’s house on Hibiscus Island, where Gapingvoid art covers the walls.

It has grown from $600,000 in revenue in 2009 to the projected $7 million in 2014, figures derived primarily from licensing contracts, Korman said. It has developed art for about 300 companies, including about 50 large corporations.

Gapingvoid’s work can be seen in offices scattered across the world. Gapingvoid has also created limited-edition prints for Dewar’s Whiskey in Miami. The business employs eight Miami employees and seven others around the country.

Most prints are 11-by-14 inches and priced in the hundreds of dollars; 16-by-20-inch pieces sell for about $1,000 each, and larger prints are in the $8,000 and $9,000 range. Caricatures on paper are printed at Gapingvoid’s Hibiscus Island location; aluminum prints are printed in California and shipped to clients.

MacLeod still draws cartoons, about six to 12 a day, on his business-card canvases.

“It’s just a question of pushing myself more on quantity and quality,” he said. “There’s always something wrong with humanity, and business is an expedient way of fixing that.”

Last month, about 200 guests turned up at UM’s Toppel Career Center to meet MacLeod and Korman and tour the center’s 80-piece installation.

Executive Director Christian Garcia said that for the students and employers who come to the center, the walls — with Gapingvoid art on them — serve as a museum, a motivator, and even a coach for students facing employers in interview rooms.

On any given day, one can tune in to conversation centered on one of the works, Garcia said.

“I have folks who will come to the career center just to walk around because they have time on their hands,” he said. “They just want to be inspired.”

It’s this desire to find inspiration in work that MacLeod had hoped to capture in his art — at a time when he couldn’t find it in his own working life — and to share it with others.

“At the end of the day, we all want to know that we matter and that we love what we do and we are not wasting time,” MacLeod said. “And that’s what my art is about, and that’s what everyone’s careers should be about.”

Product uses: Art for the workplace and other internal uses, marketing campaigns and advertising. Businesses can commission new pieces to fit their needs or choose from more than 10,000 existing pieces. Gapingvoid will work with businesses on an individual basis to curate art that will best suit or improve the workplace. 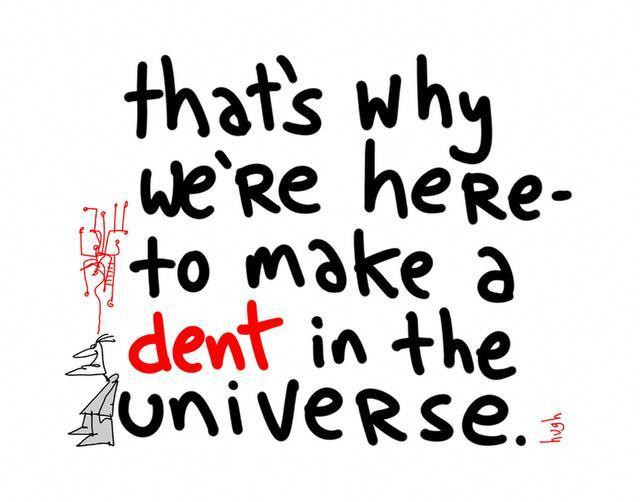