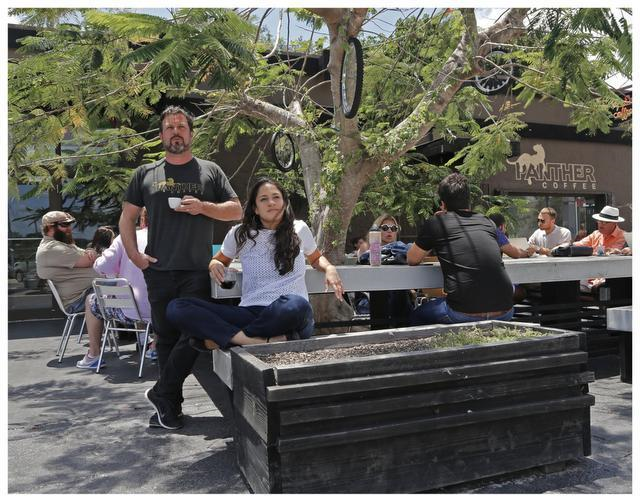 Special to the Miami Herald

A few times a week, marketing and technology consultant Juan Zalduondo takes a break from working at home to head over to bustling Panther Coffee for a java fix, as he has done for the past three years. Friendly baristas greet him, and rock music plays as he strolls past artists and business professionals sipping creamy chocolate East Coast espressos, perhaps, or a simple cup of fragrant freshly brewed coffee.

On this day, Zalduondo, 35, was picking up a half-pound bag of the shop’s freshly roasted espresso to prepare at home; a half-pound of it is about $10. “It is probably my favorite place,” he said of the shop at 2390 NW Second Ave. in Wynwood. “The owners seem to love their craft. The coffee is excellent, and the vibe is good.”

At Panther Coffee, customers can select a bean for a coffee drink and then a method of brewing: French press, Clever dripper, Chemex, Japanese Hario V60 or glass siphon vacuum pot. Customers can also get a cup of ready-brew, which is the coffee of the day brewed on a Fetco Extractor commercial brewer. The shop also creates three espresso blends: light and fruity West Coast, creamy chocolate East Coast and its original Legacy. Prices range from $2 for an eight-ounce cup of ready-brew coffee to $6 for a 12-ounce cup of vacuum pot brewed coffee.

The variety of coffee is what attracted 32-year-old chef Henry Hane to stop by Panther Coffee when he visits the Wynwood neighborhood. “I heard about it and thought it was pretty cool,” said Hane, who usually drinks an East Coast espresso or almond iced latte. “It is a different take on coffee.”

In the three years since it was founded, Panther has become a major player in the craft-coffee world — not only in Miami, but nationwide. It has, for example, been mentioned in national media, including some televised American Express ads. This year, Panther also received honors for producing some of the region’s best craft coffee products. And while the company does not disclose its revenues, Panther is leaping forward with plans to open two more locations within the next year, and it has doubled the number of employees it had a year ago.

Panther is the brainchild of Traverse City, Mich., native Joel Pollock, 42, and his wife, Leticia Ramos Pollock, 29, who hails from Taubate, Brazil. Both had careers in the coffee industry — Leticia was a coffee educator at a Brazilian company, and Joel worked at an import/export coffee company in Portland, Oregon — when they first met. That was in May 2008, at a sweet spot for both: the Specialty Coffee Association of America convention in Minneapolis. There, coincidentally, Leticia was offered a job in Portland as a coffee educator.

“We really had a lot in common,” Leticia said. “It was a love-at-first-sight type of thing.” The couple married five months later. They now have a 2-year-old daughter, Luciana.

Joel had started in the restaurant industry at age 14 as a dishwasher. He got his first taste of the professional coffee world during his first year at the University of Montana, where he studied human geography. He was a barista and coffee roaster, among other things, at a small roasting company.

“I learned from the ground up,” he said. “There are a lot of details to pay attention to when delivering a high-quality, great-tasting product. You must gain the skills and knowledge along the way to bring out the best flavors in the coffee.”

Leticia had become interested in the field after studying specialty foods and wines in college at SENAC, a university in São Paulo. “That is when I began falling in love with coffee,” she said. While in college, she worked for a distributor of Italian expresso makers, showing restaurants, coffee shops and other clients how to use the machines.

After Leticia moved to Portland, the couple began talking about starting their own coffee company. So they crafted a business plan and began purchasing or trading services for the equipment they would need. Then they looked for a city in which to start their business, choosing Miami after a vacation — and finding no coffee-roasting scene here.

“There was no specialty coffee company,” Leticia said of Miami. “No one was doing coffee the way we do it.”

So they moved east, signing a lease for their new shop. Joel sold his motorcycle, and the couple gathered up their savings before heading out in a moving truck containing their belongings and their roasters, an espresso machine and coffee brewing equipment. At first, they struggled financially, unable to pay the rent; fortunately, their landlord was the late Tony Goldman, the visionary real-estate developer who revitalized Wynwood, as he had done with South Beach and Manhattan’s SoHo neighborhood. He gave the couple a reprieve on their rent — and also gave them a loan to help them launch.

The first pieces of equipment the Pollocks bought for their shop were a pair of German-cast iron Probat Perfekt Roasters made in 1927. They bought them in 2009 from a friend’s coffee-roasting business in Seattle. The manually controlled machines make it easy to control temperatures at will for roasting techniques, Joel said, adding that the only ones like them are in a museum in Emmerich, Germany. (The Pollocks wouldn’t say what they paid for the roasters.)

At Panther, Joel oversees the roasting processes and also handles service to wholesale customers; Leticia runs retail operations and staffing. The shop’s name was chosen after the Pollocks noticed several trucks with animal branding during their trips to Brazil. “I just got a little animal that was simple and memorable,” said Joel, adding that his cousin and freelance artist Benji Andrews, of Lansing, Mich., drew the panther logo.

Coffee-lovers in the Wynwood shop can see the antique 22-kilo Probat Perfekt Roaster in action while sipping their drinks and munching on fresh-baked goods. They can also catch some sun in the ample outside seating area, where communal long tables and colorful chairs make it easy to strike up a conversation with your neighbor. Rope-tied tires dangle from trees, another touch of informality.

Bags of single-origin green or unroasted raw coffee beans on which the names of farms in Central and South America and Africa are printed are piled near the roaster and at Panther’s nearby warehouse. The selection of beans changes seasonally, and the Pollocks buy directly from the farmers — they’ve built the relationships during the half-dozen or so visits they take each year to El Salvador, Nicaragua, Brazil, Colombia and elsewhere. The couple then handles the export arrangements, or they pick up the coffee from a consolidated coffee importer that ships to the United States.

At first, Panther Coffee purchased nearly 400 pounds of coffee monthly. The Pollocks declined to disclose how much coffee is bought monthly now, except to say that 40,000 pounds of coffee were recently shipped from Brazil and that the company now receives new shipments every two weeks.

Panther Coffee not only sells its coffee within its shops — last year, a second location was opened at 1875 Purdy Ave. in Miami Beach — but also to other retailers such as Michael’s Genuine Food & Drink, Whole Foods, Epicure and the Root Cellar at the Miami Culinary Institute. The business has 50 active wholesale accounts in New Orleans, New York City, Boston, Portland, Delray Beach, Fort Lauderdale and Miami. It also has customers in London and Toronto.

Panther’s growth points toward a trend of consumer awareness of coffees from different origins, regions and farms that makes consumers eager for variety, said Joseph DeRupo, spokesman for the National Coffee Association of U.S.A.

“There is plenty of room in the marketplace for an independent micro roaster coffee shop because they will offer their own individual artisan take on the product that will develop a following of people,” DeRupo said. “It enables companies like Panther to find a place in the marketplace and obviously succeed.”

For the past two years, Panther Coffee has received the Good Food Award for its coffees. The award is given by the Seedlings Projects, a California nonprofit that supports the sustainable food movement. This year, the shop won for its Ethiopian Chelba and Nicaraguan Kailash, and last year for its Colombian Finca El Ventilador coffee. The national awards celebrate producers of tasty, authentic and responsibly produced foods, according to the organization.

Another sign of its rising national prominence: Panther Coffee has been mentioned in the New York Times and was featured in American Express commercials during the 2012 Academy Awards and the 2013 Miami Heat Finals games.

There are also plans to open two new locations within the next year. The Pollocks purchased a 3,000-square-foot building for a warehouse and coffee shop that will open in six months. The single-story building is at 5934 NW Second Ave. in Little Haiti. The location will also house the Pollocks’ other Probat Perfekt Roaster — twice as large as the one in Wynwood.

“The experience of witnessing the roasting process will be a big visual component of the shop,” Joel said.

A fourth location will also open in about 10 months at 6405 Biscayne Blvd., where a strip mall is currently being built.

With such a quick growth spurt, the Pollocks said it was challenging to stay organized and build a team to consistently maintain the quality of the coffee. “We have a very specific hands-on approach,” Joel said. “As you grow your company, you see that you can’t be in 19 places at one time. You have to learn to communicate with people what’s needed and the art of letting go. Not being involved with everything.”

The Pollocks also continue to educate themselves. They were recently accepted to the Goldman Sachs 10,000 Small Businesses program at Miami Dade College, which gives entrepreneurs skills to grow their business, opportunities to access financial capital and network.

Overall, Joel said, the company’s growth has been a “humbling experience.”

“We were surprised to find that here in South Florida there was a big desire to find high-quality specialty coffees,” he said.

“We expected to be a little small coffee shop with a roastery and to stay in our niche. Selling our coffee to pay our rent and having a cute family business.” 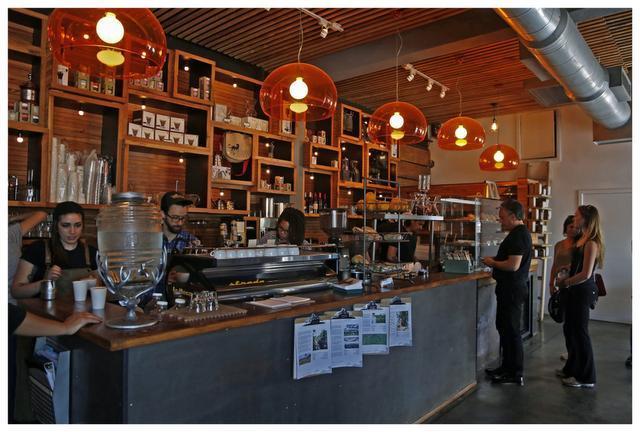