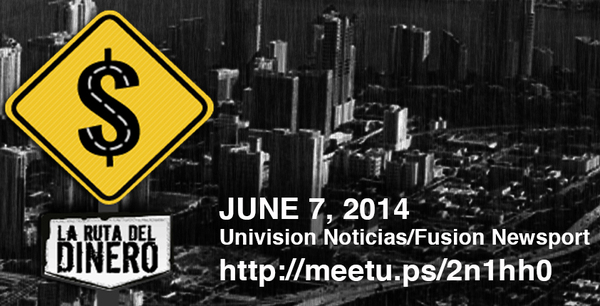 This Saturday,  journalists, developers and designers are invited to take part in a simultaneous 14-city civic hackathon, with projects aimed at tracing the transnational flows of money across Latin America and into the U.S.

"Hacks/Hackers is a global mashup of journalists, coders, developers and designers, and this is the first time that the Latin America chapters are coming together in a massive simultaneous hackathon. The theme of the hackathon is the la ruta del dinero, or the money trail. With money and people from Latin America flowing continually through Miami, it makes sense we'd be the one U.S. city taking part in this pan-hemispheric event," said journalist Dan Grech, co-founder of the Miami chapter of Hacks/Hackers and one of the organizers of the event.

As the organizers say, there will be no sweaty overnight coding at this hackaton. It’s from 9 to 5 and will includecool people with lots of different skills tackling an interesting and important problem.