« Another craft beer business joins Wynwood scene | Main | From Startup Weekend to DemoDay -- all in a week! » 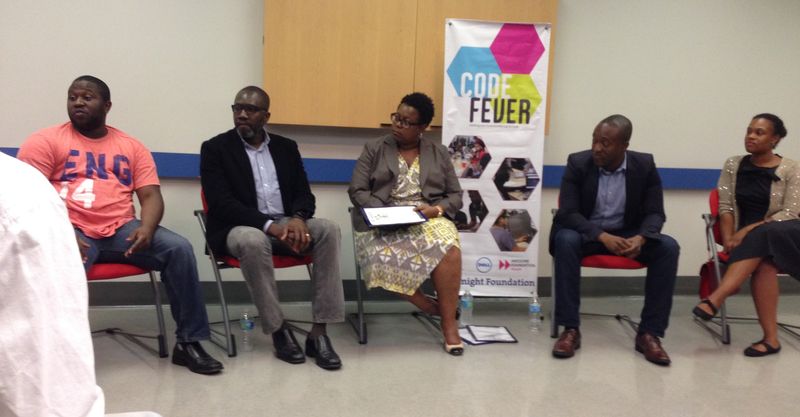 Felecia Hatcher, co-founder of Feverish Pops and Code Fever, said she was inspired to hold a community conversation about diversity and inclusion after Google released its numbers showing just 2 percent of its workforce is black, and the numbers of other big Silicon Valley tech companies showed a similar trend. That's one characteristic of Silicon Valley that Miami does NOT want to emulate as the  South Florida works to develop as a tech hub and strong entrepreneurial ecosystem.

So this week, she convened a panel of entrepreneurial startup leaders and invited the public to the Meek Entrepreneurial Education Center at Miami Dade College to discuss "Creating an Inclusive Technology Ecosystem in Miami." "I think this is the first time we've had this kind of topic in South Florida," Hatcher said. "That's good and bad, considering what's been happening for the last couple of years in Miami. We're definitely going to continue this conversation."

Some of those alarming numbers at Google can be explained by the places that these companies do their recruiting -- Stanford and the Ivy Leagues and perhaps awareness is growing to widen the net, particularly to Historically Black Colleges and Universities. "We're entitled to a fair chance," said Pearson.

Yet,  the conversation also circled around improving education in technology here, not only for secondary school kids but for adults as well. Toney pointed out that the Creative Entrepreneurship Studio at the Meek Center offers certificate programs in entrepreneurship, engineering and graphic design. There is also an incubator opening for MDC students on the Wolfson campus. Others pointed out that there are a wealth of free online course available from Code Academy, as well as MIT, Stanford and others that people can take advantage of. Hatcher said Code Fever, which offers coding programming for middle and high school students, may launch  some programming for adults.

Another theme was mentorship and the need for shining a light role models in the black community. Andrew McNeil has started a series on YouTube to try to do just that. Still, there is a gap between people who want to mentor and people who need it that needs to be filled, the panelists said, and it's also critical to combat the region-wide problem of brain drain in South Florida.   "Be a mentor, it's like going to church or visiting your grandma -- we have to build this into our culture," said Benjamin.

Resources are growing every day but a lot of people don't know about them.  The Miami Dade Economic Advocacy Trust recently  funded 10 entrepreneurs to be members of The LAB Miami and also helped bring Black Girls Code to Miami, Toney said. Gibson said her company, Ecotech, is opening an incubator and is already helping eco-friendly product companies develop. But it's also about taking the initiative:  "You have to get out of your comfort zone," said Quarrie.

A few resources that were mentioned:

Awesome Foundation awards $1,000 grants for good ideas that help the community. For instance a program to teach rasperry pi to adults was one of the recent grant recipients. Find out more here and apply.

Refresh Miami, South Florida's largest tech entrepreneurship meetup group, holds events every month, and this summer is holding a series geared to startup issues. Refreshmiami.com also has a community events calendar as well as a jobs board on its site.

What's on the MENU? is a new series for entrepreneurship education and networking. Some sessions are held at the Miami Dade College North Campus and some at the Meek Center; some are held in the evening, some in the morning to fit lots of schedules. Call lead coordinator Daniela Pierre at 237-1522 or find information on Twitter @MDCMENU. The next meetup is Aug. 14 at 6:30 p.m.

The Knight Foundation's Miami program director, Matt Haggman, holds a monthly breakfast. It's a good opportunity to not only hear about what the Knight Foundation is up to but also to share information on your own projects and challenges.