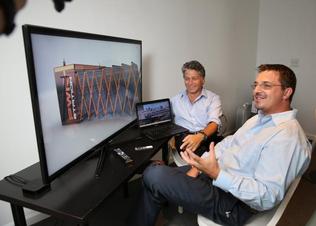 Story: Co-founders Robert Albertella and Ludovic Roche saw an opportunity to “mass manufacture” pre-assembled, fully-integrated solar power delivery systems in a global sector characterized by costly custom installations. For the clean-tech startup, “our vision is to bring simplicity, accessibility and price competitiveness to residential and non-residential solar customers around the world,” said Roche, who has 15 years’ experience in business development and marketing, including as a senior vice president at Blumberg Capital Partners.

Financing: PWRstation completed an initial round of financing last year and currently seeking a second round for $2 million to fund operations and growth.

Recent milestones reached: PWRStation has recently finalized a production agreement and finalizing a distribution agreement with Schletter, a leading global solar manufacturer. Recently joined by William Berenson, a highly experienced global marketing and communications professional. PWRstation 3.3 kWp about to complete UL2703 Issue Two Standard certification for U.S. market. Recently featured at the Intersolar Conference in Munich, where PWRStation received accolades and requests for distribution rights in Europe, the Middle East and South Africa. Also exhibited at this month’s Intersolar North America Conference. PWRstations will be available within the next three months in South Africa and surrounding countries, Roche said.

Biggest startup challenge: “As a solar company that has chosen to make its headquarters in Miami, our biggest challenge to date has been to gain the same traction in our state as we have experienced elsewhere, simply because Florida is a state unfriendly to solar,” Roche said.

Next step: Revamping/re-launching brand; Completing second round of financing to ramp up operations and distribution alliances in the U.S. and EMEA.

Strategy for next step: Complete and execute a global promotion with one of the world’s largest NGOs based in Geneva, Switzerland.

Mentor’s view: Kim Perry, an investment banker who works in London and lives in Switzerland, was attracted to PWRstation’s business model and social mission: “In the developed world, there is need for portable devices that can be transported and deployed (and folded up) easily as is the case with PWRStation. Examples include the military, emergency services and situations where severe weather conditions, such as heavy snowfall. Additionally, even for more static environments, the PWRstation device has merit because the installation costs are minimal.

“There are approximately 1.5 billion people in world who are off-grid (not connected to the electric grid). The World Bank has estimated that 70 percent of Africans are off grid and Africa spends about $10.5 billion per year on low-quality fuel based lighting such as kerosene. A PWRstation in every village would provide clean low cost electricity to the neediest and allow, for example, children to read at night and hence progress far more than they otherwise could do,” Perry said. “And PWRstation’s business model is one that allows the company to scale up quickly on a global basis.”