Survey: Miami gets a C for business friendliness. 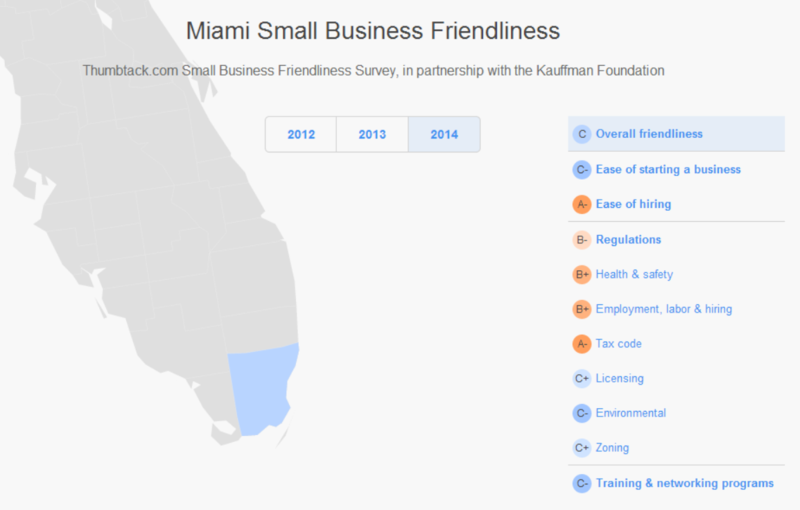 South Florida's small business owners see plenty of room for improvement in their local government, according to a survey released by Thumbtack.com, in partnership with the Kauffman Foundation. Miami earned a C for overall friendliness. Its neighbors to the north? Fort Lauderdale received a D+ and West Palm Beach earned an A-.

More than 12,000 entrepreneurs nationwide in 82 cities and most states participated in this year’s survey. “The data show that Miami rates in the middle of the pack for friendliness towards small businesses,” said Jon Lieber, chief economist of Thumbtack.com. “Creating a business climate that is welcoming to small, dynamic businesses is more important than ever, and Miami has a ways to go to achieve this goal.”

Some other key findings:

The full survey results can be seen here.

So how do we compare? In Florida, for their overall friendliness: Orlando (A), Jacksonville (B-), Tampa (C+), Cape Coral (C-), Port St. Lucie (C-). Nationwide, the top rated cities overall were Colorado Springs, Boise, Houston, Austin, and Louisville. The lowest rated were Sacramento, Providence, Buffalo, Bridgeport, and San Diego.

Posted by Nancy Dahlberg 07/15/2014 at 10:00 AM in Entrepreneurship research, Small Business | Permalink