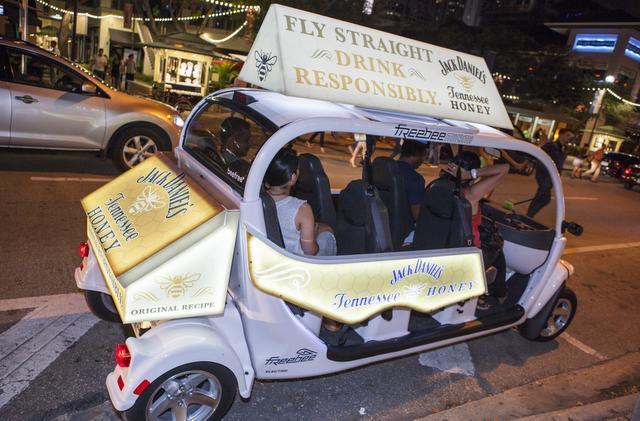 BY CAITLIN GRANFIELD, SPECIAL TO THE MIAMI HERALD

A free transportation service that has been running in Miami Beach for two years is now operating in Brickell and Downtown Miami.

Freebees are electric, open-air vehicles resembling oversized golf carts. They give free rides to people along designated routes in popular high traffic areas. They’re outfitted with mini HD TV’s and audio systems. Riders often are offered discounts and “freebees,” sponsored by the advertising company that pays to outfit the vehicle and promote their brand. And Freebees light up, so they’re easy to see and flag down, even at night.

Unsatisfied with their “real” jobs after graduating from University of Miami, business majors and campus roommates Jason Spiegel, 27, and Kris Kimball, 28, put their heads together and came up with Freebee.

Once they signed on advertisers, the costs of outsourcing “wrap” ads on the vehicles, outfitting them completely to represent the brand of the client, reached such a high overhead that they incorporated graphic designer, Amir Youssef, 37, as their business partner to do it in-house.

The trio established Beefree Media, a creative campaign agency that specializes in servicing media buying and printing, ranging from fliers to billboards and everything in between, including car wraps. Their headquarters is based in a warehouse in Wynwood, which is where they also print the vehicle wraps for Freebees.

Miami Mayor Tomás Regalado cut the ribbon at Mary Brickell Village on Aug. 1 to welcome Freebee to the neighborhood and to celebrate their official launch. “It’s important for Miami – the only complaint we have about Downtown and Brickell is the transit. So now with the trolleys and especially with the Freebees we will be able to move Brickell, Downtown and the Omni in a very good way and cool way for the future. Miami is going green.”

The fleet of 20 vehicles are 100 percent electric and can hold up to five passengers, plus the driver. Monkey Shuttle was a similar company that also provided free rides in Brickell and Downtown Miami, but it has since closed and had only operated with a few vehicles.

Linnea Rae, a spokeswoman for Freebee, says she and her team have been so focused on representing their advertising clients – Vita Coco, Yardhouse and the Clevelander and Downtown Development Authority are some, “that we never really promoted our own company.” She’s marketing the company more actively so that people can distinguish Freebee from other ride-sharing services, such as Uber, Lyft and taxis, noting that short-distance travel and the “fun experience” are what makes them stand out.

Multiple calls to Miami Yellow Cab for comment yielded a voicemail saying to call back again. After calling Alton Road-based Central Cab on Friday at 3:30 p.m., I was told the director and supervisor had left for the day. Calls to Lyft for comment also went unanswered.

Since each vehicle is dressed to promote the brand and product of each client exclusively, riders are usually given goodies, such as free coconut water from Vita Coco, $5 coupons from YardHouse and “free shot” vouchers from Clevelander, adding to the fun experience for people. The drivers serve as brand ambassadors for the advertiser. In the Jack Daniels’ wrapped Freebee, mini HD TV’s show how to make different cocktails using their Tennessee Honey liqueur, since they’re also one of the sponsors.

Drivers of Freebee’s pick up passengers who wave them down along designated service areas and drop them off where they please along the route. The drivers are technically volunteers, but often “make more than a server” according to Rae, because of the tips they receive from passengers. People tip whatever they want, if they choose to at all. Celebrities like Floyd Mayweather, Jamie Foxx, Dwayne Wade, Alonzo Mourning and DJ Irie have shared photos on social media networks of themselves riding Freebee’s, generating buzz from people online.

Freebee services Miami Beach from First to 45th Street and from Purdy Avenue to Ocean Drive. In Downtown Miami and Brickell, Freebee runs from Southwest 15th Road to Northeast 16th St. and from Northwest Second Avenue to Biscayne Bay, providing service initially from 11:00 a.m. to 8 p.m., with extended service hours from 11 a.m. to midnight Thursday through Saturday.