Internet serial entrepreneurs: Been there, done that, doing it again 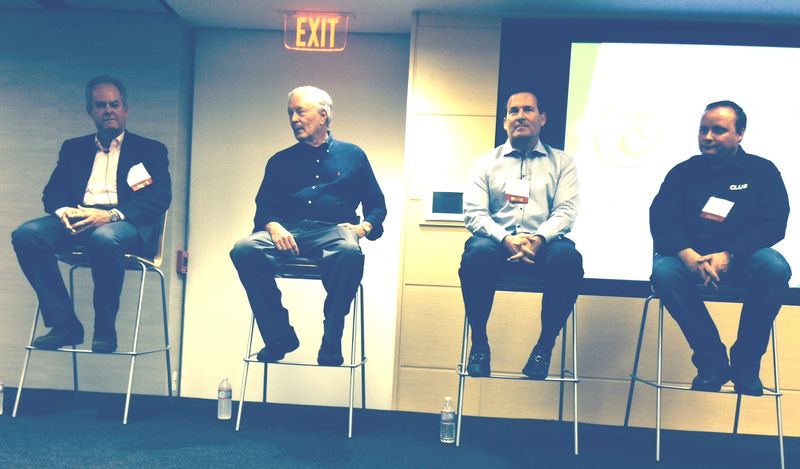 Many people may  know that the IBM PC was born in Boca but may not be aware that one of the first smartphones was developed right here in South Florida, said Chris Fleck, vice president of Mobility Solutions at Citrix. And  some may also not know that South Florida has a number of Web pioneers. Last night, for a South Florida Technology Alliance standing-room only event at Citrix to celebrate the 20th birthday of the Web, Fleck brought together four South Florida entrepreneurs who helped to build the web -- and are still innovating and giving back through new projects, mentorship and investing in South Florida startups.

Speakers included Scott Adams, who co-founded the highly successful web hosting company Hiway Technologies and is now deeply involved with two mobile health and safety companies:  he's chairman of MobileHelp, now with 120 employees and No. 111 on this year's Forbes list of fastest growing companies,  and also  CEO of GroupCare Technologies, somewhat similar to MobileHelp but with a keen focus on Alzheimer's and Autism.   Entrepreneurship and education are this FAU alum’s passions, and over the years he has been a huge contributor to the FAU entrepreneurship programs. Now Adams is also helping with the development of Tech Runway, the university’s new accelerator and comprehensive entrepreneurial education program rolling out now.

Manny Medina, whose founded and sold Terramark, said he didn’t create the NAP of the Americas, the industry did. Either way, today the NAP hosts the access points for 180 major carriers, serving Latin America and much of the world. Now Medina’s "day job" is chairman of Medina Capital that has invested in growth stage tech companies such as the fast-growing cyber-security player Easy Solutions. And his night job? Founding and overseeing eMerge Americas, which produced its first tech conference in May and has a larger mission of helping develop a tech hub for the Americas here. A team of 18 is hard at work on the next conference, with a goal of attracting 10.000+. “It’s very important that this is a regional effort -- Miami-Dade, Broward and Palm Beach. Next year is going to be unbelievable,” Medina said.

After a few months working on a farm, Colin Campbell founded, grew and sold what quickly became the largest Internet service provider in Canada in the ‘90s. Then he co-founded a number of other tech companies, including Hostopia. Campbell, who said he has been inspired by Geoffrey Moore's writings on paradigm shifts, is  back on the ground floor in another kind of Internet gold rush: domain names. Campbell’s got a powerful one: .Club, and his Fort Lauderdale company is quickly gaining traction globally.

Mike Levy said he was moved to start Sportsline, later CBS Sportsline, when he saw the early interest in consumer sites like AOL and Prodigy and thought why now apply that to fantasy sports. Levy is investing in and advising several companies, Levy said, and one of the startups he is working on is Glip, a Boca Raton-based business messaging platform with built-in productivity tools. If you want to know about the future, don’t ask me, ask him,” pointing to Glip’s Peter Pezaris in the audience. Pezaris is CEO of the fast-growing startup that already has thousands of companies using the tool. And Pezaris and his co-founders have started and successfully exited other companies together.

The four reminisced and shared war stories -- it was interesting to hear how all their careers intertwined in the '90s and how those connections continue today.