With a mission of creating jobs that make both business and environmental sense, EcoTech Visions announced it received $172,000 in grants. That brings the nonprofit closer to its goal of hatching an incubator in Liberty City for green manufacturing small businesses. 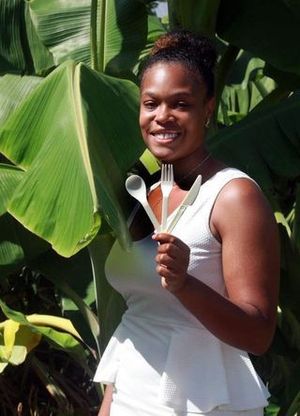 In July, EcoTech Visions was awarded $52,000 in Miami-Dade County County CDBG funds to provide training for its Blue to Green Collar fellowship program.  The Blue to Green Fellowship is a second-chance program for formerly incarcerated adults who have blue collar certifications such as electrician, mechanic, AC repair, carpentry and other trade skills. This fellowship is also available to veterans. “Who better to install solar panels than the electrician who already has the basic skills, who better to create electric motorcycles than the mechanics who have been toying with the idea for years,” said  Gibson, who has been working passionately on EcoTech for nearly two years.

Gibson was also awarded the Gulf Coast Fellowship, selected as one of five fellows from a pool of 500 applicants from Texas to North Carolina to represent the region as an ambassador for Southern “Ecopreneurs.” The Gulf Coast Fellowship comes with a $40,000 award to support her research and incubator development at EcoTech Visions.   Gibson said she was also been selected by the Peter Lang international publishing group through the University of New Orleans to publish a book highlighting the work of Miami’s blue collar to green collar conversion process, with publication planned for next spring.

In collaboration with Miami-Dade Commissioner Jean Monestime and his green corridors plan, EcoTech Visions nurtures a growing collective of “EcoPrenuers” from across South Florida and the country, Gibson said.  The incubator is located at 667 NW 90th St., in Miami-Dade County's Liberty City, and will contain meeting space, co-working space and offices. It will also have a Kitchen Lab for the development of topical products, and it is currently being used by  Raw and Precisions Barber Club Products; a bio-plastic molding lab for EarthWare’s  biodegradable tableware; a hydroponics lab and garden; and a mechanics lab, currently occupied by Aeolus. Gibson believes that with nurturing, these companies can grow and provide jobs in low-income areas.

The county grants require matching private funds; EcoTech is crowdfunding for the private funds on the Global Giving platform. Donations can be made at http://www.globalgiving.org/projects/create-50-new-jobs-in-impoverished-miami-areas/ “We are so excited and so close to our goal,” Gibson said.